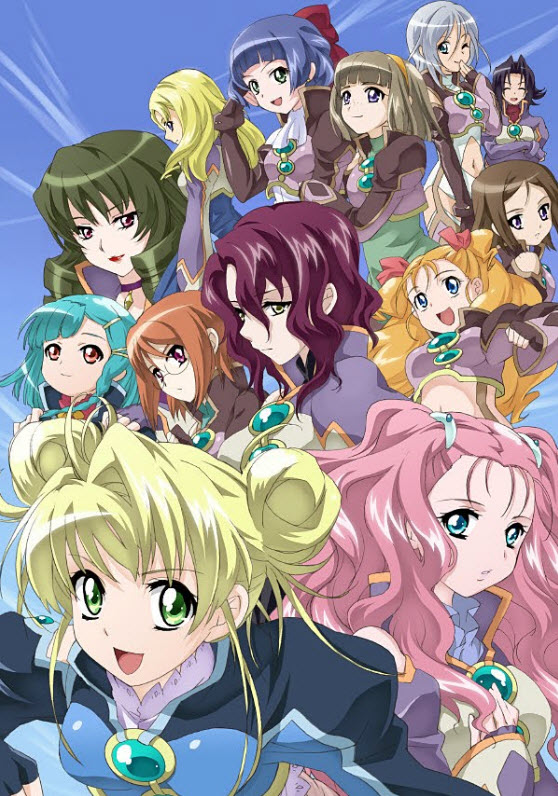 My first exposure to Simoun came about 10 years ago, when many of my online friends had been discussing the series. As my friends were fans of cute, sexy girls, and girl-girl relationships of both the Ikkitousen and Maria Watches Over Us variety, at the time I had felt it difficult to genuinely gauge the series based on their positive responses. Though my wariness caused me to set aside Simoun as an afterthought, more recently it was chosen for me to review as part of the 2015 Reverse Thieves Anime Secret Santa. Having finished the series  I realize now that I had unfairly judged Simoun for its surface qualities, and that is in fact a very strong, emotionally-oriented science fiction story that fits in and exemplifies a long and evolving tradition of science fiction anime and manga.

In the world of Simoun, everyone is born a girl and choose their genders when they become adults. The main character of Simoun, a teenager named Aer, joins the Sibyllae, priestesses who fly divine vessels known as Simouns. The Simouns and the priestesses, normally meant to fulfill a religious role, are also thrust into conflict because their vehicles can be weaponized, though unlike conventional crafts they fight primarily by inscribing patterns across the sky that trigger magical effects. The key to the Simouns, and why Aer and the others are chosen to be Sibyllae, is that they can only be piloted by those who have yet to become adults. Simoun Sibyllae form close bonds with their co-pilots, signified by a kiss before they take flight.

Sometimes there will be an anime where where you can maybe argue that it’s concerned with gender and sexuality, women’s rights, and other similar topics, but that requires a fairly loose reading. Simoun is not one of those anime. It is a work, and a world, where questions about sex, gender, and sexuality are front and center. For example, while it’s not difficult to see why Simoun is labeled as a yuri series, in many ways it defies that categorization. Though everyone enters the world as a girl, the paths they make towards their ultimate choices are contingent upon the circumstances of their world, who they fall for, and how they go about navigating their lives in general. Children who fall in love as girls might both become women, or men, or any combination.

I have to stress how much this series plays with the ideas of gender and sexuality, because it’s such a major factor in Simoun. Girls, as they become adults, slowly transform into their new bodies, so a girl, even a buxom one, will only start to resemble a man after a few years. While the idea of transitioning between sexes is nor considered the norm in our world, in Simoun this is just the natural way of things, both physically and culturally. One interesting choice Simoun makes to emphasize this fact is that all characters, from children to bearded old men, are voiced by women.

Simoun features a very emotionally and environmentally robust science fiction narrative that interestingly is tied strongly to the emotional weight of its characters. Romance is a part of their world, but it’s not their entire world. Other countries attack Kyuukyoku because the Simouns do not pollute the sky like their own aircraft. The war itself is ever-present, and the Syballae put themselves on the line, but they’re shown to also be somewhat disconnected due to their positions as religious figures. The girl-girl kissing that happens before every battle might be seen as a thrilling yuri moment, but it’s not necessarily the case that the characters need to form romantic relationships to fly their Simouns.

The very power afforded those who have yet to become adults, the power of potential, is integrated into the very core of the narrative and its explorations of this alternative universe. Even the Simouns themselves have a certain bizarre quality in their designs that make it difficult to ascertain how much they’re truly divine aircrafts and how much they’re simply highly advanced technology.

Part of the reason I had my slight misgivings over Simoun back then were that the character designs are very reminiscent of more fanservice-oriented series. While I myself like the designs, and Simoun does not have a great amount of sexual allure on display, it’s enough in its promotional materials and its general aesthetic that one could,  even while watching the show, take only shallow titillation from it. This isn’t inherently bad, but I can imagine there are others like myself who approached the series with an eyebrow raised because that was all it appeared to be. Moreover, there are elements that might have come across as merely fulfilling certain fetishes, such as large age differences, incest, and more. However, they are for the most part developed well, and exist as a few of many possible relationships in the world, and just in general I do not feel like they hold back Simoun to any large degree.

Overall, I would highly recommend Simoun to just about anyone, but especially those who want to see an anime that fosters thought and discussion. It presents a unique and robust world of utopian/dystopian imagination full of limitations, possibilities, and unique characters.

6 thoughts on “[Anime Secret Santa 2015] The Possibilities of Adolescence: Simoun”