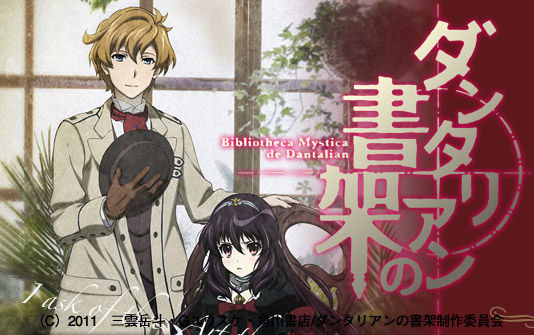 The existence of the term chuunibyou is fascinating to me. Most famously used in the series Chuunibyou Demo Koi ga Shitai, it basically means someone who has the aesthetic sensibilities of a middle school student. What this translates to is a desire to feel special, to believe that there is more to one’s life than its simple and mundane surface, and this is most frequently portrayed in Japanese media as characters who claim (or like to pretend) that they have magic powers, cursed body parts, and have access to the “Akashic Records.” What is maybe less talked about, at least on the English-speaking side of the things, are the works that spawn this kind of sensibility in the first place. What an American anime fan might label as “anime as hell” can often also be called “chuunibyou,” and it’s from this perspective that I’d like to talk about Mystic Archives of Dantalaon.

Originally a light novel series, Mystic Archives of Dantalian takes place post-World War I. Hugh Anthony Disward receives a key and instructions from his dead grandfather to become the new Keykeeper of the “Bibliotheca Mystica De Dantalian.” There, he meets a young girl in gothic lolita clothing named Dalian, and discovers that the Mystic Archives are a collection of “Phantom Books,” each of which possess fantastic, supernatural abilities. As Keykeeper, Hugh (along with Dalian) must pursue cases of Phantom Books run amok, using the power of the Archives.

Just from the basic premise alone, there’s just a lot of “this world is not as it seems” sensibility, but it doesn’t stop there. The anime’s visual presentation, akin to Gosick or Croisée in the Foreign Labyrinth, emphasizes a dark and moody atmosphere. The fact that Hugh accesses his powers by plunging his hand through a large, transforming keyhole in Dalian’s chest, as well as the fact that use of those powers comes from reading mystical books with flowery prose aloud, pushes the series into clear “chuunibyou” territory.

However, one thing that stands out to me about the series is actually how Hugh is presented as a character. Although Hugh has these supernatural abilities, he himself seems like a normal fellow. This isn’t to say that he’s bland or generic, but rather that he presents himself as calm and fairly level-headed without going into “perfect stoic badass” territory or “generic everyman.” The result is that Hugh, while having access to chuunibyou qualities, doesn’t encourage chuunibyou behavior through his demeanor. Even when reading from the Bibliotheca Mystica de Dantalian, he comes across as a regular guy. If one were to pattern themselves after him, it would come not with an overwrought sense of self, but more like “just a dude who happens to have powers.”

That’s not quite true for Dalian. Not only is it hinted strongly that she’s older than she looks, but she combines many of the qualities that can inspire others (specifically chuunibyou) the desire to be her. Her words typically imply that she’s much older than she looks. She is the gateway to these magical archives that house the most forbidden knowledge of the universe. Even her gothic lolita aesthetic works in this direction. Dalian exudes mysteriousness, and I think you can easily find the kinds of characters that are indirectly parodies of her type: Kuroneko in My Little Sister Can’t Be This Cute, Kobato in Haganai, and so on.

As an aside, I wonder why so many Gothic Lolita characters end up being similar in Japanese media. In terms of actual real-life wearers of Gothic Lolita fashion, I’ve come to learn that a lot of it has to do with wanting to defy or push back against the expectations placed upon people in terms of appearance, sexuality, age, and other related areas. In anime and manga, the Gothic Lolita often combines a recurring mix of qualities that contrast innocence and maturity. Dalian speaks with an air of authority, but perks up like a kid at a candy shop when the prospect of eating delicious sweets shows up. Victorique from Gosick behaves the same way, as does Shinku from Rozen Maiden. The idea of the Gothic Lolita character carries with it not just a visual personality but also behavioral elements as well, and I wonder to what extent the two sides inform each other to perpetuate this character type further.

My discussion of Mystic Archives of Dantalian isn’t a criticism against the series for being chuunibyou, or that only those who are interested in works like that could possibly enjoy it. The anime has a lot going for it, from its atmosphere to its mysteries, and it overall makes for an involving and entertaining work. What the chuunibyou elements grant Mystic Archives of Dantalian is a kind of self-seriousness that can be overwhelming at times, but can also be welcome when one wants to enjoy a story that revels in the idea of the unknown.

5 thoughts on “Mystic Archives of Dantalian and that Chuunibyou Feel”