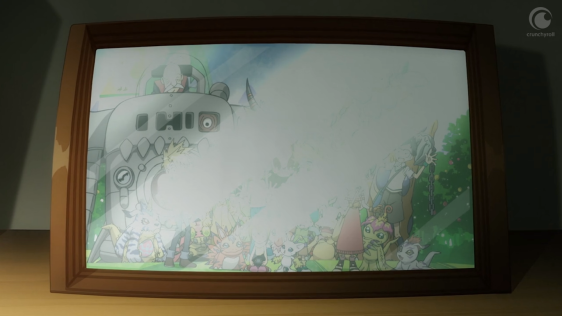 Digimon Adventure, known around the world as simply Digimon, is an anime that helped to define a certain generation of fans. For many, it was either the anime, or the the other anime, relative to its thematic rival, Pokemon. Where Pokemon was about traveling in a world where monsters and humans co-exist, and the stakes were generally about winning tournaments, Digimon was about traveling to an alternate digital world of monsters and saving the world. Where Pokemon generally had a core cast of three, Digimon had over twice that amount. Perhaps most important for our purposes, where Pokemon‘s characters seem to remain eternally young, Digimon‘s characters would age.

This brings us to Digimon Adventure tri., a direct sequel to the original two Digimon anime. Taking place with its main cast now older and in high school, main character Yagami Taichi (Taichi Kamiya in English) and the others have long since lost contact with their old Digimon friends as they transition from childhood to adulthood. Suddenly, Digimon start appearing in the real world, prompting the old team to reunite with the Digital World. 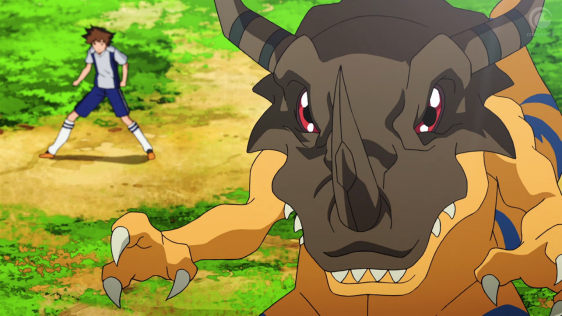 Digimon Adventure tri. is very intentionally a more mature series than its prequels, though not in the sense that it’s supposed to be “darker.” Rather, between the more subdued character designs, a general aesthetic that’s closer to the Hosoda Mamoru-directed Digimon movies than the TV series, a new version of its beloved theme song Butterfly featuring hints of melancholy, and just the portrayal of the subtle turbulence that comes with being of high school age, Digimon Adventure tri. is aimed towards the young fans who are now adults themselves (or close to it). The series says, “We’ve grown up with you, and we know what it’s like.”

For example, Kido Joe, the straight-laced and responsible one, is now being consumed by college entrance exams, and Taichi himself feels like he can no longer charge ahead like he used to when he was the de facto team leader of the Chosen Ones (“DigiDestined”). This is not to say that the new series is a total downer, stripped of any of the joy and wonder of the original anime. What I think they’re going for, instead, is a kind of rediscovery of those simpler and more magical times, while grounding that kind of experience in the process of becoming adults.

Digimon Adventure tri. actively works to maintain a strong connection with the original series, and a lot of attention is paid to continuity as a result. Whereas Taichi and the older kids have their original DigiVices, the portable tools based on the original hand-held Digimon virtual pet, the younger Hikari and Takeru (“TK”) have different ones, a nod to their continued battles in Digimon Adventure 02. Somewhat similarly, the story is set very intentionally not in 2015 but somewhere in the mid-2000s, as reflected in the technology. Most cell phones are flip phones with number pads, and no smart phones are in sight. It’s not like failing to do these things would have made it a worse series, but it shows that, to a large extent, Digimon Adventure tri. aims to evoke strong feelings of nostalgia for both for the franchise itself and for those who know what it’s like to be a teenager.

There are a couple of notes that I feel the need to point out for the die-hard fans (I know you’re still out there). First, if you watched this series dubbed in English (or perhaps other languages, I’m not sure), the lack of dialogue and constant banter might seem unusual or even off-putting. The original Japanese versions of Digimon had a lot more “dead air,” that is to say long moments of silence, and adding music or dialogue to fill space is an old American television tactic that you could also see in the dub for Pokemon. Digimon Adventure tri. uses even larger periods of silence and its unsteady atmosphere (perhaps all the better to convey that feeling of becoming adults), so it’s something to expect going in. 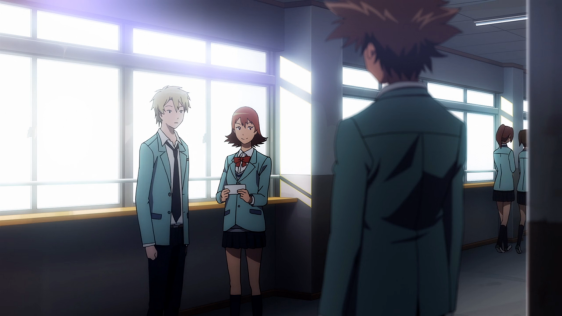 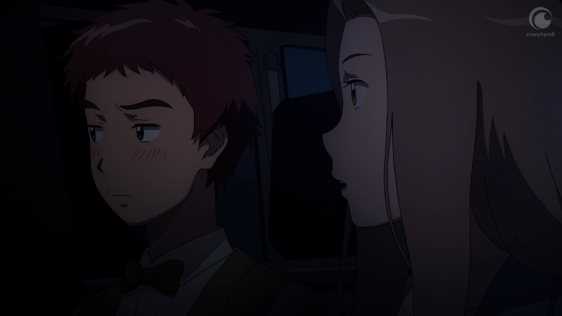 Second, you should know that the plains of the shipping wars are revived and more serious than ever. While the previous series had some hints of romance (or maybe more if you count the controversial time-skip ending of Digimon Adventure 02), relationships are nearly front and center in Digimon Adventure tri. There’s a clear love triangle between Taichi, Sora, and Yamato (probably the site of the most fierce battles). Koushirou (“Izzy”) clearly has a powerful crush on Mimi. Takeru and Hikari tease each other about their mutual popularity among the opposite sex. If you had any stake in these old battles, the series might very well draw you in like honey.

As of this first movie (split into 4 episodes on Crunchyroll), it’s clear that Digimon Adventure tri. won’t give viewers the same experience as the original anime from over a decade ago. Unlike Pokemon, which tries its best to maintain the same constant feel (though to be fair there have been subtle changes in that series over the years), Digimon Adventure tri. wants you to know that the characters have grown, that their inner and outer (and perhaps even digital) worlds have changed as a result, and it’s inviting you back to take a look. The next film/batch of episodes won’t be out until March 2016, so you’ll have plenty of time to catch up. 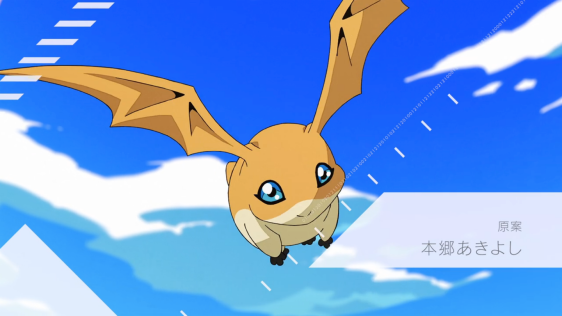 2 thoughts on “Growing Up in a World of Monsters – Digimon Adventure tri. 1: Reunion”