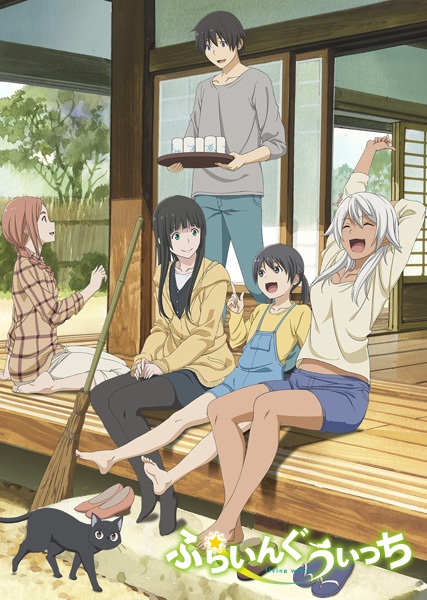 When it comes to stories about witches, it’s quite common (and perhaps even expected) to have magic be prominent. Whether it’s American sitcom classic Bewitched, Archie’s Sabrina the Teenage Witch comic, or an anime and manga like Witch Craft Works, the influence of spells and sorcery is, if not grandiose, at the very least quite large. The anime Flying Witch is a much mellower series in comparison. As a show where just the lightest of touch of the supernatural appears, it makes for a most delightful series.

Adapted by J.C. Staff from the manga by Ishizuka Chihiro, Flying Witch follows the daily life of Kowata Makoto, a teenage witch who moves in with her cousin Kuramoto Kei’s family as part of her coming of age. Residing in Aomori Prefecture in the Tohoku region of Japan, the people there still have a fairly strong connection to nature, and just going back and forth from school is enough to take in the greenery. For the most part, magic doesn’t make much of an impact, but when it shows up it’s just enough to make their world feel a little bit more unusual, and a little bit more wonderful.

Though the show consistently succeeds at its sparse but effective interaction between the human and witch cultures, the most memorable example has to be in the very first episode. Makoto is walking home from school with her new friend, Nao, when she sees an unusual plant. For anyone who’s familiar with stories about witches and wizards this is a red flag. Sure enough when she gives it a hard tug a mandrake pops out and gives its shrill cry.

As Makoto cradles the demon plant, she cheerfully explains to an aghast Nao that it’s a good thing that they found a young Mandrake because an adult one can literally send people to the hospital or worse. The anime doesn’t stop being this fairly laid-back series, but the result is that the tiniest bit of magic feels that much more amazing.

What also helps Flying Witch is that all of its characters, guys and girls, are extremely charming. Makoto’s older sister Akane is a more experienced witch whose penchant for mischief contrasts delightfully with her younger sibling. The Kuramoto family is entertaining all around, whether it’s the dad’s thick Tohoku accent being indecipherable for Makoto or Kei trying to get his little sister Chinatsu to try more vegetables.

The fanservice in this show also has a deft touch akin to its use of magic, to the point that it might not even be right to call it fanservice. Just to be clear, generally speaking the female characters in this series are all extremely attractive, but Flying Witch never goes out of its way to show them off. When it focuses on Makoto or anyone else, the anime just lets the audience see how nice they look without lingering or leering.

Another notable aspect of Flying Witch is its focus on Aomori, because it at times feels like a promotion for the prefecture. In fact, it makes me wonder if this is one of the reasons it was adapted from manga to anime. The Tohoku region has in recent years been known more for the Fukushima disaster, and a lot of effort has been put into reviving the region in terms of agriculture, tourism, and more. A series like Flying Witch might be just the thing to really get people to visit Aomori and Tohoku again.

Overall, because of how delightfully mellow yet powerful the show’s humor and characters are, Flying Witch has become one of my favorite anime of the year. When I get the opportunity, I’m definitely going to pick it up, possibly in multiple formats. If you want to check it out, you can find the entire anime on Crunchyroll, and Vertical Comics is releasing the manga in 2017.