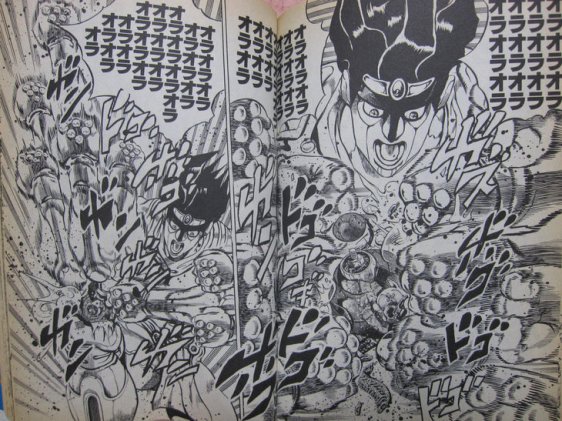 How much does time pass when the mighty Star Platinum punches an enemy Stand in JoJo’s Bizarre Adventure? There are many factors to consider, such as how much time has passed in the show itself, as well as how time is being manipulated within the series’ universe itself. Another important element is the fact that the anime is an adaptation of a manga, where the flow of time is abstracted by manga’s existence as a 2-D paper medium.

As far back as Tetsuwan Atom, adaptations of manga have been a common mode of anime production. Manga act as a spring of new stories to present, and the jump from the comic book format to animation opens up many opportunities. An anime can try to forget its own path through interpretation or divergence from the manga (such as both the Ghost in the Shell films and Stand Alone Complex), or they can faithfully attempt to recreate what exists in the original. However, while the latter cases might often appear to be “direct transplants” of the manga to the screen, the act of having to take a physical and spatial image such as a panel and assign to it a finite amount of time can greatly change the impact of a given scene in spite of the desire for faithfulness to the source material.

In a general sense, having to time dramatic beats for an anime often requires playing around with the contents of the manga. For example, in an episode of Dragon Ball Z, filler sequences (such as the infamous minutes-long powering up spots) not only save budget, but can also be a way to make sure the episode ends on a cliffhanger. On a broader multi-episode scale, Initial D: Fourth Stage does something similar by reversing the order of the final two opponents. Originally, the manga has protagonist Takumi race against a man known as “God Hand,” while his teammate Keisuke races against “God Foot” afterward. In order to make sure the series ends with a climactic battle for its hero, the show has God Foot go first instead.

One consequence of this is that there can be moments when a series feels as if it’s dragging. Sometimes it’s successfully padded out or rearranged so that nothing feels particularly off, but in other instances it is possible to sense an uneven rhythm or pacing.

This notion also extends to the transform of panels into time. Consider that there is generally no specific amount of time that is said to pass in a given panel in manga, or indeed comics in general. What makes a panel feel “fast” or “slow” is partially about how long one’s eyes linger on a panel, and it’s dependent on the amount of content there and the flow of the page. But because time exists differently in manga, things that seemingly pass quickly on the page take much longer on the screen.

A common example of this would be the frantic explanations of special moves in an action or sports series. Because we tend to read more quickly than we speak, it is possible to believe that an elaborate speech or thought is being made within the span of a ball being passed from one player to the next. However, commit that to concrete time in an anime, and suddenly you begin to wonder why no one is doing anything as they talk for 30 seconds. To appreciate those moments, it requires a viewer to understand that time portrayed is not literal. This is the case even with series not adapted from anime. It does not “really” take Voltes V two or three minutes to combine together, or for Erika to become Cure Marine.

So when what is a single, snappy panel in manga gets stretched out into an extended scene in an anime, it can dramatically effect how a person can feel about a particular title. I find this to especially be the case with comedy series. Take Azumanga Daioh, a four-panel series. In the manga, there will be a comedic moment that lasts for only one or two panels, such as Sakaki rolling on the floor while holding a wild Iriomote cat. In the anime, this becomes a full-on extended display of non-stop rolling with musical accompaniment. A small moment becomes a big one thanks to time. A more recent title would be Nichijou, where the staccato presentation of the manga’s gags are the equivalent of sharp, quick jabs. In anime form, however, the characters’ movements are exquisitely animated and exaggerated, and the result is a series that is in a way much more physical and almost “luscious” in a sense. While the Nichijou anime pretty much takes things directly from the manga, the two turn out to be pretty different experiences.

My belief is that the unusual handling of the (broadly speaking) space-to-time transition of manga to anime is a likely culprit of why someone might love a manga but hate its anime (or vice versa!) even if the adaptation process is largely faithful. It’s kind of like when an actor is cast in a movie based on a book; what was once a nebulous image reliant upon visual/mental interpretation becomes a little more solid and finite.

4 thoughts on “The Transformation of Time from Manga to Anime”