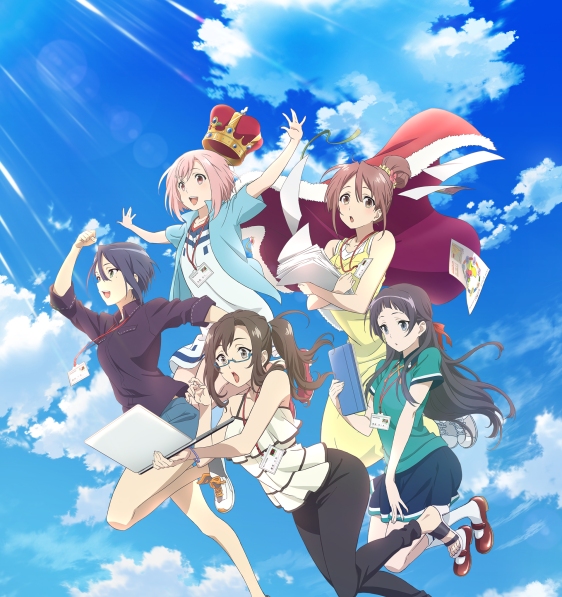 For years, the raison d’etre of the anime studio P.A. Works appeared to be creating intetesting settings as a pretense to showcase cute female characters. Whether it was True Tears, Hanasaku Iroha, Tari Tari,  or something else, they appeared to focus on personal relationships above all else. A more careful look, however, will reveal another major theme permeating many of their works: the declining population of rural Japan, and the complicated effects of tourism on this situation. Now, P.A. Works has doubled down on this idea in their new anime, Sakura Quest.

Koharu Yoshino is a young woman struggling to find work, when she’s been asked specifically by name to come work in the small, virtually forgotten town of Manoyama. Desperate for employment, she takes the offer, only to discover that it was a mistake. But the contract’s been signed, so now Yoshino—along with a group of other young women—are tasked with helping to revive Manoyama.

Much like one of their previous hits, Shirobako, the main cast of Sakura Quest is notably all adult-aged women as opposed to high school girls. When I interviewed P.A. Works at Otakon 2016, they expressed that they’d been wanting to do that as early as Hanasaku Iroha, but trends and the need to make a profit pushed them to stick with the reliable teenage formula. Now, with two series bucking that trend, it looks like they’re eager to challenge that status quo—at least in part.

The use of attractive girls to anchor Sakura Quest means that the series does not fully escape the market forces of young, attractive heroines, but in many ways it also does not pull its punches. Yoshino and the rest of the core cast, consisting of both those new to Manoyama and life-long residents, are confronted with difficult decisions that often leave their best plans only half-formed and arguably doomed to failure by the many considerations they must account for.

Central to this conflict is the contrast between valuing the traditions of Manoyama and its people, and when those traditions stifle the potential for the town to adapt and evolve. Trying to make tourism and local promotion work in a long-declining town is portrayed as a struggle where the gains are few and the solutions are rarely cut-and-dry, if available at all. The series is not necessarily a cynical one, but any progress comes in small steps.  This can be frustrating at times, but it grounds the show in more realistic expectations. After all, if the solution to the rural decline of Japan were easy, we’d probably have seen it by now. It also highlights the idea that, while gimmicks can boost tourism, this is a serious double-edged sword.

Sakura Quest is not one of those gripping anime that keeps you in suspense, or has you falling in love with the girls so hard that you feel compelled to buy their merchandise. It’s a pretty slow burn, and the characters will repeat their mistakes on more than one occasion. However, it’s a very satisfying work in its own way, as it challenges viewers to think about one of Japan’s major problems today, and the myriad factors that complicate it.

2 thoughts on “The Precarious Balance of Tradition and Progress: Sakura Quest”