One of the common criticisms of character designs in anime and manga is that characters often have the same face with variations in hair, clothing, and accessories to set them apart. This is viewed sometimes as lazy, or a sign of a lack of skill or talent, in other words a crutch in lieu of true character proficiency. However, in a number of instances it can be argued that “samefaces” aren’t the same at all, that subtle variations such as the angle of the eyes can suggest enormous differences between two characters.

While sameface certainly isn’t absent outside of Japanese pop culture, I’ve begun to wonder if Japan’s own art history has contributed to not only its presence but also its acceptance. I’ve taken a cursory look at ukiyo-e recently, and one thing that strikes me is that portrayals of both men and women, especially attractive individuals, tend to use very similar kinds of faces, with greater attention paid to—you guessed it—hair, clothing, and accessories.

I’m well aware that there’s a tendency to try and force a connection between ukiyo-e and manga, and I don’t intend to go that route. Stylistically, the two are very different, even if ukiyo-e is a kind of predecessor in terms of being a popular, mass-produced art that emphasized reveling in momentary pleasures. Hokusai manga doesn’t really have anything to do with manga, and the panel progression of manga isn’t really present in ukiyo-e. Also, there is actually quite enormous variation in the depictions of people in both ukiyo-e and manga when you look at the broader picture. That being said, in terms of character design and the priorities present in ukiyo-e I suspect that there’s some lineage at work that seeps into manga on some level. 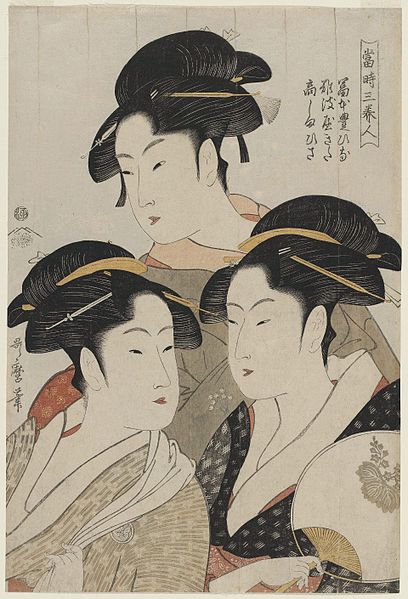 What stands out to me about portrayals of women in ukiyo-e is the amount of attention paid to the hair. While the faces remain absolutely unrealistic (much like manga and anime but in the opposite direction in terms of proportions and what is aesthetically appealing), women’s hair in ukiyo-e prints are frequently rendered with such loving detail to the point of being in some ways hyper-realistic. Similarly, kimono are given bold colors and patterns, and so at first glance what distinguishes two women is everything but their faces.

There are a couple of other things that crop up when reading about ukiyo-e that wouldn’t sound out of place if the discussion were anime or manga. First, while many women in ukiyo-e were portrayed similarly, what was considered the image of the “ideal woman” changed as the years passed by. Second, small variations in facial features and expressions could mean all the difference between a “stereotypical” design and a “realistic” one.

How does this relate to an idea such as kyara moe, where characters’ stories are told almost entirely in how they look and through collectively accepted meanings behind visual elements? When looking at a series like Love Live!, it can seem to an outsider like the girls are just the same template, but those unique features relative to each other make a world of difference.

Of course, all of this is a very preliminary impression. Feel free to prove me ignorant in the comments!