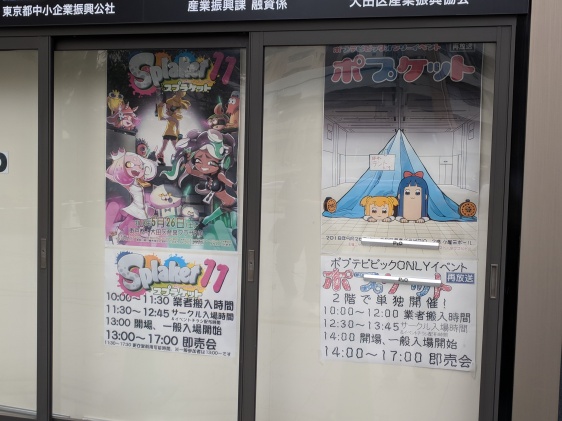 On my recent trip to Japan, I had the opportunity to visit not one but two doujin events at the same venue: the Splatoon-themed Splaket 11 and the Pop Team Epic-themed Popket Rebroadcast. Both were held at Ota City Industrial Plaza PiO, which is the same venue as the Love Live! event I attended two years prior.

Splaket wasn’t overwhelmingly large by any means, but it did get plenty of foot traffic. I actually saw a few parents bringing their young, Splatoon-loving kids there. I like to imagine they were otaku parents introducing their kids, but Splatoon is big enough a series that I’m not sure that’s guaranteed.

What stood out to me most, however, were the ways artists and creators of these doujin works transformed the Splatoon concept to fit their needs. It’s like the world established by the games is just detailed enough to girl the imagination and just open enough to let that same imagination fill in the blanks. I saw detailed weapons catalogs, fashion guides, BL, yuri, straight romance, Callie and Marie, Marina and Pearl, and everything in between. It made me feel what an astounding success Splatoon is in terms of visual aesthetic and design.

The first thing I saw upon reaching Popket was the event catalog—a standard of doujim events. However, when I tried to pay for it, it turned out that the ¥333 price tag meant exactly that amount. It’s based on a Pop Team Epic joke about how animators make only ¥3,330,000 (approximately $33,000 USD) in spite of the grueling labor required. if you wanted them to keep the change, they wouldn’t let you! It was free to enter, but if you wanted that extra item, you had to come prepared.

Given that Pop Team Epic actually had a fair amount of mainstream penetration in Japan, I was expecting a fairly large event, but it was actually significantly smaller than Splaket. I’m not sure why this was the case, but I wonder if it was a combination of factors, like scheduling and Pop Team Epic being a difficult series to parody for the purposes of doujinshi.

The goals of fan works are many, but two are taking the original property to new and curious places, and trying to faithfully extend it such that the characters remain familiar as they’re adventures continue. But Pop Team Epic defies nearly all expectations. How do you parody a work that practically parodies itself? How do you tell jokes on its level? It’s not easy.

What I saw from Popket was less parodying Pop Team Epic and more using it to parody other series. Rather than trying to put Popuko and Pipimu in new situations, the doujin creators mimicked the drawing style of the original artist, bkub, to spoof other works. It reminds me of that artist who keeps drawing parody doujinshi of various series in which all the characters look and act like they came from Fist of the North Star.

It was an afternoon well spent, and a good chance to connect with Japanese fans. As always, I wish there was more of a doujin culture in the US and elsewhere.