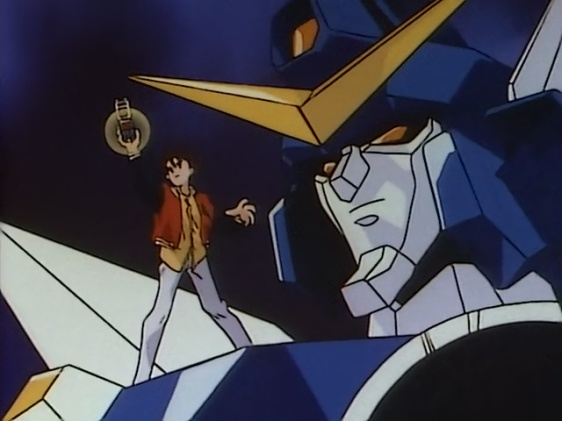 The 1990s Brave franchise—most famously known for its swan song, King of Braves Gaogaigar—is a series of children’s anime centered on boy heroes and their heavily merchandisable giant robots. While the overall quality varies, each show indicates a push and pull between being half-hour toy commercials, displaying impressive mecha animation, telling stories that kids enjoy, and imparting important lessons for young viewers. Over the years, I’ve been told multiple times that one of the turning points is 1992’s Brave Fighter of Legend Da Garn: the third entry and first to attempt a more mature and long-form story. Having finally watched it, I can see a more serious yet also a scattershot approach that belies the competing forces dictating the direction of Da Garn.

Takashiro Seiji is a normal ten year old boy whose mother is a news anchor and whose father is a member of Earth’s Global Defense Force. When a mysterious robot attacks the city, he comes across a power lying within the Earth itself that manifests itself as a giant robot guardian known as Da Garn. As the masked commander, Seiji leads Da Garn, and eventually other robot allies who emerge, against ever greater threats—especially the enemy’s ongoing attempt to rob the Earth of its “planet energy.” There’s an ongoing environmentalism and world peace theme underlying everything, exemplified by a line from the opening theme: “This planet is our cherished ship.”

Due to this show’s opening, I once had a very mistaken impression of Seiji. The way he’s drawn and animated in it, there are times when he looks like an adult. It’s almost as if they either hadn’t decided his age, or figured that making him look 6 feet tall and muscular would make for a more exciting intro regardless of how odd it looks. Whatever the case, my expectations had to be modified, though Seiji’s quality voice acting from Matsumoto Rica (best known as Satoshi from Pokemon) helps keep him an endearing if somewhat typical protagonist.

The robots, in typical Brave fashion, are all about combining. Da Garn combines with a plane and a train to become Da Garn X. Later robots combine together and then get additional partners to combine together. However, they’re also kind of a thematic hodgepodge. Da Garn himself is a police car. He gets plane allies and motor vehicle allies. Then they start introducing robots based on animals, even making it seem like one is going take over as the star of the show, as if someone said, “The surveys say kids like lions!!”

There are so many mecha, and they’re given so few opportunities to show their personalities, that only a handful ever get highlighted, leaving many to be less memorable. In contrast, it’s hard to forget any of the robots in Brave Police J-Decker or Gaogaigar. Even compared to a series like Girls und Panzer (which also groups a gigantic cast into “squads” with collective personalities), Da Garn can feel sparse in terms of characterization. The main exception to this glut is an antagonistic robot named Seven Changer, who (of course) has seven different forms, and whose cool arrogance is delivered effectively by Koyasu Takehito (Dio in JoJo’s Bizarre Adventure).

Speaking of villains, I’m not sure if I’d call them particularly strong, but they are definitely memorable, and they’re explored in great detail. Many of their identifies are initially a mystery, and they’re woven into the simultaneous small-town/global atmosphere in interesting ways. As the series progresses, their stories are increasingly a part of the narrative, and it allows Da Garn to touch upon ideas that would make less sense with Seiji or any of his friends. In fact, I’d argue that the anime doesn’t really find its footing until it starts to do more with its villains.

Brave Fighter of Legend Da Garn ends up being the kind of work that is best viewed as taking a step beyond its trappings and its immediate predecessors while still somewhat beholden to them. It’s polished in some areas like visual presentation and general momentum of its narrative, but it sometimes succumbs to the weight of all the different expectations placed upon it. But while it may be outdone by later Brave series, it’s still a joy to experience, quirks and all.