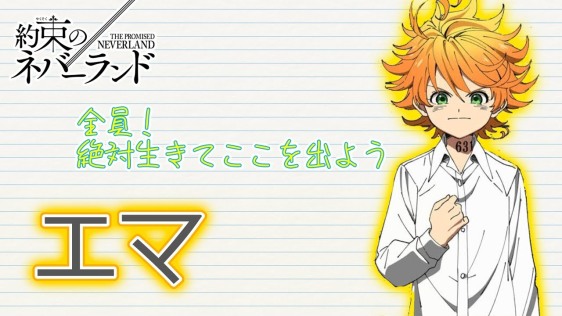 With the first season of The Promised Neverland anime over, and having personally caught up to the manga as it’s throwing around major revelations, I thought it would be a good time to write about why I think Emma is one of my favorite protagonists in recent memory. I’m going to keep details vague to avoid spoilers for both anime viewers and manga readers, so hopefully everyone can enjoy.

By virtue of being a female protagonist in a Weekly Shounen Jump manga, Emma is an exception in a magazine that is, at least on the page, overwhelmingly male-dominated. In this position, it would be all too easy to make her a passive character who supports others, but what she contributes to The Promised Neverland makes her the heart and soul of the series.

Emma’s character is cut from a more traditional shounen hero cloth: she’s idealistic, compassionate, prefers actions over words, and is unusually good at making friends. But while this attitude is often a surface point for a lot of characters, Emma’s attitude runs directly into the central conceits and challenges of her own series. To believe in “helping everyone” in a harsh world can seem hopelessly naive, yet that conviction is what gives her strength.

The important thing, however, is that as much as she seems to possess a “have your cake and eat it too” puppies and rainbows mentality, she’s not unrealistic or devoid of pragmatism. She understands that her path isn’t the easy one, but at the same time believes that being all too ready to sacrifice others “for the greater good” leads down a much darker path. In maintaining this view, she brings those who would otherwise dwell in the murkier areas of humanity into the light.

Because of her outlook, she somewhat reminds me of Eren from Attack on Titan, albeit with a relatively cooler head on her shoulders and less proclivity for violence. Emma, like Eren, prompts and motivates others to go beyond their comfort zones through her actions. Unlike Eren, however, Emma is motivated less by anger and more by love.

Emma doesn’t do the impossible. Rather, by pushing her own limits and maintaining her compassion, she makes clear to herself and everyone around her that their perceived boundaries (whether internal or external) can be challenged. In a world seemingly made up of constant dichotomies, she strives to find a third, fourth, or even fifth path.