Super Smash Bros. creator Sakurai Masahiro has long frustrated the game series’ competitive community. A developer whose motivation is to bring in players daunted by the hardcore reputation that precedes fighting games, Sakurai is not against competition inherently, but places priority in ease of access and play for Smash Bros.

A common response from the competitive community is that Nintendo should fully embrace the competitive aspect of the series and push it to the forefront. The argument, generally, is that the competitive fans are more loyal, and it won’t affect the overall reputation of the games. Casual players will still approach it without tournament play, remaining blissfully ignorant. I think this is naive, or maybe even bullheaded.

It is true that any game that can act as a test of skill will inevitably lead to players who are better than others. And yes, Smash has proven itself to be viable for tournament play, despite what detractors say. The issue, however, is how having the series touted as a hardcore, competitive game influences the overall image of it, especially in an age when information proliferates so rapidly.

I love competitive Smash. I don’t play as much as I used to, but I still follow tournaments and keep up with discussion. When I go on the Smash subreddit, I find loads of valuable information on top players, tier list debates, upcoming tournaments, and more. More scarce, however, are posts about the casual side of the games: item shenanigans, stories of playing free-for-alls with friends, etc. While the subreddit is not devoid of less competition-oriented content, it does feel as if those posts get pushed down. I wouldn’t be surprised if more casually minded fans are afraid to post there.

In contrast, while Nintendo’s unorthodox shooter Splatoon has an active and robust competitive element to it, the Splatoon board on Reddit only has about 10% of posts devoted to tournaments and high-level play. While I sometimes wish there was more in-depth discussion of weapons and maps, it also means the outward reputation of Splatoon fandom is more light-hearted and focused on contributions like fanart, lore speculation, and general love of all things squiddy.

Neither subreddit’s approach is inherently better, but it’s clear to me that a game’s presentation and how its fans interpret that presentation into their own hobbyist displays has an affect on a game’s image. People who go to r/smashbros will think that fans mainly care about 1-on-1 competition, while those who visit r/splatoon will come away with the idea that its fans are less obsessed with wins and losses.

Both series see success in casual and competitive domains, but Smash is a case of the competitive reputation encroaching on the chance of casual community interaction a bit more. I believe this is what has long concerned Sakurai, and if he could achieve the casual/competitive balance of Splatoon, then he would. 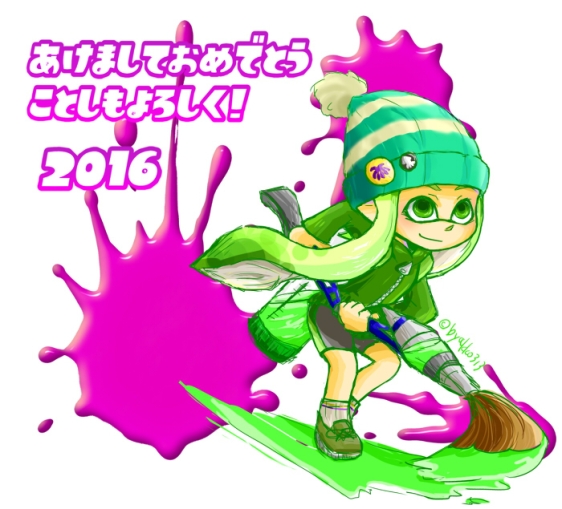 The first time I saw Splatoon being announced at E3 2014, I had two reactions. First, “this game looks amazing,” and second, “I could see this game having a ton of competitive potential.” The new and refreshing approach to the shooting genre combined with the inherent concept of space control that comes with having your main weapon, ink, be also your goal and your primary mode of transportation had me envisioning clutch plays and highlight reels that would go down in history.

Since then, Splatoon has actually indeed worked to cater towards the competitive side of its player base, with patches, versus modes, and more, but I was surprised to see that its main format, a “Turf War” where the objective is to cover as much ground with ink as possible, does not have a ranked option, and in fact is considered by many in the competitive community to be an inferior format. I find the Turf War to be closest to the essence of innovation and possibility that Splatoon offers, and I actually feel kind of sad that it’s thought of as being incapable of supporting competition.

Keep in mind that, as I say this, I am not begrudging the competitive players for going with a format they prefer. I am quite far from being a skilled Splatoon player. I also understand that the reasons they might not like the Turf War format are probably valid. The argument is that only the first 30 and last 30 seconds really matter, and that it isn’t relevant to competition if a given way of playing is “against the essence of the game.” After all, Super Smash Bros. is designed for four or more players on a variety of stages with items on, and that competitive community has worked to fight the stigma that its players are playing the game “wrong.” Rather, in a way, what I’m expressing is rather selfish: I like the world of Splatoon where people can both attack and avoid conflict, or in a sense compete and not compete, in the exact same space, even if that doesn’t make much logical sense.

One of the major appeals of Splatoon, I believe, is that it provides a nice aesthetic and environmental alternative to mega testosterone headshot shooter games. Instead of getting bloodied, you get inked. Instead of every weapon being geared towards death and destruction, the question is if they can properly cover the ground in various hues. Theoretically, one can play and even succeed in this “shooter” without even shooting or attacking at all. However, in the ranked modes, Splat Zone, Tower Control, and Rainmaker, the specific mission focuses make direct conflict more of a necessity. You must remove their control, and the only way to really do so is to attack their position or to prevent them from getting close through person-to-person combat. Gone is all potential to compete through pacifism.

I don’t mean to say that Splatoon shouldn’t have guns, or that shooting should be removed from the game. After all, my favorite weapon is the N-ZAP ’89, a replica of the red-colored NES Zapper, because of its versatility in both fighting others and covering the ground in ink. Instead, what I’m aiming for is the possibility that Turf Wars are more likely to provide a space, or a mode, where very different philosophies can come into play without the absolute need to divide them, like Smash Bros. does (“For Fun” vs. “For Glory”). The people who believe shooters are great because you get to go all Rambo on your opponents can get just as much of a kick out of Splatoon as the people who love the strategic space control aspect or those who cherish just being able to run around with a giant roller and not have to point or aim or anything. I know this idea is inherently flawed, and the players themselves don’t necessarily want this, but I still believe that Splatoon can stand as this symbol where wildly different ways of playing can co-exist.

In game studies, there is a distinction made between “games” and “play.” The essential idea is that in games, you have a goal, a motivation or driving force that you aim towards, whereas play is more freeform, ever-changing, unbound by rules. In other words, think of games as football or baseball, and play as Calvinball. While Splatoon is much closer to “game” than it is to “play,” especially in comparison to something like Minecraft, I think my desired image for Splatoon is one that is in the territory of games but leans towards play. Competition is possible, but competing by not competing would also be an available option.