In terms of representation, the Precure franchise has always been in an interesting place. To say that it’s all about reinforcing gender stereotypes isn’t true, but neither is claiming that the series has no stereotypes at all. The girls fight on their own terms, dream big, and the importance of romance waxes and wanes from one series to the next. However, they’re also often in “girly” colors like pink, they have a tendency to wear high heels, and pale skin has been the default for every prominent Cure since the very beginning. Change has occurred over the years, mostly for the better, but there’s a constant push and pull between challenging social norms and following them for mainstream appeal.

As the very first dark-skinned major Cure in franchise history, Star Twinkle Precure’s Cure Soleil (real name Amamiya Elena) is in an interesting position. Not only is Japan still a country where the mainstream beauty standards assume whiter skin to be better (though this is by no means universally agreed upon), but more conservative sections of Japan view “Japanese-ness” as a unique and special phenomenon. In their eyes, even if you were born and raised in Japan, being Korean, Nigerian, or anything else disqualifies you from being “truly Japanese.”

In contrast to these views, Cure Soleil is presented as having partial ethnic origins from Mexico, her family flower shop “Sonrisa” and her cathphrase (“Chao!”) being the primary indicators. She also isn’t talked about like she’s a foreigner. Elena was born in Japan and has lived there all her life, and she’s not exoticized by her friends or the show itself. Further, having dark skin and being considered one of the most beautiful and popular girls in school sends a strong message to those growing up in Japan who don’t look like the assumed default. This is a far cry from the previous attempt to have dark-skinned Cures, as the briefly shown Wonderful Net Precure from Happiness Charge Precure! are barely tan to the point that it’s hard to tell that they’re Indian at first glance. 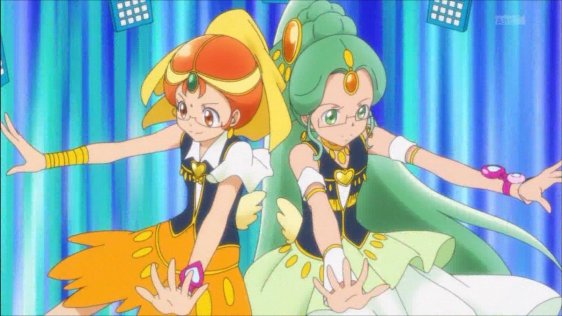 As a country where its well-known ethnic homogeneity is reflected in its media, stereotypes about foreigners are unsurprising. In that context, I have to wonder if the reason Cure Soleil is a part of Star Twinkle Precure is because dark-skinned women have made an impact in recent years. There’s Miss Japan 2015, Miyamoto Ariana, who is half-Japanese and half-African-American. More recently, professional tennis player Naomi Osaka (half-Japanese, half-Haitian) has been taking the world by storm and has even appeared in commercials in Japan. Whatever the actual case may be, I hope that characters like Elena can help normalize acceptance and celebration of girls and boys who look like her.