With the recent release of Mortal Kombat 9, a lot of beloved figures in the Mortal Kombat franchise have been re-designed to look both modern and reminiscent of their very 90s character designs in an effort to bring the series back to its old school roots. Remembering that Sonya Blade’s design was absolutely awful in the previous game, Mortal Kombat vs. DC Universe, sporting the most ridiculous shirt ever, I wondered how they would portray her in this iteration. While the new design is an improvement, it makes me realize that Sonya is actually just a terribly-designed character. 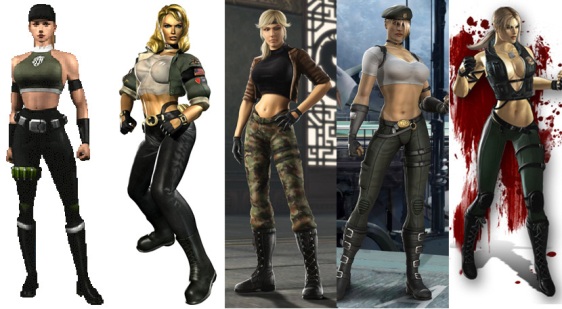 Here is Sonya throughout her 3-D fighting game history, away from the live actor portrayals that characterized Mortal Kombats 1 through 3. If you did not tell me that they were all supposed to be the same character, I simply would not be able to tell. Nothing is consistent about her, short of the fact that she’s blonde, has big tits, and shows an exposed midriff. Sonya Blade is a terrible design because she is a non-design.

While she could be criticized for having an over-sized, unrealistic chest and ridiculously skimpy outfits, that’s not really the point here, as the scantily clad and jiggling girls of Dead or Alive share those properties in spades and yet are still distinctive even when they’re wearing 1 cm-thick bikinis and taken out of a relative comparison with each other. Nor is the problem that her design is too generic, as the Virtua Fighter series is all about cookie-cutter characters, and yet whether it’s the blocky and outdated graphics of Virtua Fighter 1 or the more recent Virtua Fighter 5, Sarah Bryant, a fellow fighting blonde, is still recognizable. Chun-Li can appear in Street Fighter Alpha younger and sporting a different outfit and still look like Chun-Li, and she also successfully made the transition to 3-D with her very iconic look and style.

On a broader scale, video game characters rely on a certain degree of iconic visualization, and though this is more easily done with a mascot like Mario or Sonic, it’s still possible with a more realistic figure. Sub-Zero and Scorpion show this, despite the fact that they both started out literally as the same character design with different colors. it’s clear that Sonya simply never had anything beyond her rack and her belly button to distinguish her. Back in Mortal Kombat 1, when she was the only female character, this arguably could have been sufficient, but as more and more girls have appeared in the franchise over time, also with large breasts and bare midsections, it really makes it obvious that she wasn’t thought through thoroughly.

For a further comparison, take a look at this image Sophitia Alexandra from the Soul Calibur series which I conveniently obtained from elsewhere. Although her design has gone off the deep-end in recent games, it’s very clear that all of the above figures are supposed to be the same person, even when drawn by different artists. If I were to make an educated guess as to what makes Sophitia work but not Sonya, I’d say that it has to do with the fact that Sophitia was designed in the first place with certain key visual elements like her sword and shield, skirt, and gentle demeanor, and even when next to her somewhat similar sister Cassandra, you can still tell the two apart by how their designs convey their personalities. It can be as simple as that, so that when they’re given makeovers in later games, a person can take one look without being told specifically who it is and say, “Aha, that’s her! …She looks terrible!”

9 thoughts on “Sonya Blade is an Awful Character”