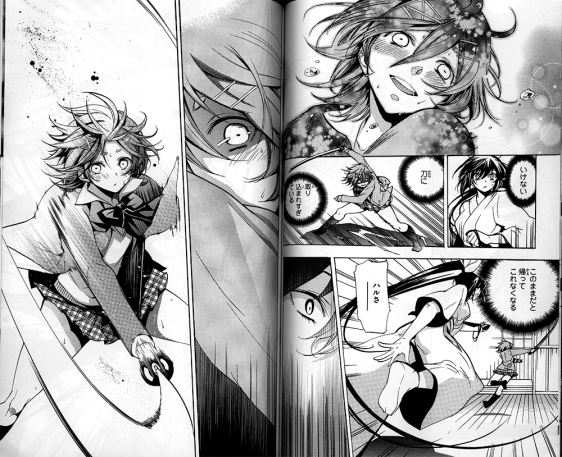 There’s a popular joke when it comes to manga that is rooted in the harsh realities of failure in the industry. Known as “Our Battle Continues!”, it is the signal of a title that has been abruptly canceled, and usually shows the entire cast of characters in the last panel charging towards the “unknown.” The Attack on Titan anime even references this, as the final end card for the first series is an image by the original author, Isayama Hajime, parodying the idea. Sadly, there are countless manga that have had to resort to this, including those which showed great potential but were nevertheless unsuccessful.

In the case of the 5-volume Haru Polish from 2011, it’s clear that there was neither a lack of talent nor a lack of interesting ideas or characters that led to its “Our Battle Continues!” ending. Rather, it was simply unable to attract a large enough audience to keep going. 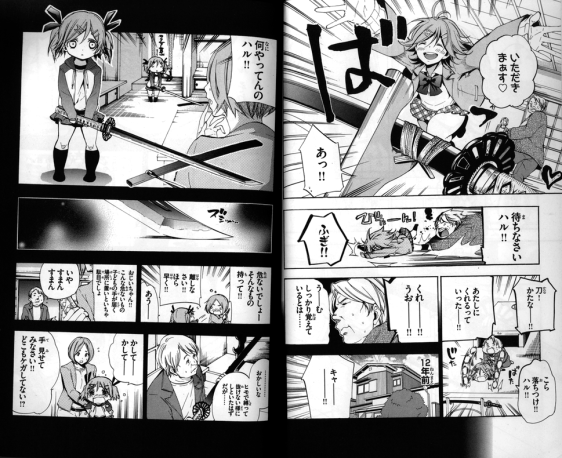 The main character of Haru Polish is Okamoto Haru, a high school girl who is so obsessed with swords that she borders on Fighter from 8-Bit Theater-like behavior. As a small child, she came across a mysterious blade at her grandparents’ place, and ever since that day she’s been looking to reunite with it. Being denied that opportunity even as she reaches high school, she decides instead to join her school’s Iaido Club to get her fix. Though Haru is completely untrained, the president (and only member) of the club sees great, perhaps even disturbing levels of potential in her. The title refers to the fact that the Japanese word for polish, migaku, can mean both polishing a blade and refining oneself as a person.

It would normally be simple enough to determine how a manga like this would go. You have the club expand, you have its members fight in practice or in tournaments, and you leave plenty of room for depicting cute girls swinging swords. It’s arguably even expected, given its creators’ histories: Totsuka Masahiro is probably best known for Bamboo Blade and Minamoto You [pronounced “Yuu”] is responsible for Asu no Yoichi. However, while much of this does indeed happen, there were clearly some problems along the way. This is best exemplified by the fact that the character actually only have one team match, and it’s in the final volume of the series, when the writing was likely already on the wall for Haru Polish.

Rather than being a continuous story, there is evidence of the series stopping and starting over and over again as it re-calibrates to find its audience, going from the everyday hi-jinks of a club, to something about occult curses within swords, to its last hurrah that includes both the aforementioned team match and then a time skip. It’s such a shame that it was unable to find success, because I think the series is legitimately entertaining. It has endearing characters, detailed and vibrant artwork, and manages to stay fun and fresh even as it is recomposed over and over again. If only one of them had hit home with its readership, then I think it could’ve been something great. 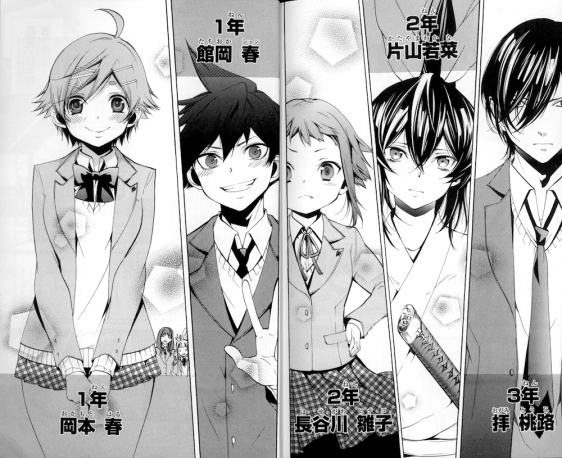 There are two comments by the creators of Haru Polish that speak towards its inability to grab a readership. The first comes from the artist Minamoto, who states at the end of Volume 1 that he was originally feeling glad that he could now do a series that was lighter on fanservice and didn’t really have panty shots, only for the editor to come in and tell him that Haru Polish needs more panty shots (and indeed this is where the manga goes). The second comes from the writer Totsuka, who, in the final volume states that he introduced a male character named Shun (written with the same kanji as Haru) in order to act as a second protagonist because readers just didn’t understand or connect to Haru. I was actually surprised by this because Haru was by far my favorite character while reading due to her cute appearance, her infectious love of swords, and, as seen in the first image above, her tendency towards yandere faces that don’t require her to want to stab a boyfriend (a welcome change to that character type in my opinion). It makes sense though, given the magazine that Haru Polish ran in.

The original home for Haru Polish was Shounen Champion, published by Akita Shoten. While Jump, Magazine, and Sunday are the big names of shounen manga, Shounen Champion essentially is the greatest bastion left of old-fashioned, rough ‘n tumble dudes fighting, series that are meant to appeal to boys above all else. While there are an increasing number of exceptions to the Champion style, such as Squid Girl, even its current most popular title, Yowamushi Pedal, clearly reflects its Champion origins even as it simultaneously embraces its large fujoshi audience. Both Shun and the use of panty shots were attempts to grab the Champion audience, but in the end Haru was possibly too strange a heroine for them. It’s to the credit of its creators that, even as the series began to wind down, it put is best foot forward, with amazing images such as this: 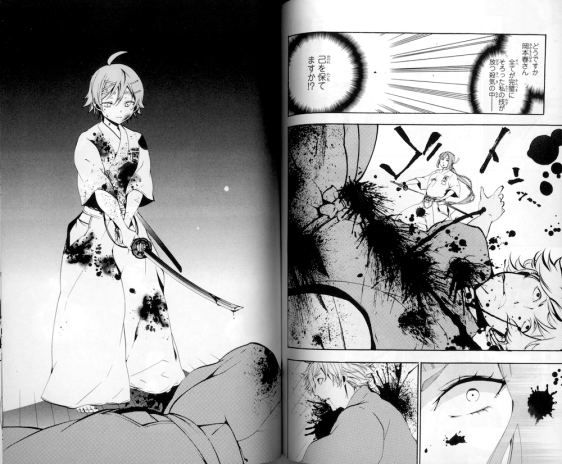 I want to end by talking about one of the most interesting stylistic flourishes of Haru Polish, which is its use of ink splotches to depict imaginary blood. The intent behind this is to represent an Iaido practitioner swinging a sword with real killing intent. Within the context of the manga, because the characters do not use real weapons (being a high school club and all), this becomes a way for the manga to show that, if they were really fighting, their opponents would probably be dead. In this first and only team match, depicted above, the manga reaches the absolute height of its visual style, as if the creators were saying, “This is what could have been.”

Indeed, I wish there were more.