The digital manga service Manga Box can be something of a game of Russian Roulette in terms of quality. Certain titles, such as Girl and Car on the Beat, I’ve found to be extremely entertaining, while others much less so. Lately, I’ve found one reason to keep coming back, and that’s B-Ball Goddess. 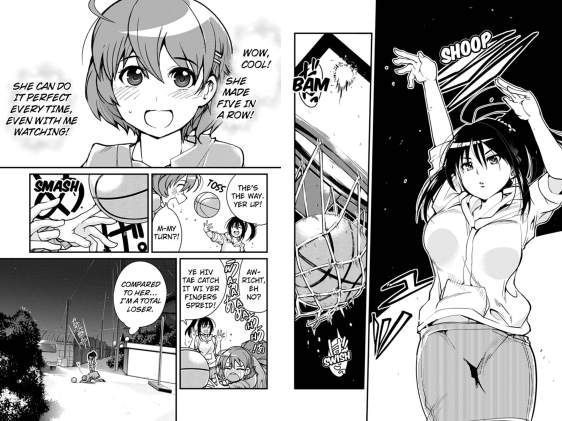 Known in Japanese as Basuke no Megami-sama, this manga follows a girl named Nimi Miyuki, who moves from Tokyo to Shimane Prefecture after a confession goes embarrassingly south. In Shimane, she meets the local basketball ace, Sakomizu Shou, who convinces Miyuki to join the women’s basketball team at their school. Though Miyuki is seemingly without talent, Shou is convinced that she has what it takes.

Manga about basketball is hardly new, and manga about girls playing sports even less so. However, B-Ball Goddess combines a really good understanding of how to portray cute girls with a strong sense of physicality and the excitement of a basketball game, all without resorting to especially gratuitous fanservice (most of the time) or shounen manga-esque displays of basketball super powers. For me, it’s quite telling that, in conversations with writer, comics critic, and long-time basketball fan David Brothers, he found Kuroko’s Basketball to be somewhat unbearable, but B-Ball Goddess to be solid and fun. I’m not sure if that means that all basketball fans would enjoy B-Ball Goddess, but I think that’s about as good an endorsement as it gets, short of an actual NBA player praising it. 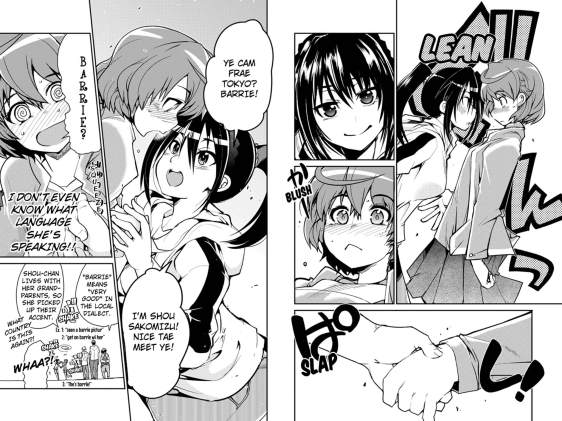 One of the more prominent aspects of the manga is the Umpaku dialect found in Shimane and its surrounding regions, of which the most common is Izumo-ben. While Miyuki and most other girls in the series speak using standard Japanese, older characters and Shou herself utilizes the dialect.  Of course, this being a manga that’s translated into English and all, a decision must be made as to whether the English should portray this difference or ignore it entirely. No choice is inherently correct, but I do have to wonder how the translator for B-Ball Goddess decided upon their solution.

As far as I can tell, the Umpaku dialect has been replaced by a thick Irish or possibly Scottish dialect, and while this works okay for the most part, at times Shou is almost impossible to understand. Unlike in the original Japanese where kanji can help readers understand what’s really being said, English has no such luxury in general. Thankfully, for particularly obtuse terms translation notes are usually provided, though it’s not Japanese to English but rather English to English.

You can read the first chapter of B-Ball Goddess online, and the Manga Box app is free on both Android and iOS.