At long last, after many years and 35 volumes of manga, I have finished the exhilarating, hilarious, ugly, and beautiful shogi manga known as 81 Diver. Its bizarre narrative and even stranger art work captivated me from the very beginning, and now that I have seen this series to its end (one of the three series I followed intently that have concluded recently), I want to write to confirm that 81 Diver not only ends strong but in many ways either matched or exceeded my expectations.

81 Diver is the story of Sugata Kontarou, a failed shogi [Japanese chess] player who has taken up gambling through shogi to make ends meet and to fulfill his love of the board game. One day, he decides to order a maid service to clean up his apartment, and discovers at his doorstep an absolutely voluptuous redhead as if out of a fantasy. However, this maid has another identity as Akihabara’s strongest shougi player and a gambler just like Sugata. Known as “Ukeshi,” what translates loosely to “master of defense,” Nakashizu Soyo (as we later learn her name) has her own mission in life: to avenge her brother and father who were both killed by shogi.

As the series progresses, the characters wind up not only challenging and befriending a variety of powerful shogi players and for some reason martial arts experts (actually it’s because the author Shibata also wrote Air Master), but end up in a tournament to save the world from the Kishoukai, the “Demonic Shogi Organization.” The amounts of ridiculous twists and turns this series goes through are almost too many to count. As crazy and as strangely epic as this sounds, however, what really makes 81 Diver special is that the art looks like this: 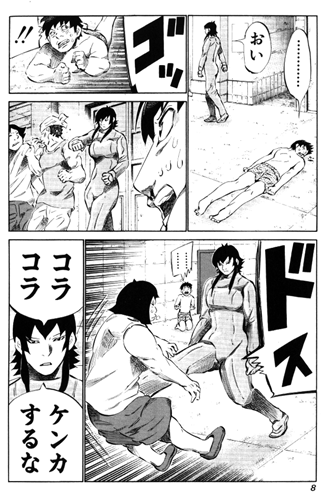 When discussing the character Kiryuuin Satsuki in Kill la Kill, I once wrote that she has so much presence and so much inner strength that it is the very first thing you notice even as she’s wearing the most ridiculous and revealing outfit possible. I find 81 Diver‘s portrayal of Soyo to be of a similar vein. Sometimes there will be pages of her character where half of it is occupied by a shogi board and the other half is taken up by her enormous chest. At the climax of the manga, her breasts become one of the central points of conflict. And yet, her raw shogi power level is what stand out most about her.

The difference is that, while Kill la Kill achieves this through incredibly well-rendered, stylized, and intense artwork, I ended up including 81 Diver as one of the many titles at my Otakon 2015 panel, “Great Ugly Manga.” On some level, this is clearly on purpose, but it’s also clear, especially given Shibata’s guest essay manga in Gundam: The Origin, that he’s making the best out of what he has, and what he has is a lot of spirit and not a lot of conventional drawing talent. 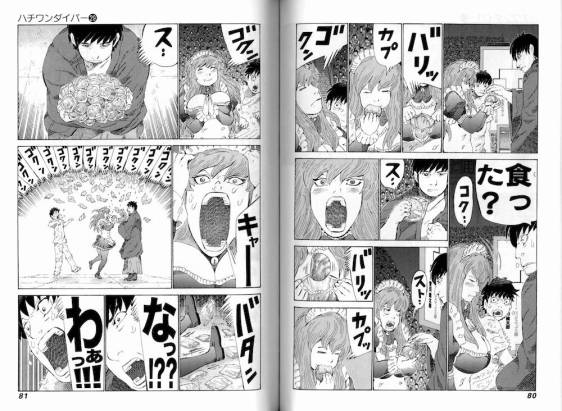 I would not call 81 Diver an intentionally feminist or progressive work, especially given all of the attention given to girls’ bodies, but it is notably diverse in its cast. There’s an admirable homosexual character who isn’t stereotypically flamboyant, who also dresses like a tokusatsu character and shoots rocket punches. There are also numerous romances between unlikely individuals, and what stands out most is the strange romance between Kontarou and Soyo that portrays them as equals above all else.

When you look at many shounen and seinen manga, there is often something of a lopsided relationship where love interests aren’t allowed to be as prominent in the particular subject focus of the manga (be it sports, fighting, or whatever). Not so with 81 Diver. Though Soyo is dressed in maid outfits throughout the series, and though she will sometimes playfully call him “master” as a callback to how they originally met, at the end of the day they are bonded by their mutual skill and passion for shogi. In fact, when the series begins Soyo is clearly Kontarou’s superior, and when they are able to play again much later in the series, it is one of the most satisfying duels I’ve ever seen in manga.

As mentioned by the characters, the characters fight as if they’re communicating their love through the game of shogi itself. When you see the two of them play, you genuinely don’t know who’s going to win because, even if you set aside the idea of skill in favor of narrative progress, both characters have convincing reasons why they need to win. Ultimately, I love the way they resolve all of this, but I won’t say more so that it remains a surprise for readers.

I could probably write a whole series of posts on 81 Diver, and in fact I’m quite tempted to do so. Suffice it to say, 81 Diver comes highly, highly recommended from me. If you can get past or even embrace the terrible (or perhaps terribly endeaering) artwork and style, it becomes one of the funniest, surprising, and involving manga you’ll ever read.

One thought on “Love, Shogi, and World Domination: 81 Diver”