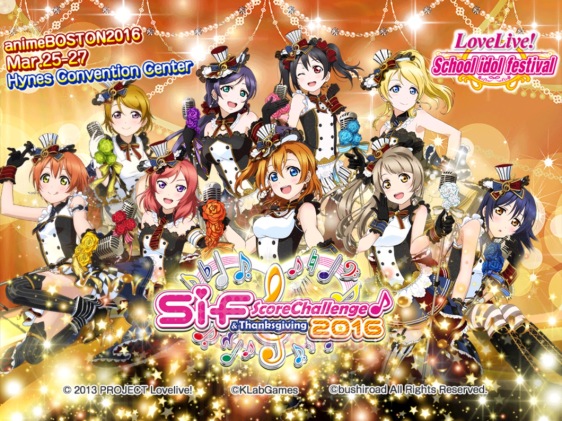 Coinciding with Anime Boston, this weekend, March 25-27, 2016, coincides with the first ever Love Live! School Idol Festival tournament, titled “School Idol Festival Score Challenge & Thanksgiving 2016. Given this occasion, a few questions come to mind. First, how sound is LLSIF as a competitive game (are we indeed “esports”)? Second, how many people will show up? Third, are people actually viewing this more as a tournament, or more of a gathering of like-minded fans?

Rhythm game tournaments have over the years been a staple of arcades and anime cons alike. Right beside the fighting games of Chinatown Fair were the sounds of stomping and eurobeat from Dance Dance Revolution, Beatmania, and other games of their genre. One big difference between LLSIF is that luck is a heavy component of the game, and this potentially hampers its competitive depth.

Not to say that luck automatically precludes or is counter to skill (because it doesn’t), but between being a free-to-play mobile game that encourages you to funnel money into what is essentially a gashapon machine (or a blind booster pack, to take a term from trading cards), and the fact that given cards have effects that trigger at random, a lot is left up to probability.

Compounding the issues of luck, actually, are things that involve no element of chance whatsoever. There is an upper limit to how skilled one can be in School Idol Festival, in the sense that perfect play is simply hitting all of the notes, well, perfectly, and this can be accomplished even with a randomized note distribution. If there are theoretically perfect teams (different for each tournament song, I’d imagine), then it actually all comes down to how often those card effects will trigger for individual players.

Does all of that matter, though? While I have not asked those who are personally attending Score Challenge & Thanksgiving 2016, I have to wonder how many are actually motivated by the desire to win. Perhaps in the backs of their mind they realize that the perfect game is at the same time all but obtainable yet shackled at the feet by that specter of probability. In that case, it becomes more about displaying one’s skills, to show that one has the fingers or thumbs to impress and astound.

In the world of competitive games, “waifu devotion,” that is to say an inclination towards beautiful female characters is very real. Whether the ladies are the best characters in the game or the bottom rung, players will stand by their girls. Love Live!, with its all-female cast of charmingly unique characters, is waifu central, and many who play LLSIF are empowered by this mentality. This does not even fall along heteronormative lines, either. Female Love Livers have their waifus just as male fans do, and the range of their affection goes anywhere from empathic to platonic to lecherous. On some level, I don’t think that hunger for victory is the sole motivating factor behind even LLSIF’s most competitive players.

Indeed, if I were going, I would not hesitate to use a team of nothing but my favorite character, Hanayo. Did you know that she’s good at origami?

That last question I asked, about whether this will be more of an actual tournament or more of a gathering in the eyes of attendees, is something of a trick question. Aside from a few exceptions, pretty much all game tournaments, big or small, esports or otherwise, inevitably carry with them some degree of a festival-like atmosphere. The larger the total attendance, the more likely this is to happen, because people know that they are in the company of comrades, at least on some level.

In other words, I hope all of you attending have the times of your lives.