I realized that I’ve been giving the wrong name for the main guy. It’s Hayato, not Shuuto, and I somehow missed that despite it being written clearly in the very beginning of Chapter 1. Sorry about that.

I’ve since gone back and changed the previous chapter review. I hope this hasn’t impacted your enjoyment of this series or my reviews!

In Chapter 1 we got to see the world from Hayato’s point of view, and Chapter 2 was a Nobuko’s-eye view. This time, it’s primarily from their other close friend that we’ve seen in previous chapters, Natsumi.

Chapter 3 mainly takes place in the past, when Hayato and Natsumi were classmates in elementary school. They’re putting on a play about a prince (Hayato) and multiple princesses, but Natsumi gets picked on by the other girls for being poor and not very “princess-like.” Hayato, being the naturally good guy, defends Natsumi, including being wiling to not participate in the play. Natsumi develops a crush on Hayato, and is inspired to start acting thanks to him, but learns the painful truth from day 1 that his heart belongs to Nobuko. 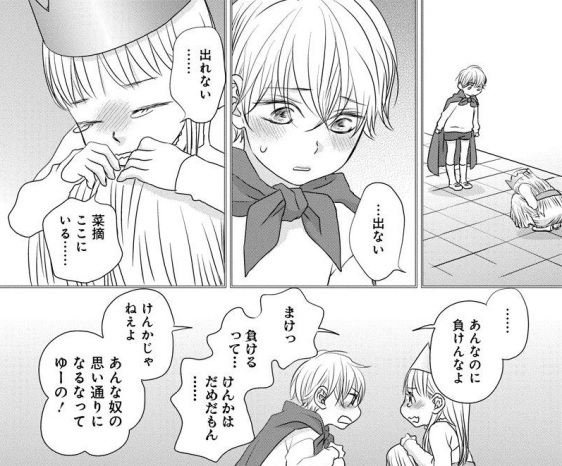 Back in the present of the main narrative, it’s revealed that this chapter takes place between Chapters 1 and 2, after Hayato first confessed to Nobuko. Natsumi quietly asks if Hayato’s feelings could possibly be love, given how young he was at the time. However, Natsumi senses her younger self telling her something important: Natsumi was only a kid when she first noticed Hayato, and she knows those emotions are genuine.

I wondered last month to what extent Kimi Nakare would begin to fill in its side characters, and the process has already begun. What I perhaps didn’t expect (though in hindsight maybe I should have) is that there would be a love triangle. I guess it’s maybe technically not a triangle depending on how you define it (Hayato only has eyes for Nobuko), though it’s also looking not to be as much about the exclusive world between Hayato and Nobuko as I first thought. I am a little apprehensive because I know how heavy and meandering love triangle manga can get, but I have faith in the creator Ohachimachi Hato’s ability to weave an interesting tale with endearing characters.

Who Will You Kiss? Me or That Girl?

Nevertheless, the chain of emotions is established, but one interesting wrinkle to this tried-and-true formula is that Natsumi is clearly the more attractive of the two girls. Whether she’s supposed to be relatively plain in the mold of the typical shoujo protagonist, or she’s supposed to be extremely beautiful isn’t entirely clear (were the girls who picked on her jealous or just snotty brats?), but she has all the features typically desired in a girl in manga. Natsumi is quiet, has a good heart, and just comes across as “better girlfriend” material. And yet, she’s the one on the backfoot, because Hayato is just enraptured with Nobuko.

It’s not unusual for the third girl in the love triangle to be at a disadvantage because of personality or because there’s some kind of charisma that the main girl possesses, but it’s also usually not to this extent. There might be some similarities to Kimi ni Todoke, but Natsumi is no Kurumizawa Ume, and Nobuko is two steps beyond the eccentricities of Kuronouma Sawako. Just the fact that Nobuko’s only appearance in this chapter is in the form of a comical rendering just pushes home the idea that Natsumi is competing with a force perhaps unlike any other in romance manga.

This is definitely not the Chapter 3 I was expecting. While I worry about love triangles a bit, I’m also looking forward to where the manga goes from here.