For this year’s New York Comic Con, I’m doing something a bit different with my coverage. Instead of doing a standard con report, with overviews and opinions on panels, artist alley, etc., I’m going to be writing a series of essays based on things I saw at NYCC 2016. Think of it like extended thought exercises and musings inspired by the con. 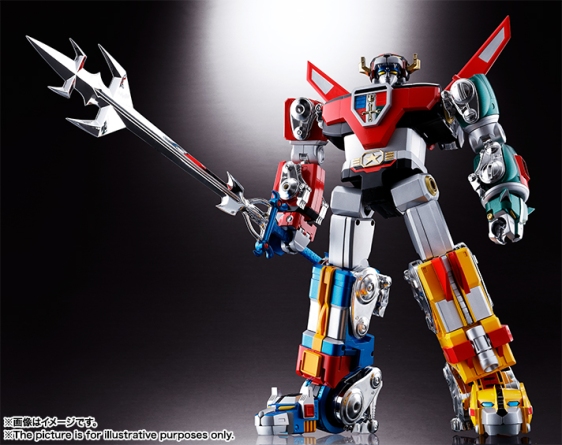 As someone who loves giant robots, one of the highlights of New York Comic Con 2016 had to be the dual displays of Soul of Chogokin Voltron and Megazord. Created as high-end poseable figures with plenty of metal, show-accurate proportions and transformations, and as much articulation as their designs can allow, when something joins the Soul of Chogokin line it is like a rite of passage. It’s the pinnacle of mecha toys, and any fans of either robot likely already has them on their radars. Seeing them together, however, made me think about their significance to both American fans and the people responsible for the Soul of Chogokin line. These figures represent not only the fulfillment of childhood dreams, but are indicative of the complex interactions between nostalgia and specific cultural contexts.

Although I personally do not view Voltron or Megazord with the kind of near-religious fervor that grips so many other fans (granted Voltron was the show that introduced me to giant robots), I couldn’t help but be impressed by their designs. They’re both large, clearly very hefty, and capture well the particular quirks of both robots, perhaps even to the point that it would be jarring. For example, Voltron can look a little too squat, until you realize that it actually reflects the original design well, and the main reason we see it as being perhaps slightly lankier in proportions is because the iconic images of Voltron tend to be upward perspective shots.

Above each of the displays was a painting of the robot below, with a little information card on the side to provide some extra insight on the artist who provided them, Nonaka Tsuyoshi. Reading these, what caught my attention was that not only was Nonaka responsible for the original Megazord design, but he was also the man responsible for starting the Soul of Chogokin line in the first place! In a way, the birth of the Soul of Chogokin Megazord can be viewed as Nonaka’s homecoming.

There was another detail that I found even more notable. When describing Nonaka’s founding of the Soul of Chogokin line, the card stated that the toys were born out of his desire to celebrate the giant robots of his own youth, such as Mazinger Z. They were what inspired him, and so he in turn has given them the star treatment. Extending this line of thought, one can view Voltron and the Megazord as essentially the “Mazinger Z’s of America.” Many countries are introduced to super robots differently, and in the case of the US these two in particular are deeply woven into the fabric of pop culture. Remember, the original Japanese version of Voltron, King of Beasts Golion, isn’t a particularly notable show. Zyuranger, the show that would become Mighty Morphin’ Power Rangers, is beloved among Super Sentai fans, but is considered one of many good iterations. In the United States, however, these robots are integral to introducing generations of kids to the wide world of mecha. Thus, the Soul of Chogokin line is doing what it was originally meant to, only in another cultural context.

Thinking further about the iconic aspect of Voltron and the Megazord, it’s fascinating just how lasting their presence is relative to the shows they came from. For example, because Voltron has that cool look and that place in American broadcast history, it can be remade again and again, most notably in the surprise hit Voltron: Legendary Defender. What’s even more striking about its presence, however, is that Vehicle Voltron is as absent from pop culture memory as Lion Voltron is enduring. In fact, notice how I’ve only said “Voltron” throughout this essay. I bet that, for many readers, they didn’t even notice that something was odd. There are a number of possible reasons why Lion Voltron is remembered whereas Vehicle Voltron largely is not: Lion Voltron came first, it aired on TV more often, and its colorful characters and overall design are more memorable (mouths for hands and feet!). Whatever the reason, what stands out to me is how fickle and unforgiving mass-nostalgia can be, even if there’s no real “blame” to go around.

Soul of Chogokin Voltron and Megazord are squarely aimed at the US market in a way that I’m not sure previous internationally beloved robots such as Grendizer (for much of Europe) and Voltes V (for the Philippines) previously were. In that respect, I predict this to be the start of a new relationship between Bandai and its potential consumers around the world. Given this potential, I’m rather curious as to what might come next. Perhaps we might someday see Soul of Chogokin representation for a robot that doesn’t even have its origins in Japan.