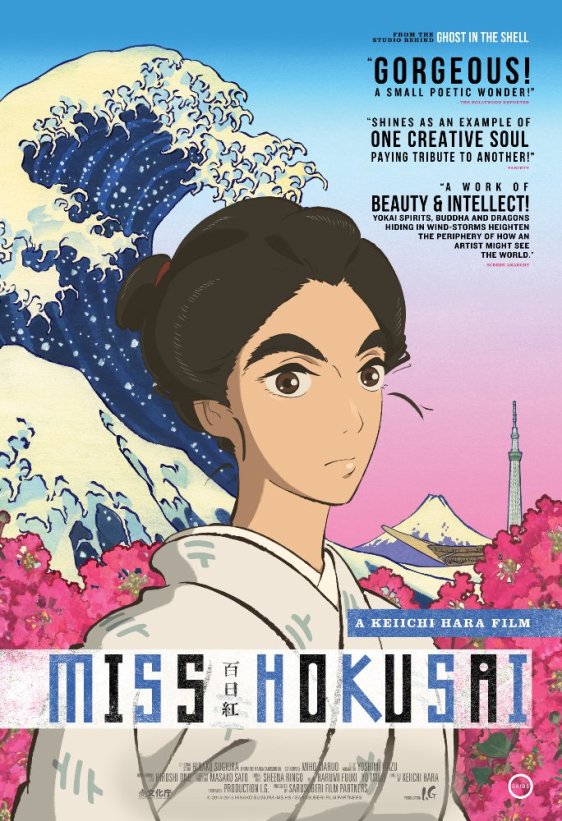 When it comes to the history of Japanese art, no name stands out more than Hokusai. Most famously known for works such as his amusing sketches known as Hokusai Manga, as well as The Great Wave Over Kanagawa, his prints and paintings are the definition of iconic. One lesser known fact, at least to folks such as myself, is that he had a daughter who was a renowned painter and printmaker in her own right. Her life is the central focus of the film Miss Hokusai (known in Japanese as Sarusuberi), a highly appealing movie directed by Hara Keiichi (Summer Days with Coo) whose meandering path from beginning to end makes it all the more engaging.

What stands out about the film above all else is the main character herself, Katsushika O-Ei. “Miss Hokusai” exudes a strong charisma that gives her story weight and carries the film forward despite the fact that she doesn’t have any sort of singular ambition or goal she’s trying to fulfill. Instead, the focus is broader, showing her personal challenges as an individual, and how she handles them from one day to the next. For example, she works as an assistant to her father, and her awareness of both his general disheveled nature and his brilliance makes it so that the sheen of celebrity that he possesses is simultaneously both dulled and refined. The most notable aspect of her design visually is her big, bushy eyebrows (inherited from her dad), which gives her a memorable appearance.

Though the film presents in some ways an idealized image of Edo (currently Tokyo), it takes great steps to reflect the realities of the times it’s portraying. None of the characters speak in the style of Japanese one would hear today in modern Tokyo, and instead everyone has an Edo accent. Though this is not explicitly stated in Miss Hokusai, one of the main reasons the “Edo dialect” became more widespread was that it was how the women in the brothels spoke. The commonality of prostitution, and the fact that it wasn’t considered an especially big deal, sets the kind of environment that O-Ei lives in, all without admonishing it.

Related to this, one of the more interesting aspects of the film is the full acknowledgement that ukiyo-e and other forms of printing were not especially glamorous worlds. Its makers toed the line between artists and artisans, and the fact that pornographic and erotic art was a staple of the market is both well-established and incorporated into O-Ei’s own narrative. Her inexperience with love has an effect on both her business (she’s known for her unrivaled talent in drawing beautiful women but isn’t as good at depicting sex), as well as her personal life (she’s constantly flustered when speaking to the man she’s smitten with).

There’s also a spiritual/occult element to the film that I don’t want to spoil too much, but it reflects a kind of deep emotional and spiritual connection to art as expressed by both O-Ei and her father. It really makes me think about the idea that, even since the time of prehistoric cavemen, the ability to recreate worlds both familiar and alien assumed a kind of power bordering on the divine. The way Miss Hokusai depicts the act of creating art portrays it as a magical experience that visits different creators in different ways.

Another visual quality that gave me much to chew on mentally was the act of seeing these anime characters drawing in this older style. Though ukiyo-e and such are sometimes argued to be the precursors to manga and anime as we know it today, the connection is actually rather tenuous. However, seeing the same characters depicted in both anime form and in that woodblock print style connects these two different aesthetics together. As a result, I began to consider the idea that, even if they aren’t related all that much historically, there is a kind of spiritual succession at work between “Hokusai manga” and “manga,” so to speak.

Overall, I highly recommend Miss Hokusai to anyone who enjoys a kind of circuitous storytelling where the important pieces slowly come into view, and to anyone who wants to see an inspirational and uplifting woman who is certainly not without her own flaws. It’s visually rich, full of characters who need only moments to draw you into their world, and a clever portrayal of what it’s like to be a creator.

5 thoughts on “The Strength and Creativity of a Woman: Miss Hokusai Film Review”