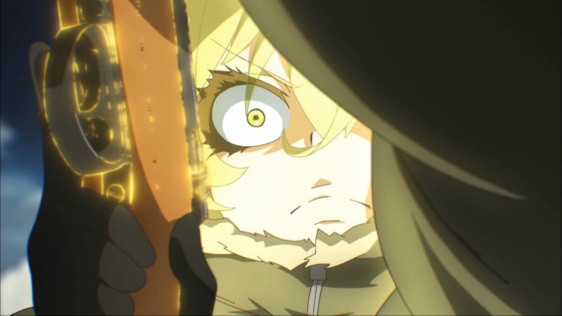 It’s very tempting to categorize Saga of Tanya the Evil according to its appearances. What else would you do about a series where a Japanese man is reincarnated as a blonde magical little girl in an alternate universe version of Nazi Germany? Is it fetishizing the Third Reich? Is it making an argument for authoritarianism and militarism through the lens of contemporary anime tropes? Questions abound, and yet I find that this anime is very difficult to gauge its moral direction, if there is any at all.

Tanya is a little girl who in another life was a ruthless salaryman dedicated to staying the reliable course that is assumed of his profession. So devoted a company man is he that he fires one of his employees for a minor infraction. Believing in the superiority of a detached, logical mindset, he fails to anticipate that his ex-employee would be so despondent as to push the salaryman in front of a moving train. At that moment, the man receives a message from God but refuses to believe in the existence of a higher power, which prompts God to reincarnate him as Tanya.

As Tanya, she has kept her memories of her previous incarnation, and at only 10 years old joins the imperial military due to her extremely high magical aptitude. Similar to her previous life, she sees the military as the steady course to a comfortable life, but a variety of contrivances both divine and coincidental cause her to consistently put her life (and her beliefs) in peril.

Given this back story, it’s possible to argue conflicting points. For example, the refusal by Tanya to let God control her could be seen as a defiance of fate and religion, but the fact that Tanya is constantly denying the existence of a supreme being despite everything that happens might render it a point in favor of religion. For me, I find that the main point of conflict and confusion when trying to analyze this series is actually the question of whether it’s supporting Tanya’s mindset or criticizing it (or maybe both!).

Tanya’s desire for the most stable track in life, and the calculated way she goes about it, has the appeal of an older science fiction protagonist. Often, she’ll say one thing and think the other, and it’s usually in service of appearing like an upstanding member of society in order to further her own desires. However, the subsequent derails that keep Tanya from that comfortable life might be a criticism of the Bubble Economy mindset that has been the cause of much anguish ever since the Japanese recession began. Where once the path to success was all but assured for many Japanese salarymen, that foundation crumbled underneath them, leading to (among other things) a crisis of masculinity.

Perhaps this is the reason why Tanya is a girl in the first place. While it’s normally assumed that older male anime fans gravitate towards young female characters due to a desire to be with them, there’s also to some extent a desire to be them. The assumed idyllic life of cute girls, and the innocent mindset that is supposed to come with that, holds what I believe to be a particularly strong appeal to those whose lives are slowly ground down by the engine of corporate society. That being said, the fact that Tanya maintains her previous life’s Japanese salaryman/mildly sociopathic mindset seems more confrontational than those kinds of series usually are.

In this respect, the series that I think holds the greatest connection to Saga of Tanya the Evil, it’s actually Strike Witches. In terms of setting, the two are quite similar: alternate versions of World War II Earth where magic and technology come together to give young girls flight and military might. Strike Witches is much more in the vein of the types of series I described in the previous paragraph, because while the story is about war, it’s as if the world is an extension of the characters’ identities as cute girls. With Saga of Tanya the Evil, this concept is taken to its extreme. Tanya is akin to a Strike Witch if that world actually had the image of military machinery beyond lighter aesthetic elements.

4 thoughts on “Coast to Coast: Saga of Tanya the Evil”