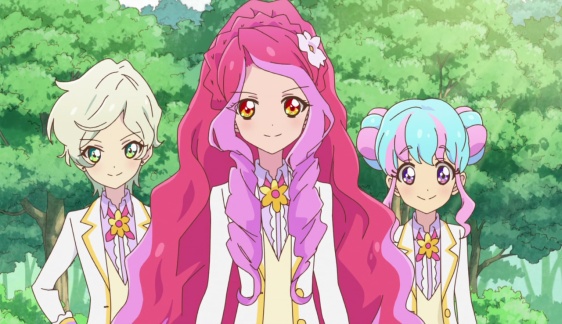 The second season of Aikatsu Stars! begins from an interesting place. After the end of the first season, heroine Nijino Yume becomes a member of S4, the top idol group at her school. In Pokemon terms, this would be equivalent to having Ash start a series as a member of the Elite Four. She’s not just improved, she’s established as one of the best. Given this setup, I find it interesting how Aikatsu Stars! season 2 brings up the difference between “great” and “perfect.”

Confronting heroine Nijino Yume is a new rival idol academy called Venus Ark, which travels around the world on a cruise ship looking to poach idols from other schools. At the head of Venus Ark is Elza Forte, who, much like deceased pro wrestler Curt Hennig is known by one word: Perfect. There’s even a tangible symbol of perfection in the form of wings that appear only when a perfect performance is given, and at the start of the series “Perfect Elza” is the only one who has them.

But what does it mean to be perfect? Does it mean to never lose? Does it mean performing in such a way that it would be the equivalent of a perfect score in the Aikatsu Stars! arcade game? As the primary rival of the season, Elza is there as a goal to aspire towards and overcome, much like Shiratori Hime in season 1. Whether Yume will beat Elza or not is up in the air, but my hope is that Yume challenges the concept of “perfection” as presented by Elza. Perhaps Yume could show that the best possible performance is not necessarily a perfect one, but the one that connects to the audience best even if mistakes are made.

I understand that Aikatsu Stars! is based on a card-based arcade game that has a more concrete idea of what it means to play a “perfect game,” as well as cards that just have better synergy. However, the first Aikatsu! series (back when Ichigo was the main character) went above and beyond those restraints, and season 1 of Aikatsu Stars! really emphasized a balanced mix of product placement and story. I don’t need for the development I’ve described above to happen, and it’s not even the only way for the series to be strong, but I’d like to have a series where the kids watching don’t feel the need to strive for “perfection,” only their best.

2 thoughts on “Aikatsu Stars Season 2 and Notions of Perfection”