What is Return to Genshiken?

Genshiken is an influential manga about otaku, as well as my favorite manga ever and the inspiration for this blog, but it’s been many years since I’ve read the series. I intend to re-read Genshiken with the benefit of hindsight and see how much, if at all, my thoughts on the manga have changed.

Note that, unlike my chapter reviews for the second series, Genshiken Nidaime, I’m going to be looking at this volume by volume. I’ll be using the English release of Genshiken as well, for my own convenience. Also, I will be spoiling the entirety of Genshiken, both the first series and the sequel, so be warned. 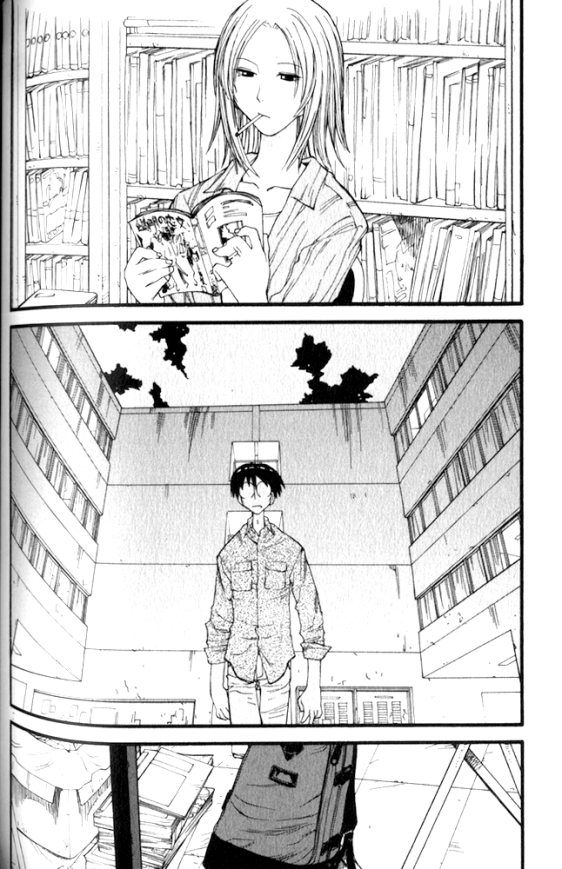 Love begins to claw its way into the awkward otaku world of Genshiken. Tanaka shows Ohno the wondrous world of Gundam models. Madarame finds himself alone with Kasukabe Saki in the clubroom, and the situation is too much for his poor nerd heart to handle. Keiko tries to put the moves on Kohsaka by trying to understand the otaku mind. Sasahara gets his first computer and his first private dating sim “experience”…

But trouble is on the horizon, as Saki accidentally sets a pile of old Genshiken garbage on fire. The volume ends with a lot of burnt paper and a frantic Saki.

The “Madarame alone with Kasukabe” scene is, in my opinion, the most significant part of Volume 3. Madarame trying to use his dating sim knowledge IRL is of course quite humorous, but in hindsight, the repercussions of this moment are tremendous. It is essentially when Genshiken as a series began to transition its characters out of the cocoon of their otaku worlds. As we know from later volumes, they never stop being otaku, but this is where the chinks in Madarame’s armor begin to show.

When Madarame finally confesses to Saki in Nidaime, Madarame considers this the point when he first fell in love with her. Looking at the chapter, the symbolism is right there: he forgets his bag full of doujinshi, an item which he’d have treasured above all else. In that moment, 3D overwhelms 2D, and not even Madarame himself fully realizes it until much later in the series.

This first attraction on the part of Madarame is not based purely on the physical aspects of Saki. It wouldn’t make him nearly as nervous otherwise. In the same volume, when Ohno tries to get her to wear a cat ear-adorned frilly maid headband, the guys in the club are quick to fantasize about a cat-maid Saki slowly becoming more subservient. In the previous volume, more than one of the guys intends to use Saki as masturbation material. And when Ohno falls in the water at the beach and ends up showing her polka dot swimsuit, the guys are clearly aroused. With Madarame and Saki, it hits him deeper than where his desires typically lie.

The Impenetrable World of Otaku

Aside from the ratio of boys to girls, one of the major differences between the first Genshiken and Nidaime that really stands out to me is just how much the former tries to introduce the world of the otaku. There’s a chapter about building Gundam models, there’s another about buying a computer, and the use of “normal” folks like Keiko and Saki positions the manga as easing laymen in. At the same time, there’s something about the portrayal of otaku that renders their conversations as opaque, and it’s not just the knowledge itself that creates this sensation. As someone familiar with most of what the characters are talking about, the way they present information just sounds very exclusive, as if it were a kind of defense mechanism. When the girls of Nidaime chat about their favorite pairings, the space they create through conversation somehow feels more accessible.

While this volume features what is arguably the most important moment for Madarame in Genshiken (especially the first series), it’s also of great significance to Saki. Her panicking over accidentally starting that fire is the first time Saki comes across as vulnerable. While she’s usually able to handle everything, this makes it clearer that she’s invincible when it comes to social situations but not physical dangers. While her full transformation into a member of Genshiken (not just in letter but in spirit too) comes in Volume 4, this is the pivot, the point of evolution.

Keiko also begins the transition here, as she slowly begins to understand the otaku mind. This comes out full force in Nidaime when she tries to seduce Madarame, but by then it’s tempered by a slightly more forethought. This is only the beginning of the beginning, though. Her actual key moment, in my opinion, comes when she stops calling Sasahara “monkey.”

Ohno is still extremely shy at this point, and it reminds me that she almost becomes a completely different character as the series progreses. The change is to some extent gradual, but if I recally correctly, the actual moment that triggers her more drastic metamorphosis into open, motherly figure is when Ogiue is introduced as an antagonistic force of sorts. Naturally, I’m looking forward to that next volume! 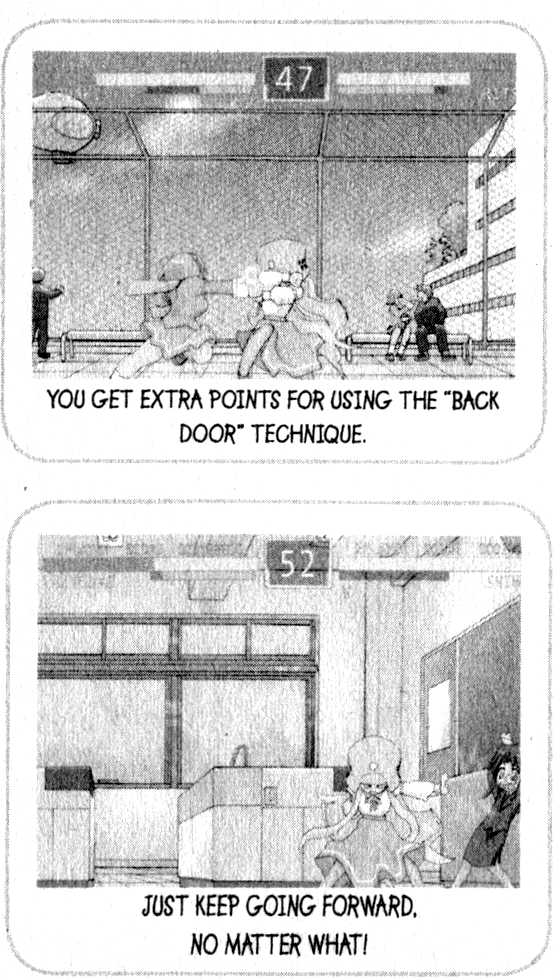 This volume’s Mebaetame (the Genshiken club doujinshi magazine) is a review of the various characters in a fictitious fighting game based on everyone’s favorite series, Kujibiki Unbalance. The portrayal of this game is a real throwback to the days when doujin fighters were all the rage. Nowadays, the qualities that defined doujin fighting games—long combos, air dashes, anime aesthetic, etc.—have all become features of official, professionally produced games. BlazBlue, Arcana Heart, Dengeki Bunko Fighting Climax, Aqua Pazza, and of course Melty Blood (which began as a doujin game before transitioning into something found in arcades and played in tournaments) are all of this lineage.

The Genshiken members talk about how the game is more faithful to the characters than trying to be a balanced (or good) fighting game. Personally speaking, it’s what one wants out of a doujin game: a love of the series takes priority over trying to be, to use a more recent term, “eSports now.” It reminds me of a doujin fighter I really enjoyed back in the day called Magical Chaser. It was themed around magical girls!

The English translations for these Mebaetame entries are rather awkward, and suggest someone who is unfamiliar with fighting games in general. I say this from the perspective of having many more online resources, as well as a long history interacting with fighting game enthusiasts, so I understand that it’s simply not easy trying to adapt that lingo. If you know fighting games at all, you’d probably have a fair idea as to what the characters are trying to say.

Two little details in this volume really date the series. The first is when the club is giving Sasahara advice on buying a new computer. The second is when Madarame talks about watching the episode of Kujibiki Unbalance he recorded.

As the other members guide Sasahaa, they talk about how 200gb is needlessly large for a hard drive—a sentiment that predictably would garner laughs today. Madarame also talks about how the US is obsessed with big hard drives, and to my American perspective I don’t quite understand what the big deal is. It’s not excessive if you use up all the space!

Later, when Madarame suggests they watch Kujibiki Unbalance again, he pulls out a VHS tape. I always wondered at what point I would see video cassettes as artifacts. I guess now’s the time…