Along with the release of PGRv4 I am also announcing the future of my competitive journey in Smash 4. I've attached 3 more pictures to this tweet which contain my letter to the Smash community.

I did my very best for as long as I could.

Thank you so much for all your support. pic.twitter.com/JVNBh3rqRW

From the looks of things, an age of competitive Smash 4 has come to an end. With a new Smashboards Smash 4 Tier List, seen below, the reveal of the Top 50 PGR-ranked players, and the announced retirement of ZeRo—far and away the greatest Smash 4 player to date—the likely dawn of a new age is filled with questions. The ones most on my mind are “Can anyone ascend to ZeRO’s empty throne?” and “How will Diddy Kong be perceived by players in the years to come?”

ZeRo hasn’t just been the best Smash 4 player; it’s just so indisputable that no one who knows anything will disagree. In the early days of the game, he went on a tear that looks nigh-impossible to match, winning 53 tournaments in a row before finally falling to one of the other Smash 4 elites in Nairo. Since then, ZeRo has looked increasingly mortal as the other players have continually improved, but his ability to claw and scratch his way back to the top is rare. He even won the very first Nintendo invitational before the game was released!

ZeRo has an enormous influence on the meta. In fact, we saw a mini-version of this planned retirement a couple of years ago. In 2016, ZeRo ran into a medical issue that forced him into a small hiatus. During that period, many challengers rose to the occasion, such as the Japanese player Abadango. It was during this period that Abadango won his first major tournament, Shine 2016, off the back of his surprising and enchanting Mewtwo play. But then ZeRo returned, and he and his trusty Diddy Kong became a thorn in Abadango’s side. This elite Japanese player has never been able to take a set off of ZeRo, and he’s not alone. In fact, only 34 players have ever been able to accomplish that feat. Now, imagine how much this affects tournament brackets and placings.

ZeRo is a phenomenon. To take his place means not just being #1, it means holding onto that placement with an iron grip. And in a game with plenty of viable characters and a huge pool of skilled players, we might just be entering the Warring States period of Smash 4. I think it’s possible for a new king to emerge, but it certainly won’t be easy. 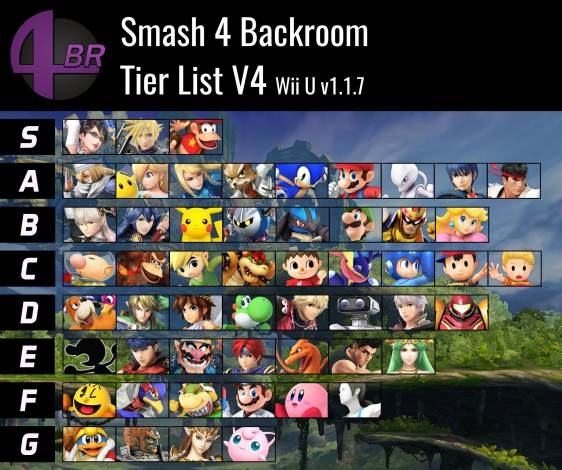 The categories might seem excessive, but as the explanatory post mentions, the different letter rankings can also be broken down as: S-A = Top Tier, B = High Tier, C = Upper Tier, D-E = Mid Tier F-G= Low Tier. If we define mid tier as characters that can, on occasion, make it fairly far (top 16 or so) at major events, then that’s a whopping 44 characters (out of 54 listed) that can do damage at tournaments. A Japanese Link player named T got 3rd at one of the biggest tournaments of the year in 2GG Civil War. Mii Fighters were not ranked due to lack of input from judges (which is a shame, but I digress).

It’s notable to me how just much tier lists in general, as well as audience perception, can be affected by top player results, as opposed to being judging the characters by their abilities alone. This is especially the case in the Smash communities, where top player reverence can border on worship. According to this tier list, Diddy Kong is the third best character in the game. Obviously, it’s not just about results, as that would make every tier list place Diddy Kong as #1 due to ZeRo. At the same time, there’s no way ZeRo isn’t the biggest argument in favor of Diddy being a top-3 character. After all, it’s happened before with other characters. When Kameme got 2nd at EVO, Mega Man was instant high tier. Ranai is by far the greatest Villager in Smash 4, but him attending fewer tournaments and doing somewhat worse drops Ranai from high to upper tier.

The next best-ranked Diddy Kong player is Panda Global’s MVD, a very strong competitor in his own right…but nowhere near the caliber of ZeRo. Over the next six months, I see people still remembering what Diddy Kong is capable of, but memories will fade. The world of eSports often has an incredibly short memory, with even one year being perceived by fans as a lifetime and a half, and I predict that Diddy Kong’s position will slowly recede as people only read of ZeRo’s accomplishments instead of experiencing them. As the meta shifts, fans might even say, “Sure, ZeRo did all that back when people didn’t know how to play the game as well, but now players know how to deal with Diddy.” It happens to virtually every other top tier in Smash 4, and it’ll happen here.

Of course, this is all provided ZeRo has actually retired (until the next Smash game). The pull of competition can be irresistible.