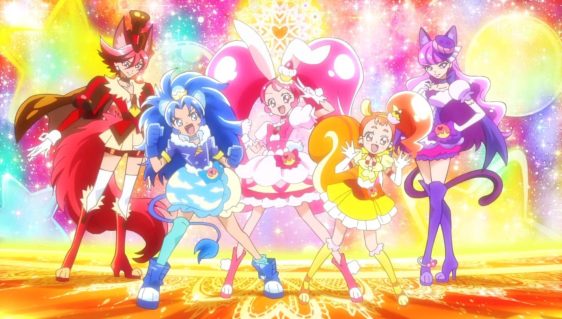 According to anime, girls and sweets go hand-in-hand. That’s why it’s all the more surprising that the Precure franchise took this long to create a series specifically dedicated to a pastry and confectionery theme. But Kira Kira Precure a la Mode isn’t merely a baking-themed magical girl show—it’s also quite possibly the Precure most dedicated to its central motif.

Kira Kira Precure a la Mode follows Usami Ichika, a middle school girl who enjoys baking. Learning of a nefarious force that creates havoc by stealing the very deliciousness of desserts—their kira kiraru (sparkles)—Ichika’s resistance is rewarded with the ability to become one of the warriors of legend known as Precure. As Cure Whip, she is joined by other friends and Cure allies to save the sweets, and by extension the world.

Aesthetic themes found in Precure are developed to varying degrees from one show to the next. While Go! Princess Precure directly asks what it means to be a princess and makes this a major narrative focus, Yes! Pretty Cure 5 is a bizarrely eclectic mix. There are butterflies? And dreams? And they fight an otherworldly corporation? But Precure a la Mode goes all-in. The heroes are all based on desserts. Their attacks include chocolate swords and whipped cream. The villains are trying to corrupt pastries and snacks. There’s even a recipe of the week most episodes, and the kids at home can learn how to make all of them! By the end, the show posits the notion that the love and kindness that comes with wanting to bake tasty treats for others can act as an antidote for malice and apathy. A generous claim, perhaps, yet the surest sign that this anime is wholly dedicated to its pro-baking message. It can be a bit ridiculous at times, but I prefer this over not developing the theme enough.

The core cast of Cures is pleasantly varied without falling too hard into generic five-man team syndrome, but their differences are not limited to just their standard color-coded contrasts. While all of them are involved in baking, each of them comes to it in unique ways resulting from what drives each of them. Ichika wants to make people happy through baking. Arisugawa Himari (Cure Custard) is a student of the science of baking, and wants others to appreciate the chemical magic that goes into cakes and cookies. Tategami Aoi (Cure Gelato) is more focused on her dream of being a rock star, but sees baking as a similar space for her passion. Kotozume Yukari (Cure Macaron) excels in nearly everything she does, but her inability to make perfect macarons becomes her opportunity to challenge herself. Kenjou Akira (Cure Chocolat) is the handsome and caring type, who bakes as an extension of her personality, as well as a way to treat her sickly little sister to something delicious. Later additions to the cast, especially a darkly snarky villain named Vibry (or Bibury, if you prefer) further add to the cornucopia of characters that highlight the series.

The Cures complement each other well overall, but special attention should be paid to Yukari and Akira. First, their personalities are rather rare in Precure. Yukari’s wry cleverness makes her almost an anti-trope character, frequently figuring out tricks and traps that the typical magical girl heroine would fall for in any other series. Akira is pretty much a Takarazuka Revue star transplanted into the world of Sunday morning children’s cartoons. Second, both are in high school as opposed to middle school, which is the typical age range of Precure girls. Third, though never stated 100% outright, it’s clear that there’s some shared romantic feelings between the two, with episodes dedicated to their trying to understand each other. While Precure is known for its significant yuri fanbase, these two bring it up a notch by combining multiple franchise-defying aspects together.

Overall, Kira Kira Precure a la Mode is a strong and solid entry into the Precure canon. It doesn’t quite hit the extraordinary highs of some of the franchise’s absolute best, but it’s definitely enjoyable from week to week, carries nice messages about how everyone’s unique, and even pushed that yuri envelope judge a smidge further than expected. It’s capable of appealing to the absolute newcomers as well as those with long-time experience, almost like a perfect chocolate chip cookie—simple, yet profoundly effective.

One thought on “Join the Bakery: Kira Kira Precure a la Mode”