I find that my favorite manga tend to finish in groups, and now following Teasobi is the news that the rap battle-themed series Change! is done. This was clearly not the intended way to go out, as it basically leaves off with an “our fight goes on!”-style non-ending. Despite that disappointment, I think it’s a really worthwhile manga that does its subject justice.

Change! revolves around Kozono Shiori, a meek girl at an elite high school who also has a love of the art of the Japanese language. She discovers that a classmate of hers, Miki, has been sneaking out to a club (how scandalous!), only to find that it’s a hip hop club where rap battles are the main event. While she initially writes it off, Shiori (now MC Shiorin) realizes that rap resonates with her deep fondness for Japanese poetry, and enters a new world. 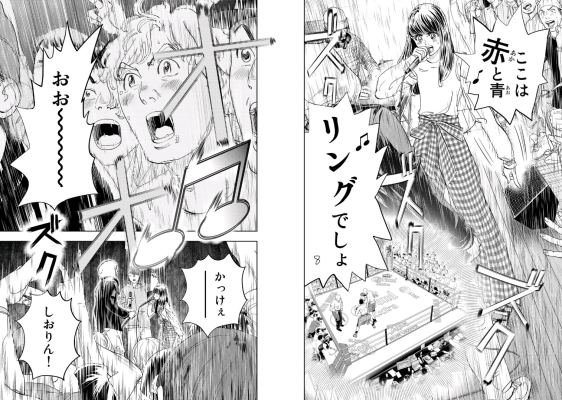 One of the main themes of Change! is that while Japanese rap could be seen as just an importing of American culture, it is just as much a part of Japanese (and international) culture as classical poetry. There are elements of the Japanese language, such as the combination of onyomi and kunyomi ways of pronouncing kanji, that make rapping in Japanese a unique experience. Shiori also draws comparison between rap battles and an old Japanese type of poetry competition called uta-awase. While this can come across as an attempt to justify rap’s existence, Shiori’s role in the story emphasizes the idea that the lyricism of rap can be enjoyed by those with an open mind and an appreciation for good wordplay. In this respect, she’s somewhat similar to Tupac, who could be inspired by things like Shakespeare and the music of Kate Bush.

The manga puts more emphasis on the artistry of rap and hip hop than how it grew from specific cultural circumstances, and there’s relatively little notion of its origins in African-American neighborhoods or its ability to give a voice to those who might not have one otherwise. Despite that, there’s a clear and genuine love for rap that permeates the series, and I can understand why a series that’s probably introducing a lot of people to the world of hip hop in the first place might not delve into deeper topics—especially because it ended before its time.

Speaking of, another sign that the manga was in trouble was that the digital versions of Change! started to get a new title: Waka no Ojou-sama Rap Hajimemashita, or A Japanese Poetry Princess Gets into Rap. Titles usually only get this when it seems like not enough people are even giving it a chance. See Edge of Tomorrow (aka Live, Die, Repeat) and Gundam Sousei (aka The Men Who Created Gundam) for examples.

There’s an episode preview in the first Genshiken anime where one of the characters talks about how all the best series get canceled early. Sometimes, I really believe it—because while manga can be an avenue for very unique and off-kilter comics, many ambitious series never get the chance to keep flourishing. Chances are slim, but I hope Change! can come back in some form (it would make for a great anime!). I wish the best of luck to Soda Masahito, Tomiyama Hiromiya, and lyrics supervisor Shinpeita on their future projects, and thank them for a fine piece of art.

3 thoughts on “Our Rap Battle Goes On: “Change!” Final Review”