Kemono Friends has taken the anime fandom in Japan by storm. With chart-topping sales in blu-rays, CDs, and more, Kemono Friends is an unlikely success story. How can such a simple-looking 3DCG cartoon about animal people win over the hearts of so many? The answer is by being just off-kilter enough to surprise, and then endearing enough to make a lasting impression.

Kemono Friends takes place in a nature park called Japari Park. The main characters, Serval (the serval cat) and Kaban (the human; kaban means “bag” in Japanese) journey to find out what kind of animal Kaban is. Along the way, they meet other half-beasts, collectively called “Friends,” learning about other species as well. 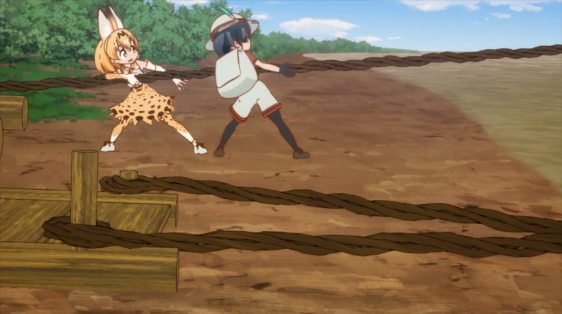 The initial hook of the series is how Kaban (and in fact everyone they meet) is unable to identify what Kaban herself is. Given the dilapidated state of Japari Park, it hints early on that the world of Kemono Friends is more than it seems. Is it a post-apocalypse? Is it something less sinister? The fact that the show maintains its laid-back feeling despite all of that gives the show an unusual charm that’s difficult to find elsewhere. Moreover, in every episode Kaban-chan inadvertently does something that comes easily to humans but is difficult or incomprehensible to the Friends, e.g. handling tools, analyzing situations, etc., which makes for a kind of intriguingly self-reflective position.

I find that a part of Kemono Friends‘ success is that it carries the DNA lineage of gdgd Fairies, a show that mixes cheap animation, unpredictable humor, and an improv section that lets its voice actresses go wild. The series Tesagure! Bukatsumono is of this vein, and its animation director, TATSUKI, is the director behind Kemono Friends. Although Kemono Friends has significantly less improvisational elements than gdgd Fairies or Tesagure! Bukatsumono, the use of simple CG to create a mellow yet mildly uncomfortable world remains. In fact, if there’s any other show that I think even comes close to Kemono Friends in terms of setting and feel, it’s Straight Title Robot Anime, another gdgd Fairies descendant that’s about robots trying to re-discover the concept of humor in a world where humans are extinct. In a sense, Kemono Friends is an “evolution” of this strand of anime, adapted to fit wider consumption than the niche approaches of its predecessors.

It would be a mistake to wholly attribute the popularity of Kemono Friends to those bits and pieces of DNA, however. Another reason the series works is because it’s actually an incredibly effective environmental awareness cartoon, especially for otaku viewers. 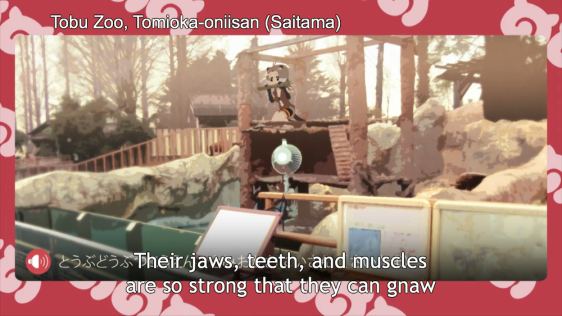 I think the default image of environmental cartoons are fairly overt (and arguably preachy) works: Captain Planet, Nausicaä of the Valley of the Wind, Fern Gully. etc. Kemono Friends, in contrast, takes a less direct approach. By merely introducing “Friend” versions of a variety of animals both popular and obscure, giving them personality traits tied to their actual animal behaviors, and contrasting them with Serval and Kaban, they all become memorable characters at the same time they help commit to memory the qualities of those animals. Perhaps nothing emphasizes this more than the eyecatches, which feature actual zookeepers and other animal experts describing the actual animals in great detail. The experts’ words are accompanied by an onscreen depiction of the Friends version of that animal, and the result is something along the lines of how Hetalia or Kantai Collection fandom involves learning more about actual history. In other words, Serval isn’t just a “catgirl,” she’s truly the embodiment of the serval cat, and just might make you want to help out all serval cats.

Kemono Friends isn’t impressive in terms of animation, but it has an odd charisma that works. While the show won’t win over everyone, I believe it takes only two episodes to really determine whether or not someone will enjoy this series. Those who watch it will be rewarded by a show that deftly balances a lot of different plates.

Crested Ibis: The Voice of an Angel Mixed with a Banshee

As for my favorite Friends, they’d have to be the shrill yet friendly Crested Ibis and the detail-oriented and the neurotic Beaver. Fight me.