Kiss Him, Not Me (aka Watashi ga Motete Dousunda in Japanese), a manga about an overweight fujoshi who suddenly finds herself with a harem of handsome classmates after losing weight, recently concluded in Japan. For those who might have been alarmed by the seeming shallowness of the initial premise, I believe this series to be worth a second look. Instead of a series centered on fat-shaming and mocking female anime fans, Kiss Him, Not Me is thoughtful, intelligent, and emphasizes the importance of self-image, all while remaining delightfully humorous.

I can definitely see why readers might have been worried at first, because I was as well. It’s true that most of protagonist Serinuma Kae’s suitors initially are drawn to her due to her dramatic “makeover”—the result of her favorite character’s death causing her to not eat. The apparent shallowness and lack of concern over how the series might interact with perception of eating disorders made me wary, but as the series went on, I found that it addressed my criticisms almost without fail. 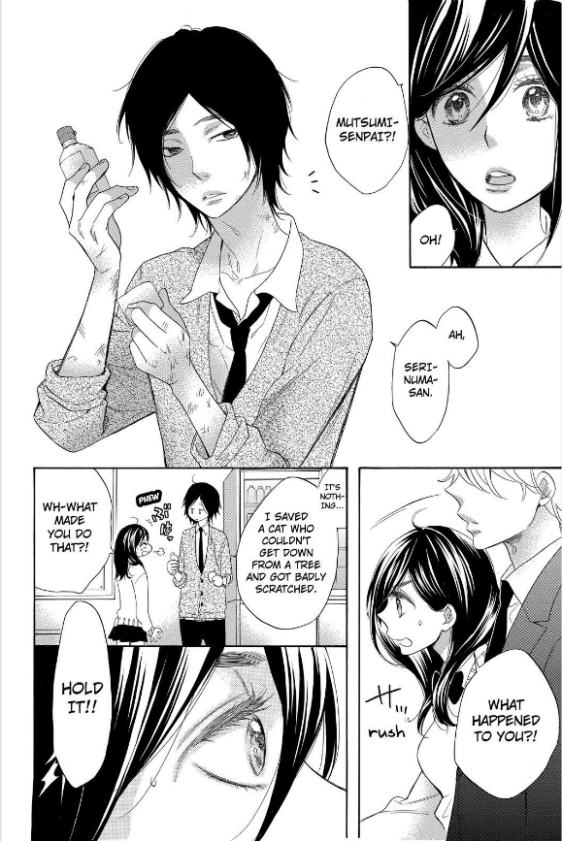 While many of her suitors are taken in by her dynamite body, one in particular is an exception. Most of them initially cannot recognize Kae post-weight loss, but it’s her senior in the history club, Mutsumi, who immediately knows who she is—as if Mutsumi had been viewing her as a human being all along. Eventually, all the other guys understand that it’s her personality that makes Kae beautiful, but Mutsumi’s presence is the first sign that body positivity is an underlying message in the manga.

Throughout the series, Kae’s weight yo-yos for humorous effect, showing that it’s just as easy for her to regain all her weight as it is for her to slim down. This might make it seem like Kiss Him, Not Me is either dealing in weight gain/weight loss fetishism, or emphasizes a certain body type as being “authentic,” but there’s even a plot point dealing with that subject. When a new character claims the old, chubby version is the “real Kae,” it’s an opportunity for the manga to tell a story about the perils of tying identity to appearance.

In general, Kiss Him, Not Me shows that it puts more consideration into its themes than one might expect at first glance. I don’t intend to spoil the ending, but I will say that the series stays strong even as it concludes. The finale feels a bit rushed (as if the series needed to wrap up sooner or later), but it’s not nearly enough of a blemish to ruin all of the positives and positivity this manga offers.

Like what you read? Check out my Patreon and Ko-fi!

Information:
Serinuma Kae’s best friend and fujoshi comrade, Nakano Amane shares in Kae’s penchant for pairing boys in their class. They disagree as to whether their classmates Igarashi and Nanashima should be paired in that order, or the opposite (7×5, Amane’s preference).

Amane is into seiyuu talk shows and otaku events, and has a non-otaku boyfriend named Mikoshiba.

Fujoshi Level:
Little is precisely known about Amane’s fujocity, but it appears to be comparable to Kae’s.

Information:
Nishina Shima is an extremely wealthy cosplayer, fanfic and doujinshi creator, and fujoshi who finds herself attracted to fellow fujoshi Serinuma Kae. As the only girl among Kae’s suitors, as well as the only one who directly understands her taste for yaoi, Shima uses this advantage to get a leg up on her rivals. Like Kae, Shima is a fan of the series Mirage Saga and Katchu Love, but their interests in opposite pairings can cause some tension.

Shima loves beautiful things, though her definition of beautiful focuses on how people are inside. Though Kae believes she met Shima at Comic Market for the first time when Shima rescued her from a creepy photographer, in fact they had met much earlier. Shima had been interested in Kae prior to her weight loss, but was originally unable to recognize her after the fact.

Fujoshi Level:
The quality of Shima’s doujinshi is high enough for Kae (pre-transformation) to buy all of them. In addition, her collection of fujoshi material outstrips even Kae’s.

Information:
Serinuma Kae is a high school student whose dramatic weight loss as a result of the trauma of her favorite anime character dying gives her an inadvertent makeover.  Afterwards, she attracts the attention of a number of boys (and even a girl) at her school. At first unrecognizable to even those close to her, Kae’s devotion to her favorite pairings and series at first overwhelms her potential suitors (especially her extensive merchandise collection), but they all come to accept it sooner or later, especially given the genuine passion she exudes for her yaoi pairings.

Kae’s favorite series are Mirage Saga, which is home to her dearly departed favorite character Shion, and later Katchu Love, an anime about a samurai armor that can transform into a handsome man. She shares her fujoshi hobbies with her best friend Nakano Amane, as well as one of her suitors, Nishina Shima.

Fujoshi Level:
Kae’s fondness for Katchu Love and the pairing of hero Sametora Hyakka and his armor Akane may or may not have caused the angry spirit of the real Sametora to achieve peace and pass on to the afterlife.

I’ve been reading one of Crunchyroll’s latest manga, Watashi ga Motete Dousunda (aka Kiss Him, Not Me) by Junko, which is premised around a fujoshi who loses a ton of weight after her favorite anime character dies and so inadvertently gives herself a makeover that attracts all the guys. Given the idea that the main character Serinuma Kae is supposed to be absolutely gorgeous, I find it interesting how this is expressed, because it’s somewhat unconventional for shoujo manga.

When looking at characters in manga, one can generally get a sense of who the artwork is trying to attract based on how characters’ sexual features are drawn. In manga for girls, even when a character is supposed to have large breasts, they tend not to really stand out compared to how they’re portrayed in boys’ manga. This is quite noticeable, for example, when looking at the difference between how the character Maya looks in the Survival Game Club anime vs. the manga. Another example is when a work depicts its female characters wearing unrealistic shirts that look practically painted on. You rarely if ever see this in a shoujo series.

Kae has what I would call a face that is fairly typical for beauty standards in shoujo manga, but her body is closer to what you would find in a bishoujo series, that is to say a manga for guys all about attractive ladies such as Love Hina, making her a hybrid of sorts between the two styles. Moreover, while the clothing isn’t so unrealistic so as to basically be super spandex, there are times when Kae’s figure is accentuated and her clothing clings to her chest. Again, this would not be so surprising to me if it were in a series that ran in, say, Dengeki Daioh, but Watashi ga Motete Dousunda is definitely a shoujo series, as evidenced by the fact that so much effort is made to portray the guys themselves as various degrees of angst, handsomeness, and dream-boatitude.

Watashi ga Motete Dousunda is not the only series to do this, though maybe there’s something to be said (about me or manga more generally) about the fact that the first example that immediately came to mind was another fujoshi-themed manga, Mousou Shoujo Otakukei (aka Fujoshi Rumi) by Konjoh Natsumi. Like Watashi ga Motete Dousunda, Konjoh’s series portrays its guys as tall, attractive fellows in that way you’d more typically see out of shoujo manga, but the girls, especially the character Matsui Youko, are given a kind of physical attractiveness that is more in line with guy-oriented stuff.

In his introduction to his book The Moe Manifesto (a collection of industry, scholar, and fan interviews about the subject), Patrick Galbraith makes mention of how Azuma Hideo, the “father of lolicon,” created his cute girl characters by combining the expressiveness of shoujo characters with the bodies more in the style of manga pioneer Tezuka Osamu. It could be said that Watashi ga Motete Dousunda is going for a similar effect, though of course calling it lolicon wouldn’t quite be accurate, even if one were to take into account how the definition of that term has changed over time, as it seems to be less about the intersection between youth and adulthood, and more about expressing a new type of ideal.