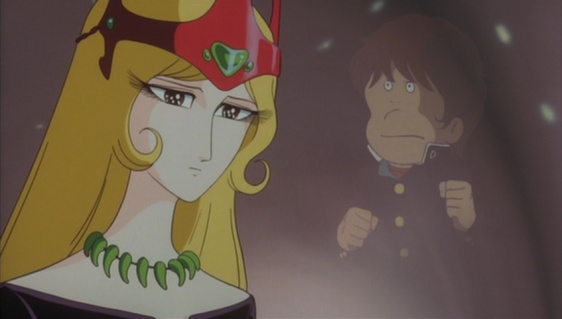 NOTE: This review is part of the 2016 Reverse Thieves’ Anime Secret Santa Project

While I don’t religiously embrace the works of Matsumoto Leiji, I consider myself a loving fan. The Rintaro-directed Galaxy Express 999 film is far and away my favorite work of Japanese animation ever, and the gravitas-laden feel of Matsumoto’s manga never ceases to draw me in. When approaching the film adaptation of Queen Millennia, however, I came to it with a vague inkling that I should expect something different. Years ago, the film was discussed by the podcast Anime World Order, and the main thing I remembered from that review is the fact that its director, Akehi Masayuki, is not exactly known for subtlety. With films of bombastic super robots and handsome shounen heroes to his name, my expectations could be summed up as “Matsumoto through the lens of wild action and spectacle.”

Queen Millennia certainly lives up to that expectation, but what I find more prominent is just how discombobulated the entire film feels.

The story of Queen Millennia is set in the far-flung year of 1999, and centers around a woman named Yukino Yayoi, who, unbeknownst to her co-workers, is actually the secret alien queen of the Earth. Having overseen the Earth for the past 1000 years as one of many millennial queens dating back to time immemorial, Yayoi (real name Promethium II) is set to abdicate her position for the next successor and return to her home planet of La Metal. However, La Metal has its own plans and now seeks to destroy the Earth. Queen Millennia must now defend her adopted homeland from her own people with the help of a young boy named Hajime.

There is a generally haunting quality to Matsumoto Leiji works that appear even in adaptations, and Queen Millennia is no exception. Scenes of destruction, pans over wide swathes of land and outer space give the impression of an expansive universe with a great deal of history. However, at numerous times during the film, the atmosphere feels as is if it all but takes over the film, sacrificing the coherency of the narrative along the way. There are numerous plot points in the film come too abruptly and then fade away, as if the viewer is only given the Cliff Notes version of events.

We learn almost immediately that Yayoi is Queen Millennia, a role whose purpose is woefully under-explained. When the soldiers of La Metal attack the Earth with their futuristic spaceships, they’re held back by the weapons of Earth, including fairly outmoded ones such as harpoons and catapults. For some reason, despite ruling over the Earth secretly for thousands upon thousands of years, and even bringing up the fact that humankind is violent and prone to war, the La Metallians mention that they did not expect the people of Earth to have spears and rocks. The film picks up towards the end, especially when the spirits of the former Queen Millennias are summoned, and they each have secret space battleships buried in the Earth with their faces emblazoned on the bows, but that sort of energy and bizarre presentation feels like it should have come much earlier.

I suspected that Queen Millennia was suffering from being a film adaptation of a longer series, and I was right. There was both a five-volume manga series by Matsumoto, as well as a 42-episode anime. If you go to Wikipedia and read the plot summary, it makes a lot more sense and gives the impression that many important plot points are set up and executed over a long period. The Queen Millennia film, in condensing all of that into two hours, leaves a good deal of story by the wayside.

However, this issue cannot fall squarely on the shoulders of being a “summary movie,” because other even longer Matsumoto works have been successfully adapted to film. The aforementioned Galaxy Express 999 film takes a massively long-running manga and anime and transforms it into a feature-length work, but the compromises made for time help connect the narrative rather than scramble it. They visit far fewer planets, but the ones they do are directly relevant to the events at the climax of the film. Notably, when they reach the last stop, the name of the planet is changed from “La Metal” in the original to something that effectively drives home the major plot twist while also transforming what took minutes in the anime TV series into mere seconds. While I haven’t actually taken a look at the TV series or the manga of Queen Millennia, very little gives me the impression that it has these sorts of considerations built in.

Ultimately, I think the positive qualities of Queen Millennia are its excellent atmosphere, its strong emotions, and its visual spectacle. The issue with it is that these qualities come at the expense of a coherent story, and much of the time devoted to showing fights or the world could have been used to provide a better sense of the stakes at hand and the significance of Queen Millennia herself much earlier in the film. By the time the film starts to pick up, it’s already about two-thirds over, and it leaves a feeling of what could have been.

Last note: What is going on with this guy’s hair helmet? He’s taking the Jotaro hat-hair thing to a whole other level. 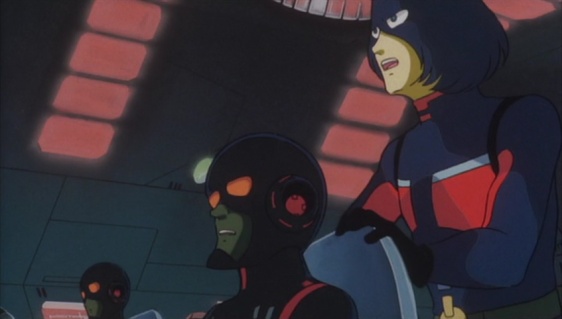