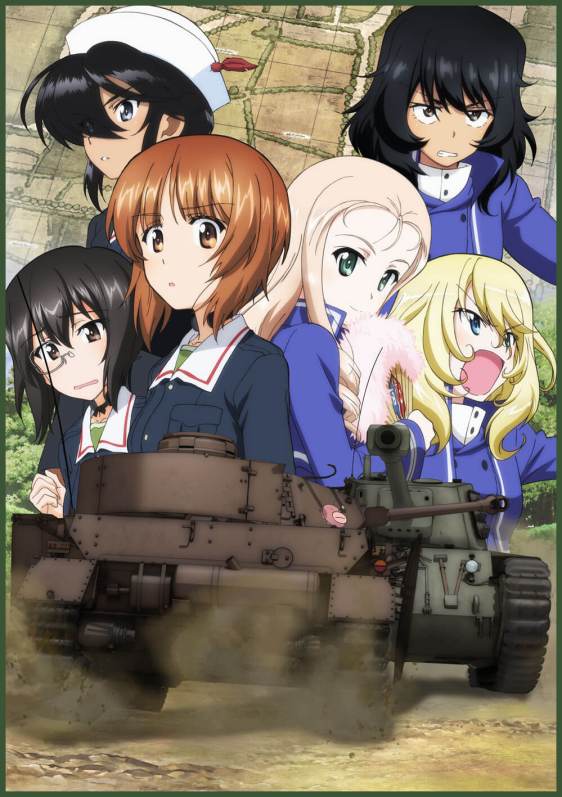 What I’m about to say might sound like I made up the whole thing, but I swear it’s true.

It was at a screening of the Love Live! Sunshine!! film that I struck up a conversation with a young mother. Although she was there in part to accompany her daughter, she was clearly an anime fan herself. At some point, the series Girls und Panzer came up, and she expressed skepticism over the tank-battling anime. From the tone of her voice, I could sense her concern over glorification of the military, and the potential role of the series as propaganda for something more sinister.

I tried to assuage her fears and present the anime as more of a sports series with a plot close to that of Love Live (save the high school from shutting down by winning a big competition). I don’t know whether or not she ultimately believed me, but I understand her hesitation, especially given today’s political climate. Although I consider myself a fan, in a world where guns are glorified and strongman politicians try to create cults of personality built around violence, I sometimes grapple with my fondness for Girls und Panzer.

I’ve argued before that Girls und Panzer separates a love of tanks and strategy from a love of warfare and nationalist loyalty, and I still believe this to be the case. In the anime’s setting, tanks are considered purely for friendly competition, and all ammunition is designed not to kill. There’s even a team of characters introduced in the first film who are basically a criticism of meaninglessly charging toward defeat out of a sense of “honor.” But it’s not as if the series is impossible to interpret as pro-military, especially if one takes only a surface glance at it. And in this world, sometimes a surface glance is all anyone has time for.

Girls und Panzer is not entirely devoid of concerning elements, as I think it’s hard to actually fully decouple tanks from their origins—especially because all the tanks in the series are from around World War II. As an individual viewer who tries to stay open yet critical, I feel that I’m able to stay open but at least somewhat skeptical. I can see what the series does well and the positive messages about keeping things in the realm of mock combat, and at the same time, my radar goes up for more alarming aspects. However, I’m aware that it’s possible someone more naive or predisposed to enjoying the glorification of military violence might take from Girls und Panzer what they want, and in the process twist the friendliness of the series into a “cute girls tell me war is good” message. It’s the old Gundam problem, where toy sales of cool giant robots obfuscate the anti-war message. As to whether or not Girls und Panzer is anti-war, it at least portrays a world where true war no longer exists.

Having the heroines use the minds and tools available to them to overcome opposition and achieve their goal is simple and effective storytelling. Couching it in historic military hardware makes it a near-endless pool for nerds to deep-dive into. But while I truly think that the series is not made to push people towards a militaristic patriotism, I can’t deny that some of the ingredients are there. It sounds odd to say that supervision is necessary to watch Girls und Panzer, but I think there’s a certain truth to it. If someone can’t provide their own voice of reason and caution, it can be treacherous territory.

After having watched the famous bodybuilding documentary Pumping Iron (1977) featuring Arnold Schwarzenegger and Lou Ferrigno, I think that bodybuilding might not be such a bad premise for an anime or manga series.

The reason I came to this conclusion is that there is an important performative aspect to bodybuilding competitions, and I could see this being depicted in a manner similar to a series such as Ariyoshi Kyouko’s Swan, which is about ballet, or Miuchi Suzue’s acting-themed Glass Mask. The way that both the appearance of the body and the way that posing factors in as a way to highlight one’s strengths and obscure one’s weaknesses can provide ample material to dramatize matches and for an exposition-type character (e.g. Speedwagon in Jojo’s Bizarre Adventure, Ryousuke in Initial D) to go into some extremely granular detail: “His arm is at 47 degrees instead of 44 degrees, causing it to look slightly bigger than it actually is!!!”

I think the real meat of a bodybuilding competition manga would be the freestyle pose-off, where bodybuilders try to make themselves look better and the other guys look worse by changing their poses in response to what the others are doing. There’s the psychology between the competitors and the psychology of how the judges are perceiving the interaction between them, and so it would perhaps be a nice way for a strategist type to psyche his opponents out. When Akagi with Muscles makes his opponent feel smaller, this could even be represented in the art by having a guy suddenly shrink down to half his actual size.

And if you want them to look freakishly muscular, just get Baki the Grappler artist Itagaki Keisuke to work his magic.

Extra points if this were a shoujo manga.

Whenever Free! ends, it really knows how to communicate its core values, whether it’s the original series or Eternal Summer. Ostensibly about competitive swimming, these finales basically say that, unlike so many other sports anime and manga, that winning not only isn’t everything, but it isn’t even that important in the first place.

At the end of season 1, the character Rin joins his old friends for a relay at a high school competition, revitalizing the lifelong bond he’s had with them. They swim better than they ever have before and even win the race, but run into the issue that Rin is from a different school that’s also competing at the event. The team is disqualified, but what’s emphasized here is that getting first was not the point. Rather, what they have truly achieved is strengthening their relationships with each other.

In the final episode of season 2, the main cast reaches the nationals for relay, and during the race each character has a vision of the joy of swimming. The main character, Haruka, is the last member to race, and upon entering the water sees his teammates swimming alongside him. When he reaches the finish line, everyone cheers, and we’re greeted with images of the team smiling and hugging. By all narrative and film convention, it looks as if they had won the whole thing, but later we see that they only got 6th place. They weren’t celebrating their championsip, but their accomplishments as a group. Moreover, Haruka, who throughout Eternal Summer has felt pressure over the fact that becoming a professional swimmer means having to care about trophies and times, ultimately finds that, for him, winning is merely a way to swim more, a means to an end.

Free! is geared towards a female audience. Whether it’s the well-animated flexible and muscular swimmers’ bodies on the cast, gentle yet strong personalities, or their close and sometimes tumultuous bonds, this is an anime that provides visual fanservice in a way that not even series like The Prince of Tennis or Kuroko’s Basketball could offer. Those other series, still grounded in their shounen sports manga formulas, end up emphasizing winners and losers first and foremost, but Free! is all about the relationship known as friendship, reflecting a desire to get away from the stereotypically male desire of victory through competition.

This is not to say that manga for male audiences based in competition necessarily always emphasize winning (see the manga Touch!), nor that there is no such thing as a manga for a female audience that stresses the competitive environment (Chihayafuru). However, when looking more broadly, what I find is that series that try to draw in men and boys primarily will often use friendship and teamwork as a means to victory, while series that target women and girls will do the opposite and use competition as a means to friendship and teamwork.

Sometimes targeting a demographic isn’t wholly intentional, but this is how a fanbase is formed anyway, and other times it can be hard to tell which is which. It might even flip back and forth throughout a given series. Free! doesn’t have any of that ambiguity. It knows exactly what it wants, and in the end we have to wonder for ourselves if winning is that big of a deal.

All across the Aniblogospheriversemension, an amazing thing is happening.

Episodic bloggers are making really good posts full of interesting content, sometimes even better than anything they’ve written in the past. And they’re all posts about the soccer anime Giant Killing.

I’m not sure why this is happening. Perhaps it’s because Giant Killing is a show with a lot of meat to chew on, or maybe it’s being held up by World Cup fever. For whatever reason though, anime bloggers are producing high-quality Giant Killing posts. They’re analyzing character motives, they’re breaking down the pace of the episodes and the strategies used by each of the teams, and they’re sometimes even eschewing summarizing episodes in favor of transmitting their feel and excitement and discussing the way they themselves relate to the show.

The payoff for all of this suffering comes in being able to feel the rush of adrenalin when a play comes together. When that happens, you know the makers of the show did something right, because you believe it.

I always thought of Kuro as simply a strong hard player with no particular strengths mentally (other than screaming his guts out and be a total idiot). Hence, it is a huge surprise for me to see that he actually has the ability to read the game more effectively than anything that I expected. A high line will always have a huge danger in the offside trap, and someone who can read the game can reduce the chances of the offside trap being broken.

The 8th episode of Giant Killing sees the likely conclusion of Tatsumi’s engineering of the squad and probably finding a settled lineup. It also reveals a real method to his madness in the process. However, football is a results business, and Tatsumi will eventually have to get some results out of his vision.

We despair when an athlete retires at the height of his powers; we want to watch greatness as long as possible. But we also lament when an athlete sticks around past his expiration date. It’s a horrible double standard. I respect a guy who knows the right time to walk away, but I know it’s a difficult choice. How many of us could suddenly abandon our jobs at such a young age?

And that’s just a handful. The more you explore, the more you’ll find that Giant Killing might be the best thing to happen to episode blogging in a long time.

Oh, and this goes a long way in fighting the image that anime fans are a bunch of sports-hating nerds who look upon the athletically fit with disdain, and it’s done fairly naturally. It’s not like anyone is actively writing these posts to not seem like a geek. We’re anime fans after all.