“Decompression” has been a hot topic in the American comics community for a number of years now. Characterized by a high panel count with each individual panel being relatively “light” on information, it is noted as being the primary mode of panel progression in manga as well as an increasing presence in American comics. Among superhero fans however, it seems to garner a particularly adamant resistance, one that goes as far as to champion “compressed” storytelling in contrast to it.

A cursory investigation on the topic of decompression on comics sites and blogs results in far greater instances of harsh criticism aimed at decompression than ones defending it, with the criticisms usually pointing out a lack of paneling efficiency or an unsatisfactory amount of story development within a given chapter. Because of the thin, monthly format release traditional to superhero comics, decompression is thus characterized as being a waste of not only time and (page) space, but also money. “Why show in five panels what you could easily show in one or two?” is the question lobbed at manga and decompressed comics in general.

Panel efficiency, and for that matter storytelling efficiency in general, is important. A story which gives the impression that it is wasting a reader’s time is a story that will probably never finish for the reader, but what is most fascinating about the criticisms directed towards decompressed storytelling is how it reveals the priorities and values of the American comics community. Consider the following comment from 2004:

Amazingly, at a time when new comic titles are lucky to survive beyond 12 issues, we are seeing comics where an entire month is devoted to the protagonist talking to his girlfriend. Most of us have had relationships that didn’t last that long. It is only a matter of time before we will see a superhero title get cancelled before the hero even makes his first appearance in costume. Imagine “Superman” getting the axe just before the rocket lands in Smallville.

No wonder it now takes five issues for Spider-Man to beat the Green Goblin nowadays. 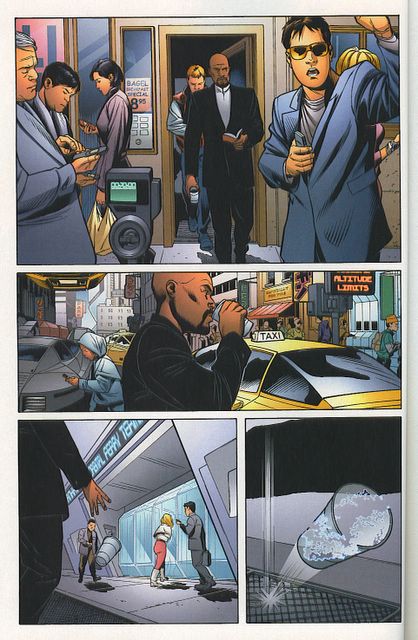 It’s a city in the future (a bagel breakfast cost 9 dollars, some futuristic cars and ad scrolls, the parking meters, the coffee cup disintegrates before it hits the ground).
The main character is black and looks like Avery Brooks, as someone pointed out to me when issue #6 came out. (Sorry, I can’t remember who it was.)

Umm … yeah, that’s it. Four panels for that???? If you found this comic page floating along our hypothetical street after someone in a fit of pique after spending 3 bucks on this ripped it out and hurled it to its fate, you would know absolutely nothing about this comic book except that it’s set in the future. That’s it. Would that make you want to buy the book?

They make a fair point. You don’t want a story with so little content that it becomes completely forgettable. However, from the above statements, you can begin to see how the concept of “content” is defined by the American superhero comics community. Content is a superhero getting their first costume. Content is Kal-El’s ship crashing in Smallville, Kansas. Content is Spider-Man foiling the Green Goblin. In other words, “content” consists of crystallized plot points within a story, things you can point to in a summary however large or small to say, “these are the moments of importance.” What content is not, apparently, is the silent expression of a moment in time or an entire month devoted to a main character and his relationship with his girlfriend. That those elements are considered to be superfluous to what “really matters” is, I think, the root of major misconceptions when it comes to understanding decompression or manga-style paneling.

If you were to go up to a manga author and say to them, “Your manga wastes the vast majority of its space,” they would probably look at you incredulously, because efficiency in page layout is actually very important for manga creators. If you then pointed to a Silver Age superhero comic as an example of brilliant economization of panels, they would probably react with still more disbelief, amazed at how much the page seems to be weighed down by its own contents. This is because the concept of “panel efficiency” is defined differently between the American superhero comics tradition and Japanese comics tradition. The difference can be summarized to some extent as the contrast between efficiency defined as the greatest amount of “stuff” packed into the smallest amount of space possible and efficiency defined as a slick, streamlined experience, but that doesn’t quite tell the whole story. 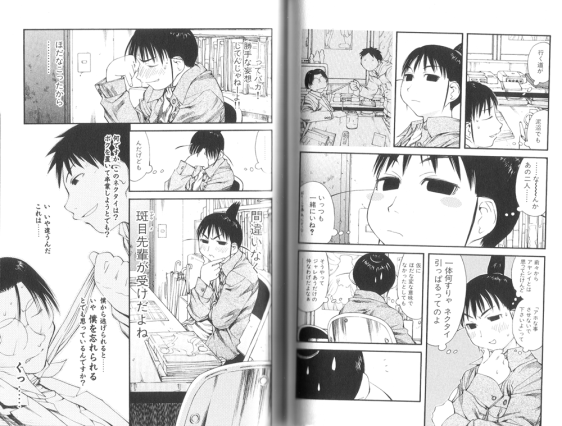 Above is a scene from Genshiken, a comic about a group of nerds who hang out together. It’s one of my favorite moments from my favorite manga about my favorite character, to the extent that I use it for the Ogiue Maniax banner. In it, Ogiue, the girl with the “paintbrush” hair and this blog’s namesake, has just witnessed a frivolous argument between two guys in her club, and is using that as fuel for an elaborate fantasy involving the two guys as romantic partners. Partway through, she tries to curb her imagination, but it’s so futile that she seamlessly transitions back into the fantasy.

Looking at those two pages, this moment is expressed in 11 panels. While you could make this scene more “efficient” in the American comics sense and just drop it down to maybe three or so panels—one for her beginning to fantasize, one for her trying to stop, and one for her continuing—it would change the very nature of this scene. It wouldn’t necessarily be a “worse” depiction, but the emphasis would be different. In panel 2, you see a closeup of Ogiue’s face with no text. From it, you can sense that the gears in her head are beginning to turn. Then, in the subsequent panels, the thought comes to life, growing slowly as if it has a pulse and rhythm all its own. The panels show Ogiue from different angles with varying expressions on her face, punctuated every so often by a brief pause, allowing the reader to see into her mind, not just in terms of what she’s thinking, but the process by which her thoughts unfold. So while the broad arc is “fantasize, pause, fantasize,” it is the “decompression” of that moment which gives it strength as a moment of characterization.

You may be thinking that the reason I like these pages are because of the fact that Ogiue is in them, but it’s actually quite the opposite. Moments like these are why I grew to like Ogiue in the first place.

Decompression in comics is not the same as having “natural-sounding dialogue” or having a moment feel more “realistic.” While those end up having a presence in many decompressed comics, especially in many of the American comics which have been in that vein, they’re not the reason decompression happens. Instead, decompression is about giving moments in a comic room to breathe, to show that those spaces in between the “major points” are important in their own way, or perhaps just as, if not more important. The result is that it affects everything else in the comic, from characterization to page design.

That is not to say that decompression can be used as a default excuse to defend the pacing of a comic. A comic which meanders, whether it’s manga or a superhero comic, can be enormously frustrating, but there is a big difference between “being slow” and “being directionless,” and the idea that “nothing is happening” may actually just be based on a pre-existing valuation of certain traditional elements within American comics that was less emphasized in Japanese comics. It is also important that decompression not be considered automatically a better form of comics expression, because the artistic tradition that has grown out of superhero comics is just as valid as any other. The rich “information density” of a “compressed” comic is its own sort of adventure, and you can even find some manga that utilize it to a certain degree, such as the work of Shirow Masamune (Ghost in the Shell, Appleseed). On that note, it would also be a mistake to say that a comic of purely decompressed panels is better than one consisting of entirely compressed panels. This is because not only is it impossible to truly achieve both (even the most “decompressed” panels involve some compression and vice versa), but also because individual execution and personal preference play enormous roles at that point. Perhaps some of the trouble brought on by the presence of decompression has less to do with the properties of the concept and more to do with the growing pains that have come from transitioning and adapting it into the American superhero comics culture.

Sometimes I think “decompression” is both the right and wrong word to describe this style of storytelling in comics. On the one hand, it does a good job of bringing to mind the “room to breathe” concept, emphasizing the lingering, undefinable inner emotions of a character or growing tension or the blow-by-blow impact of a fight scene. On the other hand, it also implies that the “significant” portions of the story are being pushed further apart from each other, when what is really happening is that the “small” moments are being regarded as anything but.

25 thoughts on “Explaining Decompression in Comics”