The depiction of race and culture in Pokemon over its nearly 20-year history has been a work in progress. Much of this has to do with the very Japanese origins of the game and their exportation to the rest of the world. A mostly assumed Japanese cast of characters suddenly wasn’t, like when the character Sakaki was renamed Giovanni to evoke the image of an Italian mob boss. At the same time, Pokemon with seemingly innocuous elements within Japan such as Jynx became a legitimate concern against the increased awareness in the United States of the history of discriminatory visual depictions of black people. Since then, thanks in all likelihood to its international success, Pokemon has taken considerable steps to try and be more culturally sensitive and inclusive, mainly through the depiction of characters with different skin tones and features. In some cases, the characters have more definite racial features, and in others they’re left vague, and the question of whether or not an “ambiguous brown” is for the better becomes an especially difficult question that is nevertheless worth exploring.

The change to include characters who are neither vaguely white or Asian in appearance began with Pokemon Black and White, a series which I would argue not-so-coincidentally takes place in Pokemon universe equivalent of New York City, one of the most ethnically diverse cities in the entire world. Unlike the regions of Kanto, Johto, Hoenn, and Sinnoh (all based on areas of Japan), the Unova region (Isshu in Japan) would not reflect the NYC influence properly if everyone was of the same skin color (what sometimes gets referred to as Friends syndrome). 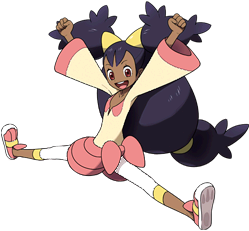 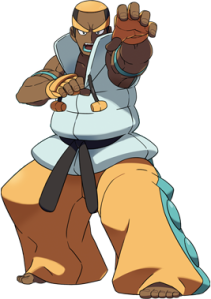 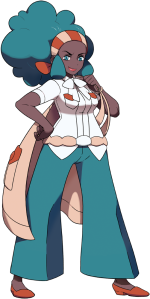 Major characters of color were introduced during these games, such as the Gym Leaders Lenora (Aloe) and Iris, as well as the Elite Four’s Marshal (Renbu), all of whom are bosses one must face before eventually challenging the final opponent, the Pokemon League Champion. All three of these characters are shown to be strong trainers, and Iris even featured prominently in the Pokemon anime. At the same time, all three possess varying degrees of ethnic identifiers. Iris is difficult to pinpoint, Marshal has features which indicate black, and Lenora is undeniably black to a possibly stereotypical fault. Originally wearing an apron in her official design, the proximity of this depiction to the Aunt Jemima-esque mammy stereotypes of the United States (in a game based on a US city!) prompted a revision which portrays Lenora simply slinging the apron over her shoulder (though she still wears it in the in-game sprite). This is far from a Jynx scenario, as Lenora is both a clever gym leader and the curator of her own museum, and her design is still fairly restrained, but it is rather telling that the approach taken with the next generation of games, Pokemon XY, lean closer to Iris’s style. 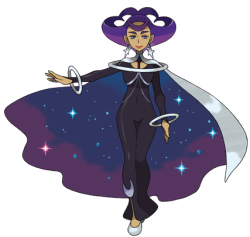 Pokemon XY, which takes place in the France-inspired Kalos region, features not only Gym Leaders Grant (Zakuro) and Olympia (Gojika) but also individual trainers throughout the game such as the male Pokemon Ranger and Rising Star. As is evident from their designs, a greater amount of care is put into them as well. The location of not-France is also perhaps an influence here, as taking into account the centuries-old Arabic influence in Europe, colonialism, and even just recent immigration from other continents creates a complex milieu of cultures that differs in significant ways from that of the United States. The vagueness of these character designs may be a reflection of that aspect.

However, the biggest change is undoubtedly the fact that Pokemon XY actually allows you to choose the skin color (and eventually hair color) for your player character. Now, in addition to choosing gender (a feature available since the second-generation Pokemon Crystal), it is possible to get closer to having your avatar appear the way you do (or don’t, as the case may be). The ethnic vagueness idea comes to the forefront here, as only three skin tones are available, which leads to the question of whether or not this is the right direction to take, if it’s perhaps a washing out of cultural identity.

I’m of two minds about this. With some characters such as the Gym Leader Marlon (Shizui), it’s actually difficult to tell if he’s supposed to be a darker skin color or just someone with a nice tan. The lack of concrete information, as well as the fact that many of the characters have very Japanese-sounding names in Japanese regardless of appearance, makes it easy to accuse them of just taking “white/Asian” designs and swapping the hues. On the other hand, it’s erroneous to assume that certain features are meant to evoke one race rather than another. After all, it’s a classic mistake to assume that anime characters “look white” because of their large eyes. When the racial features are relatively nondescript, perhaps it gives them a versatility that prevents those features from being abused as stereotyped caricature. That’s not to say that future games couldn’t benefit from adding more skin tones, for example, but there’s something to be said about allowing players to make their own interpretations.

Whether or not the racial ambiguity of character designs in Pokemon helps or hinders (or both), one positive that is hard to deny is the benefit of just having so many depictions of characters of color being happy and successful. They talk to dragons, climb mountains, run museums, practice martial arts, and go on adventures. They’re intelligent, dedicated, compassionate, funny, people you can look up to and want to know better. They’re role models with limitless potential. It’s especially notable that, in the follow-up games of Pokemon Black 2 and White 2, Iris would go from being a Gym Leader to being the Pokemon League Champion herself. The Pokemon games have always done a good job of portraying female characters, with three of the most recent games featuring female Champions, and to have a woman of color be the strongest and most celebrated individual in the land is nothing to scoff at.

In the end, what I see as the greatest contributing  factor in the depiction of diversity in Pokemon is that the series has not gotten complacent. With every passing generation of games they continue to make improvements, and it’s a likely sign that this will continue as long as Pokemon stays alive.

One thought on “Pokemon and Color”