I recently picked up Volumes 2 through 5 of one of my favorite manga in recent years, Mogusa-san. Featuring a girl who eats anything and everything and has developed seemingly superhuman skills in order to get as much food in herself as possible without anyone noticing, it’s basically a series made just for me. One question that arises from reading Mogusa-san is, how do you keep this premise going? What kinds of characters do you introduce as complements or foils to Mogusa herself? The answer is, a closet picky eater who has some of the qualities of a tsundere without necessarily falling squarely into that archetype. 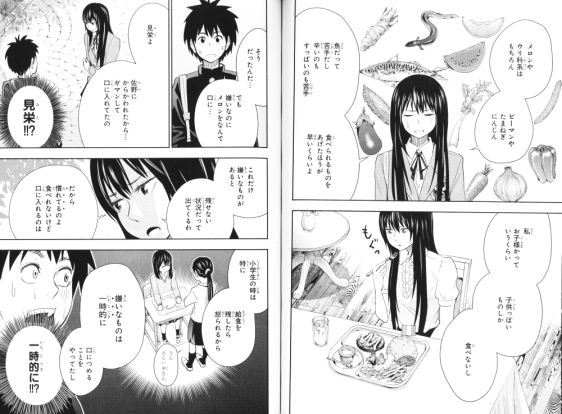 Taira Chigumi is the president of Mogusa’s class, and a seemingly strait-laced, no-nonsense individual. However, she harbors a deep, dark secret: she has the palate of a 10 year old. That means hamburg steaks and gummy candies are in, tomatoes and fish are out. Of course, she has an image to uphold, so she’s learned to basically keep gross foods in her mouth without swallowing them, and then force them down with a helping of coffee milk.

It makes sense in a way: opposite a girl who eats anything is a girl who eats almost nothing, and the added twist of giving her the taste buds of a child makes her rather endearing. When Koguchi (the male POV character) discovers her secret, she responds by violently attacking him. On the surface, this appears to be the stereotypical tsundere reaction, but it’s a little too active and conscious for that to be the case. Tsundere characters are usually based around having an almost involuntary reaction to embarrassment and having their true selves revealed (as parodied in the manga Mozuya-san Gyakujousuru, about a girl with tsundere as a form of clinical disease). Also, rather than having her priorities be love or the denial thereof, Chigumi simply wants to be friends with Mogusa because she sees how Mogusa just seems to love food more than anything else, and maybe, just maybe, if she spends enough time with her, that this quality will rub off on Chigumi as well. 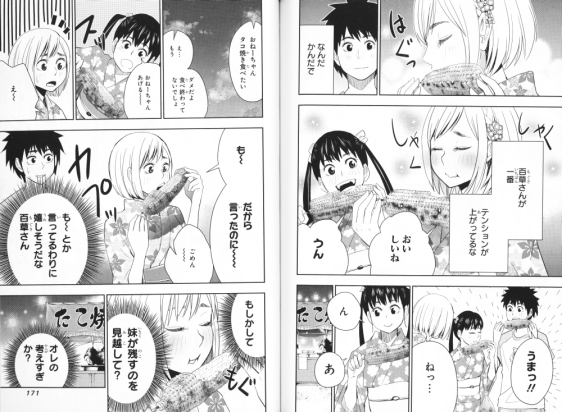 Chigumi isn’t the only character who adds to the world of Mogusa-san, as it also features a little sister who eats character-shaped foods as if she were a Titan from Attack on Titan, and even an eating rival. Suffice it to say, I recommend this series 110/10. No, that’s not a typo.