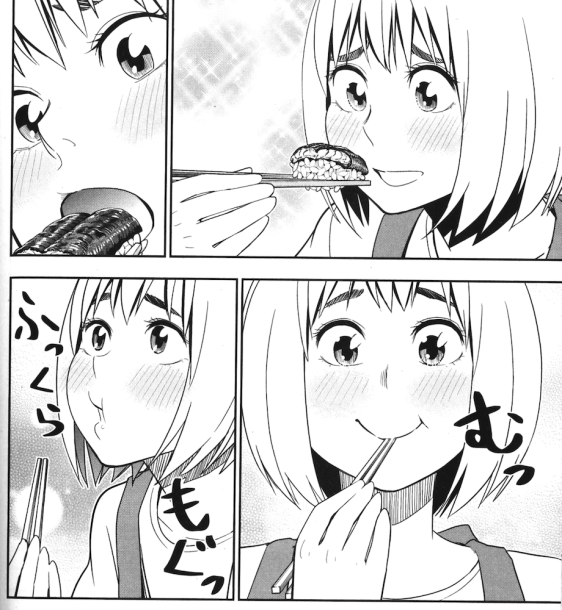 I love to eat. Just thinking about all the varieties of cuisine out there in the world, with dishes for the rich and the poor, gives me pure joy. That’s why one of my favorite manga over the past few years has been a food-themed series called Mogusa-san. The simple story of a cute and gluttonous girl who has mastered the art of stealth eating, I’ve already written two posts praising the series up and down. I recently picked up the most recent volumes and was surprising to learn that Mogusa-san as I originally knew it had come to an end. Volume 10 actually marks the conclusion to Mogusa-san, but it turns out that there’s already a sequel (more on that later). In any case, this gives the perfect opportunity to write an overall review of the manga.

Mogusa-san follows Mogusa Minori, a seemingly normal girl with a seemingly normal appetite. However, one day her classmate Koguchi Torao notices something odd: while Mogusa appears to be writing in class, she’s in fact snacking on a pretzel stick. The reason no one notices is that her pantomime is so convincing that most people assume she’s just using a normal pen. It turns out that Mogusa’s appetite is near-insatiable, and that she sustains herself by eating constantly, hiding her food in plain sight. After Koguchi reveals that he’s aware of her secret, the two of them become “food buddies,” visiting snack shops and other food establishments to bask both in the quantity and quality of various foods. 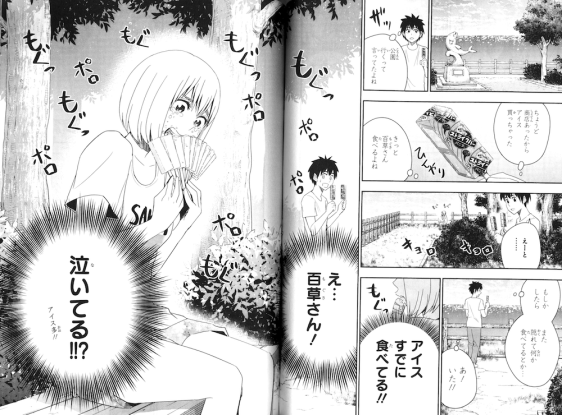 Generally speaking, there are two different types of food manga. There are the series that bask in portraying the simple joy of eating and drinking, such as Sweetness and Lightning. These works portray characters with wide-eyed expressions as food brings them true joy, resulting in “food responses” that are intense but not especially over-the-top. Then there are the manga that make eating and drinking the most powerfully dramatic and sensual experiences possible. These are the Yakitate!! Japan-type series, where tasting and creating foods becomes a religious experience fueled by impossibly superhuman abilities. One thing I love about Mogusa-san is that it possesses elements of both worlds.

When Mogusa has to engage in covertly satisfying her never-ending munchies, the series emphasizes the physical limits that Mogusa pushes in pursuit of eating. Whether it’s eating a stick of dango in 1/60 of a second, hiding candy inside the corners of her jaws in case of emergencies, she always has a trick (or a pastry) up her sleeve. However, when she’s allowed to just eat without feeling any sense of shame, especially when she’s with Koguchi, the look on her face as she bites into a succulent piece of meat or slurp some delicious ramen carries the same joy as a tamer degree of food manga. While Mogusa’s expressions are near-orgasmic at times, they’re not “actually orgasmic” as one would find in Food Wars!

While the concept might seem like it overstays its welcome, and a part of me expected that might be the case, Mogusa-san actually provides both enough narrative development and a sufficiently robust supporting cast that the series never gets tiresome. Koguchi and Mogusa bond over the course of the ten volumes in a beautiful way. Characters like Taira Chigumi (Mogusa’s opposite in that she has developed ways to hide the fact that she has the palate of a 10-year-old) and Tabe-chan (a professional competitive eater who considers Mogusa her life-long rival) add a surprising amount of variety to the theme of eating. Because these characters grow as well, Mogusa-san shows itself to be remarkably heartfelt while still remaining true to its core themes. Although there’s clearly a decent amount of experimentation in order to keep the concept in motion, the entire manga ends in an extremely satisfying way that leaves little room for disappointment.

So where does that leave the sequel? For whatever reason, it was decided that Mogusa-san would take on a new form, and it has now been replaced by a new series called Mogusa-san wa Shokuyoku to Tatakau (“Mogusa-san Fights With Her Appetite”). Taking place after a short timeskip, Mogusa is now a college student in Tokyo, and because she no longer has her family to support her regularly, she’s trying her best to refrain from eating all the time. The result is that Mogusa-san desperately tries to stick to “only” three meals a day that, while enormous in quantity for the average human being, are clearly signs of Mogusa trying to practice willpower and diligence when viewed in the context of the previous series.

One of the two most notable changes in this new setting is that Koguchi is no longer the perspective character, and readers are instead more privy to Mogusa’s own inner thoughts. The other big change is that there appears to be less of the shounen-esque “wacky stealth eating,” giving the sequel a somewhat mellower feel. A part of me definitely misses the old style, but I am quite curious about how college life is going to treat Mogusa.

You’ll know in just one chapter if you’re going to like Mogusa-san. For me, I think it took about four pages. It’s just a food manga that has never let me down, and I’m more than happy to keep reading it with the awareness that Mogusa Minori is a kindred spirit.

4 thoughts on “Mogusa-san: The Joy of Superhuman Eating ”