I don’t believe all that strongly in “show, don’t tell.” It’s effective as a basic guide to help people understand the power of visual media, or as a helpful rule to teach people that subtlety is a thing, but it runs the risk of being wielded like a sledgehammer, similar to the concept of “character development.” Telling instead of showing has a purpose and can be used well, though effectively doing so is arguably even more difficult. 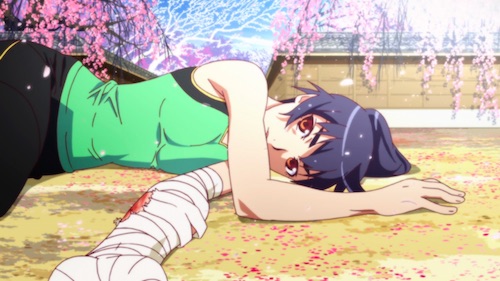 I recently finished Hanamonogatari, which for those who’ve lost track of all of the different titles is the end (or perhaps extended epilogue/adventure unto itself?) of the second series. Given the characteristically heavy amount of dialogue that this series is known for, and both the criticism and praise it receives for doing so, I had to return to what is perhaps the biggest question to deal with when reviewing or analyzing Monogatari. Is it actually possible for a series that obsessed with words to be follow the idea of “show, don’t tell?”

The Monogatari series, and Nisio Isin in general, revels in long dialogue that tells the viewer or reader what’s going on. There are seemingly endless descriptions by characters about how they’re feeling and fewer expressions and actions that reflect those emotions. It can come across as very long-winded, and I think that finding the series to be unenjoyable as a result is not surprising or exactly a problem. However, Monogatari is frequently about words themselves, and how they can be transformed or carry different meanings, especially through the use of Japanese as an ideogram-based language. Puns and wordplay and general use of homonyms is core to the series, and if a work is that obsessed and built around looking at and examining the occult power of words, how much is lost in a less dialogue-heavy work?

A counterpoint to this is the more recent Aquarion Logos, where the heroes battle monsters that are actually the essences of kanji ripped out and mutated. I think the similarities to Monogatari are quite upfront, and I even jokingly call it Aquarimonogatari myself. Here, rather than engaging in extensive dialogues and conversations, a lot of the action comes from mecha battles and more typical anime character interaction hijinks. Words hold a similar power in Aquarion Logos that they do in Monogatari, but this is usually expressed in scenes where the loss of corruption of a word causes accidents and other horrible changes in the world.

So in terms of the question of “is it actually possible” to make a series that is so focused on the nature of words to be less expository, the answer is “yes,” but then one must ask to what extent it transforms the function and feel of the work itself. Can Aquarion Logos go as deep into exploring the interplay between words in terms of their appearance, sound, and cultural weight as Monogatari when it has all of these surrounding qualities that are more in line with a typical series? Or is perhaps Monogatari just as “guilty” of doing the same because it has this very otaku-focused set of characters that play just as much with the idea of “harems” in anime as they do the power of writing and speech?

2 thoughts on “Verbose Anime Where Words are Everything: Monogatari Series and Aquarion Logos”