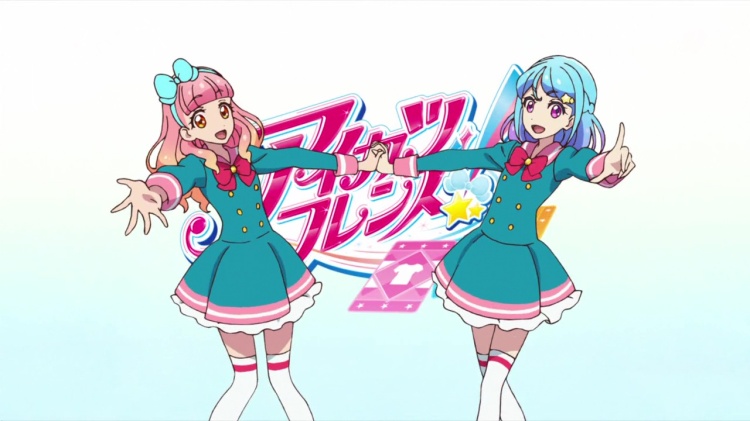 Aikatsu Friends! is the second reboot in the popular Aikatsu! franchise, and based on early impressions, it’s trying to change the formula in a number of ways. While the basic premise is largely the same as in previous iterations—girl goes to a special idol school and aims to become a great idol through the power of friendship, effort, and merchandisable cards—I feel a strong desire from Aikatsu Friends! to differentiate itself from its predecessors.

Aikatsu Friends stars Yuuki Aine—though, perhaps more accurately, it could be said to star “Yuuki Aine’s friendship.” That’s because, as one might expect, the new series is all about bonds on a much greater level than Aikatsu! and Aikatsu Stars! Where those anime would display friendship, ultimately the idols have very strong auras of individuality even as they form idol units. With Aikatsu Friends!, the very premise of being an idol is tied to duos because the default groups are performer pairings called “Friends.” Moreover, even the Aikatsu! tradition of the main heroine standing in front of a show title card and introducing the series has changed slightly, as seen above. Now, both Aine and her idol partner Minato Mio are shown speaking together.

Aine herself reflects the “us” mentality of Aikatsu Friends! in interesting ways. What stands out to me most about her is that her goal isn’t directly idol-related. Every previous protagonist has had “being an idol” as their driving force, whether it’s just wanting to try it out or looking up to another and aspiring to be like them. Aine’s dream, however, is to make a million friends, and becoming an idol is presented as a means to that end. Provided we view fans in a non-cynical light, being an idol can be a rather efficient way to reach that high a number. And while there’s always a chance that Aine’s goal will shift as she learns to love being an idol more and more, the fact that she’s presented this way initially again puts emphasis on idols in pairs over idols as individuals.

Is it friendship, teamwork, or that much more? Ultimately, Aikatsu! is a children’s franchise, but I suspect this series is going to be very popular with yuri fans even compared to older Aikatsu! anime. It’s potentially a little too on the nose, but the explicit focus on pairings—especially girl-girl pairings—seems like it’d be catnip to that fanbase. When Kamishiro Karen and Mirai Asuka, the top “Friends” group known as “Love Me Tear,” are shown being 100% in sync with each other in terms of movement and even seemingly finishing each other’s sentences, I have to give a second look.

One last thing I noticed is that Aikatsu Friends! has done a really good job of showing the difference between a fledgling pair like Aine and Mio and Love Me Tear. From their idol fashion to just the behavior described in the previous paragraph, there’s just a stark contrast between beginners and veterans. It presents a clear point for Aine and Mio to aim for, and it has me interested in where they and their friendship will go.