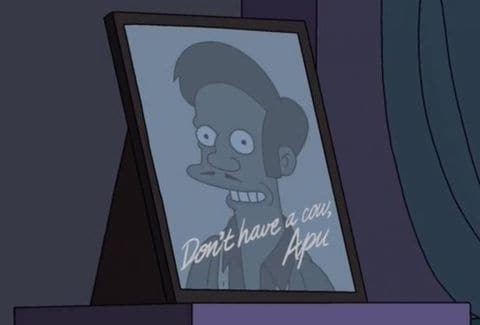 The Problem with Apu, a documentary by comedian Hari Kondabolu about growing up Indian with the well-known Simpsons character as the most prominent representation of his people, has been the center of a new and energized discussion about stereotypes and tokenism. Recently, an episode of The Simpsons referenced this debate, and it was criticized, including by Kondabolu himself, for being dismissive.

Wow. “Politically Incorrect?” That’s the takeaway from my movie & the discussion it sparked? Man, I really loved this show. This is sad. https://t.co/lYFH5LguEJ

But the more I think about this scene, the more I’m uncertain that the writers of The Simpsons are actually opposed to Kondabolu. What I believe happened is that the writers tried to be a little too clever for their own good in trying to explain their stance.

The last scene of the episode has Marge reading Lisa a bedtime story while trying to censor all of the unsavory parts, only for Lisa to ask for everything to be kept in. She proceeds to say, “It’s hard to say,” Lisa responds, breaking the fourth wall. “Something that started decades ago, and was applauded and inoffensive, is now politically incorrect. What can you do?” She then looks at a photo of Apu, which says, “Don’t have a cow, Apu.”

Reading this one way, it seems as if Lisa is saying, “Oh well!” and that the people finding Apu “politically incorrect” are wrong. The “Don’t have a cow” can be thought of saying, “This isn’t a big deal. However, the scene, especially the use of that classic Simpsons line, sticks out to me in two important ways.

First, it’s a famous catchphrase from the earliest episodes of The Simpsons TV series originally meant to show Bart’s rebellious attitude, but is now viewed as a relic of its time. As far as I know, it hasn’t been used on the show in years except maybe ironically, and it dates any episodes in which it is used as being of the fairly distant past.

Second, it’s being attributed to Apu, a Hindu. With that in mind, the line can be interpreted differently. “Don’t have a cow” now references the fact that it is morally wrong to eat beef according to Hinduism.

Together, I believe the scene and that photo are highlighting a couple of things. For one, there are parts of The Simpsons once thought irrevocable that in hindsight had to change with the times. The “bad boy” Bart Simpson and his once-signature catchphrase have been supplanted by even more controversial characters with mouths that are far more foul. The Bart of the early 90s wouldn’t last today. The Simpsons is not as immune to cultural shifts as might be assumed for a show that’s been on TV for decades.

The Apu-Hinduism aspect touches on another consideration: cultural context changes how words and phrases are interpreted. A culture that assumes America and whiteness by default has classically resulted in The Simpsons and its particular portrayal of life, but if the presumed target was an Indian demographic all along, how might it have changed?

Together, these two points reveal to me a desire from The Simpsons to approach the criticisms brought up in The Problem with Apu with a degree of subtlety, and the issue is that The Simpsons has never been a vehicle for nuance. Sure, it’s been extremely clever, sure, and some of its humor in the past has required viewers to think a little harder, but an age of social media and the speed at which online discourse occurs means it ended up vulnerable to the harshest interpretations, with no real way to defend itself.