In today’s environment, the “pervert with a heart of gold” anime and manga archetype has not aged well. While characters such as Great Teacher Onizuka, Miroku from Inuyasha, and Saeba Ryo (City Hunter) are ultimately presented as those who will fight for what’s right, their willingness to cop a feel or lift a skirt becomes less and less charming in consider the current age. They’re ultimately fictional characters, so they can afford to be flawed, but one person’s “acceptable quirk” is another’s deal breaker. They’re not automatically villains or abusers, but they can be increasing difficult to rally behind—and I say this knowing that Ryo, for instance, is classically quite popular with female readers. But I don’t think the solution is to pretend perverts don’t exist, or to portray them negatively, and in fact, I find that anime and manga are slowly moving towards a new type of ogler for the current age.

Before continuing, I understand that my discussion of the “well-meaning pervert” is rather heteronormative, owing to the fact that these characters are derived from a tradition of hyper-straight male protagonists. When you change the dynamics of gender and gender representation, the topic enters a whole new dimension. I’m open to thinking more in that direction, but it goes beyond the scope of this post.

The “respectful pervert” actively acknowledges his love of women’s bodies, but doesn’t step over crucial boundaries—a devoted believer in the mantra “look but don’t touch.” From this cloth, two recent and prominent examples are Space Dandy from Space Dandy and Sword from GARO: Vanishing Line. 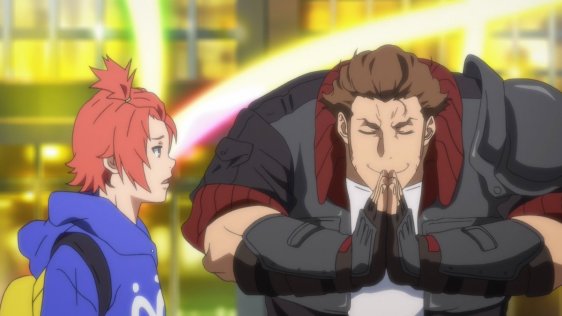 Both will regularly express their love of breasts, but will remain more or less cordial. Dandy mostly indulges in his fascinations at “Boobies,” a restaurant whose purpose is to allow and encourage ogling, without physical contact. Sword’s tendency to offer a prayer of appreciation for nice breasts might potentially draw unwanted attention, but his overall actions do not encroach on women’s personal space.

This new-type pervert might not be to everyone’s tastes, but I find that vis significance stands out more when comparing him to another attempt to dial down the pervert archetype: the passive harem protagonist. This archetype is perpetually in a position of convenience to have things happen to him as a way to resolve the character of responsibility. A lack of direct intent, e.g. “Oh no, I tripped fell into her breeeaaasts!!!” means self-control as an issue is ignored. In contrast, the respectful pervert is active in his expressions of sexual desire, but ultimately shows restraint. Power remains in the women’s control, without pushing the onus of responsibility onto them.

What do you think of the respectful pervert? Is it one step forward, two steps back? Is it a character you can get behind? I’m curious to hear opinions from anyone and everyone.

3 thoughts on “The Respectful Pervert: The New Ogler Archetype in Anime and Manga”