Last year I wrote a post titled “Explaining Decompression in Comics” in response to what I felt to be persistent misconceptions concerning decompression in comics storytelling. “Decompression” is characterized in these instances as using multiple panels to do what can be done in just one panel, and the gist of my argument was that decompression is less about total page count or delaying the rate at which a story is told and more about how information unfolds. It was quite a popular post, and it seems to have helped people get a better understanding of some of the particulars of decompression, especially in terms of manga paneling. However, even before I wrote that post, I was well aware that the opposite problem exists, where some readers of comics, particularly manga readers, can have trouble with the way “compression” works, especially in superhero comics of the Jack Kirby tradition. That is why I am writing this followup, to point out different ways as to how content can be conveyed.

Before I begin, I want to make something of a correction to my previous post that also applies to this one. In using titles like “Explaining Decompression” and “Explaining Compression,” I may give the impression that decompression and compression are simply things which comics “do.” This is not exactly true. Rather, decompression and compression are best thought of as descriptions of a variety of elements and how they interact within a comic, words which help to summarize an overall effect achieved by the relationships of many constituent parts such as panel layout, density of information, and the arrangement of elements within a panel. Also, I’m associating “decompression” with manga and “compression” with American comics due to their respective histories, but I’m well aware that the line has never been rigidly defined.

In a recent article comparing the manga Suppli and 2011’s Batman #7, Forrest Helvie criticized Suppli for being overly compressed while praising  Batman for avoiding this problem, an odd opinion given manga’s notoriousness for being “too decompressed.” While this usage is somewhat erroneous, the nature of that mistake brings up some important points about the meaning of “compression.” Essentially, he associates visual conciseness with decompression and visual complexity with compression, when such distinctions are non-existent. A comic can be concise and compressed, just as one can be elaborate and decompressed, and in fact those two ideas better summarize the visuals of Batman #7 and Suppli respectively.

Even the seemingly easy-to-understand compression turns out to not be so simple, so it should come as no surprise that American comics and their tradition of compression can be a tough read for those unfamiliar with it, notably readers of manga. While the stereotype is that manga fans’ dissatisfaction has to do with the content itself, characterized by caped musclemen and good vs. evil dichotomies, I would say that it also has a lot to do with how those comics work visually.  More specifically, the problem is that a highly compressed comic can make a reader more accustomed to the decompressed nature of manga feel as if the story is dragging along, creating a sense of impatience.

This can seem rather peculiar, given that decompression is stereotyped as taking forever to get to anything significant, but the word impatience takes on a different meaning depending on whether we’re talking about decompression or compression. For decompression, a sense of impatience has to do with the feeling that a comic is taking forever to get to where it needs to be. Impatience towards compression, on the other hand, derives from a sense that the story being told is not moving as quickly as your eyes want to, and this can be a significant hurdle which the inexperienced must overcome if they are to derive greater enjoyment from such comics.

The above page, taken from a scene in Crisis on Infinite Earths, DC Comics’ first mega-crossover, called the “Battle Around the World,” is a classic example of complex compression, a big fight scene with simply a lot of figures acting and participating, with the text boxes very thoroughly explaining the context in which the battle is occurring. Though there is a cohesiveness to the page as a whole, this comic places incredible importance on each individual panel, where even the smaller elements within each panel encapsulate some distinct meaning. Each panel tells its own dense, rich story, a glimpse at events in every corner of the planet, and each character is posed to show them performing an action which defines their character to some degree. In the first panel for instance, the Green Arrow shoots from his bow and Starman is firing a blast from his signature weapon, the Star Rod. The image composition of each individual panel is vivid, each of them related to each other through similarities in both form and content.

For someone more used to manga, the way in which this information is organized together can be overwhelming. Whereas a character may be placed and posed to influence the reading direction of the page in manga, here the characters and panels are more self-contained. As a result, the manga reader may start to feel as if the story comes in fits and starts, almost as if someone were slamming the breaks every time there was something interesting to see. Manga and other comics which are more decompressed present panels as fragments of a whole, but here, panels are whole ideas unto themselves.

If we look at Batman #7, we can see that the word bubbles are fairly precise. There is no deluge of visual information requiring the reader’s attention. However, each panel is still being presented as a whole nugget of information, communicating a clear and specific point in every instance. That is not to deny the overall relationship the panels have with each other or the page on which they sit, but if you then look at Suppli, while it has some panels which present information as dense exposition, each panel (as well as each visual element within the panel), appears to cascade into the next, with the reader collecting bits of information along the way. Keep in mind, however, that compression and decompression, though essentially operating on opposite philosophies, can co-exist in a story, and the dividing line between them is not absolute, though one is often more present than the other.

Decompression is increasingly a part of American comics, but the long-standing history of compression in American comics can be seen even in the ways a lot of more current comics have incorporated decompression. Marvel writer Brian Michael Bendis, for instance, is known for his snappy, natural-sounding dialogues which occur over multiple panels and pages, and which lend his comics a sense of decompression, but different artists have use different ways to portray those extended conversations, some of which are more compressed than others. Similarly, Chris Ware’s work (something decidedly non-superhero) can be both sparse and minimalist or extremely detailed and elaborate, but the paneling used in his comics also shows signs of an American comics tradition, albeit transformed heavily. The panels are somewhere between existing for complete information while also trying to hold back and let themselves strongly present their relationships to the panels around them. 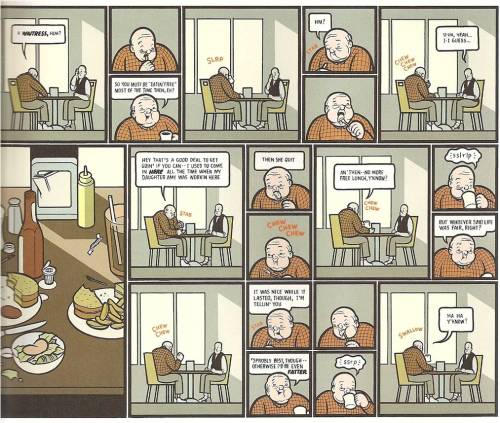 So in the end, what can be done to help the reader for whom compression is a problem? In my opinion, the key is mainly awareness of how the panels operate. If you find yourself being weighed down by the comic, then just try to approach it one panel at a time. Think of the panel in a compressed comic as a lake or a pond. You dive in to examine its breadth and explore its depths, and then surface before moving on to the next one. Over time, your experiences will accumulate, but it’s important to let them build up.

I was a guest on the Webcomic Beacon, a podcast dedicated to (you guess it) podcasts. As a follow-up to my post Explaining Decompression in Comics, we discuss the concepts of compression and decompression in comics, what they mean and how they’re used, and how you could potentially use it in your own work. Have a listen and leave a comment, either here or there.