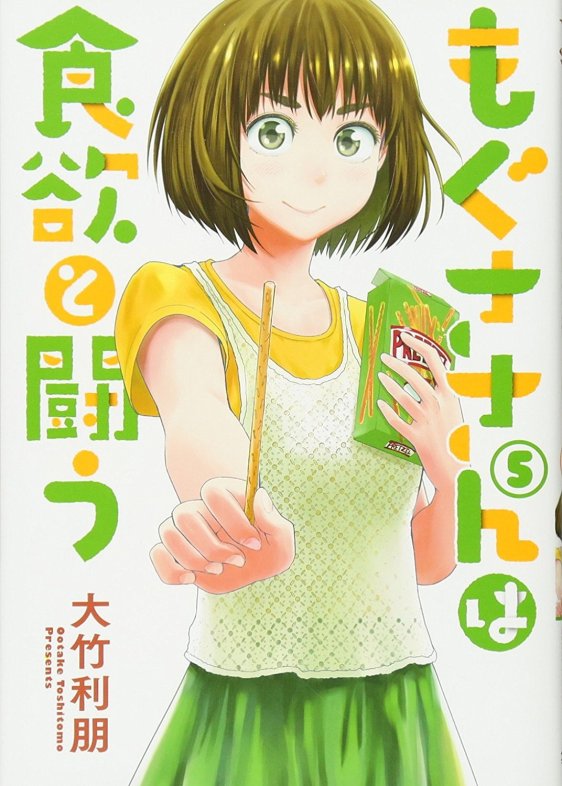 Whether she’s a high school student discovering love or a college student striking it out on her own, the gluttonous Mogusa Minori is among my all-time favorite manga characters. Earlier this year, the story of a girl whose fondness for food transcends human limits had concluded in the fifth and final volume of Mogusa-san Fights Against Appetite. I’m not going to retread a lot of ground because my previous review still holds up, but I do want to elaborate upon the final message of the series and its overall positivity.

The main premise of Mogusa-san Fights Against Appetite is that Mogusa, whose appetite is virtually endless, is trying to transition into a more normal eating schedule. Where once she could be found snacking throughout the entire day, now she wants to limit herself to “only” three meals—albeit, every individual meal is itself more like three meals to the average person. Part of the comedy of this series is that, inevitably, Mogusa succumbs to her hunger pangs and has a rapturous encounter with whatever food’s in front of her. In the final volume of Mogusa-san Fights Against Appetite, however, this begins to increasingly weigh on her mind.

Seeing everyone, including her boyfriend Koguchi Torao, working hard to achieve their dreams and win their personal battles makes Mogusa very self-conscious about the fact that her own challenge—eating somewhat like a “normal” person—seems so frivolous compared to others’. But a trip back home and some advice from her mom helps Mogusa to see differently. She has matured, and in fact her gluttony has been of great benefit to her. She’s made great friends, met a wonderful boy who’s grown into a splendid man, and given her a wealth of experiences. Mogusa ultimately decides to embrace her food lust and aim to become a gourmet writer, sharing her passion for cuisines great and small with the world.

This conclusion resonates with me greatly, and not merely because I love to eat everything as well. When it comes to food shaming and body shaming, we live in a culture where outward physical appearance and behavior are often prioritized over one’s psychological well-being. The guilt Mogusa feels over eating is not uncommon, even if it’s exaggerated in her instance. Every so often, I see someone mention that a guy or a girl are disgustingly fat and that they need to get in shape, not taking into account the inner emotions of the person they’re speaking about. Some people are better off exercising and experiencing dramatic weight gain/loss because it can lead them to greater personal satisfaction and overall happiness. For others, however, the constant pressure to match a certain beauty standard means that being more physically fit can lead to mental turmoil. There’s no universal solution, even if at least some exercise is undoubtedly beneficial in e end.

This lesson isn’t limited to food. For as long as I’ve been a part of online communities, I’ve seen people twist themselves trying to hide what they deemed to be shameful hobbies or activities. They get so desperate in their desire to not be judged by their peers that it eats them up inside (Mogusa-san pun not intended), and I’ve tried to live my own life in defiance of that. Even if there might be problems that arise from one’s own interests, it shouldn’t be repressed to the point that it crushes people from within.

While Mogusa has an impossibly petite body given how much she eats, and she’s perpetually “anime-girl cute,” even she has to fight an image in her mind that she fails to live up to. In her case, it’s the yamato nadeshiko-style ideal Japanese woman archetype. She constantly imagines Koguchi, who’s living in the old Japanese capital of Kyoto, breaking up with Mogusa because she’s not traditionally beautiful enough. This also ties into how one of Mogusa’s greatest shames is the thunderous roar of her belly when she’s hungry. In Japan, many women find a growling stomach to be embarrassing, and Mogusa’s is capable of waking up sleeping animals. To see her overcome all that and be in a happier place fills me with joy. 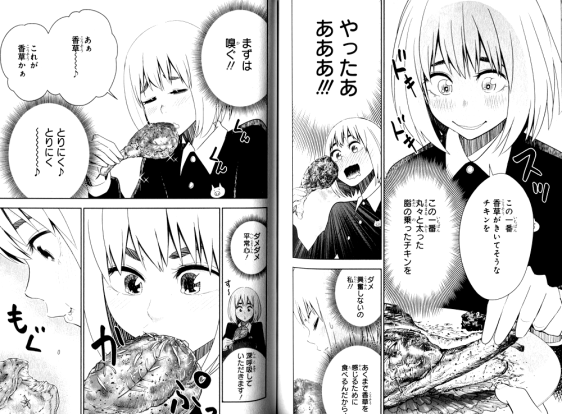 Mogusa Minori, the namesake character of the manga Mogusa-san, is my spirit animal. Her bottomless appetite, sheer love for food, and the ecstasy one her face when she does eat speaks to me on a level beyond personal. The series finished in 2016 at ten volumes, but while the conclusion of Mogusa-san would be a sad affair under normal circumstances, it was immediately announced that there would be a sequel of some kind. The result is a new series titled Mogusa-san Fights Against Appetite (Mogusa-san Shokuyoku to Tatakau), and though it is clearly of the Mogusa-san lineage, it’s also a remarkably different manga in many ways.

Mogusa-san Fights Against Appetite takes place two years after the events of Mogusa-san. Mogusa is now 18, has graduated high school, and is in a long distance relationship with Koguchi Torao, the boy who befriended her in the first series. Koguchi has moved to Kyoto to learn about becoming a professional chef, while Mogusa is headed to college in Tokyo. As a full-fledged adult, Mogusa has declared that she will no longer succumb to her cravings and will eat “only” three meals a day, partly to show that she’s matured and partly for the fact that food costs money. Unfortunately for Mogusa, Tokyo is a land of culinary temptation, and tasty devils beguile her at every turn.

The most significant change from the original Mogusa-san to the sequel is that the former is told from the perspective of Koguchi, while the newer series is from Mogusa’s. Rather than viewing Mogusa as this adorable yet eerily superhuman being, we’re seeing the world from Mogusa’s eyes, and understanding her hunger pangs in a more direct way. Because the series is about Mogusa-san trying her best to not use her many refined techniques for sneaking massive bites (instead of trying not to get caught), Mogusa-san Fights Against Appetite feels somewhat closer to a traditional food manga.

This subdued approach goes hand in hand with the fact that Mogusa is older. In a certain sense, it’s like the jump from shounen to seinen manga. As a 16-year-old, Mogusa is defined more by innocence and over-the-top antics, but as an 18-year-old she has a somewhat greater air of maturity. In other words, when teenage Mogusa ate, it was like watching a Dragon Ball Z fight. When adult Mogusa eats, it’s like watching Spike take on some thugs in Cowboy Bebop. In this respect, I do miss the style of the first series to some extent, but I can appreciate the new world of possibilities this direction opens up.

Another element I miss from the previous series is the cast of characters, many of whom were either instantly endearing or grew to become as such. However, this doesn’t mean that the side characters in Mogusa-san Fights Against Appetite are inferior, just that I long to see her old classmates. In Tokyo, Mogusa manages to meet a wide variety of interesting individuals, with a couple of characters in particular standing out:

The first is a woman named Mito Shinobu, a beautiful fellow student at Mogusa’s college who’s actually a former delinquent trying to become more feminine. Mogusa and Mito bond over their mutual desire to become more mature, but Mito is unaware of the fact that Mogusa can eat her under the table five times over and instead views Mogusa as an example of girlishness to aspire to. She’s not a foil for Mogusa in the same manner as Tabe (the professional eater from the first series who sees Mogusa as her eternal rival) or Chigumi (the picky eater whose narrow range of taste lies opposite Mogusa’s ability to eat anything), but Mito’s interactions with her are consistently entertaining. 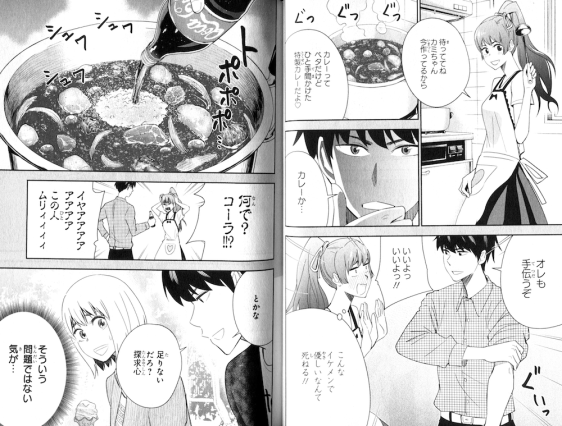 The second notable character is a guy named Kamishita, the president of the Gourmet Club on campus. While I previously believed that Mogusa was the character that resembled me most in the world of anime and manga, Kamishita is even closer. Not only does he enjoy food, he’s constantly experimenting with unusual combinations, like nattou on dessert pizza (!). His willingness to try bizarre food mashups, but more importantly his appreciation for them, sends friends and lovers running for the hills—an experience I know all too well.

One aspect of this sequel that is worth focusing on is the idea that Mogusa is eating less. After all, this is potentially disconcerting given the number of girls out there who starve themselves trying to get in shape or because they’re dissatisfied with their body images. Mogusa never really appears as if she gains or loses weight, so in that respect she’s a fairly unrealistic character given how much she typically ate in high school, but it’s worth pointing out that, even though she’s trying to control her diet, she’s not exactly munching on celery sticks. Mogusa is able to eat three to ten times as much as the average person, and even as she sticks to three meals instead of six or more, all of her portions are massive. She eats hamburg steaks so big that one could feed a family of four, and when she brings onigiri to school for lunch she takes five massive ones with her.

Mogusa-san Fights Against Appetite might very well be my favorite manga currently running. Like its predecessor, this manga speaks to the inner recesses of my soul in ways few others can. You might call it… today’s recommendation.