CORRECTIONS: Thanks to a comment, I learned that “mom” and “dad” is a term describing the character designer of a Virtual Youtuber, which made me realize that the designation in the description isn’t necessarily the other person who shows up in the video. A further look at the video descriptions shows that the woman teaching Sugomori to draw comes from the manga school Manga Kyoushitsu Minato Mirai. I’ve edited the post because the possibility is still there, but have removed the incorrect information.

I’m not terribly into the whole virtual youtuber thing, but I do have my favorites. Recently, my #1 is Sugomori, a manga reviewer who covers everything from popular titles to more obscure ones.

She’s not one of the major ones right now, but I appreciate her focus on manga over games. Some of her videos (like the one above) have been subtitled into English, so you can enjoy them even if you don’t know Japanese.

However, I’m not just here to recommend a Youtube channel. I also want to point out the connection between Sugomori and Kotoyama, author of Dagashi Kashi and Yofukashi no Uta.

Sugomori’s character design is actually by Kotoyama, as she explains in her introductory video. That’s a pretty huge get for a Virtual Youtuber, I’d think. But also, Sugomori calls Kotoyama “mom” (okaa-sama) in her descriptions.

I don’t know if Sugomori is actually Kotoyama’s daughter, or if it’s just a joke or something [Turns out it’s a joke]. Whatever the case, I was surprised at the possibility that Kotoyama might be a woman! It would be cool if that turns out to be the case. 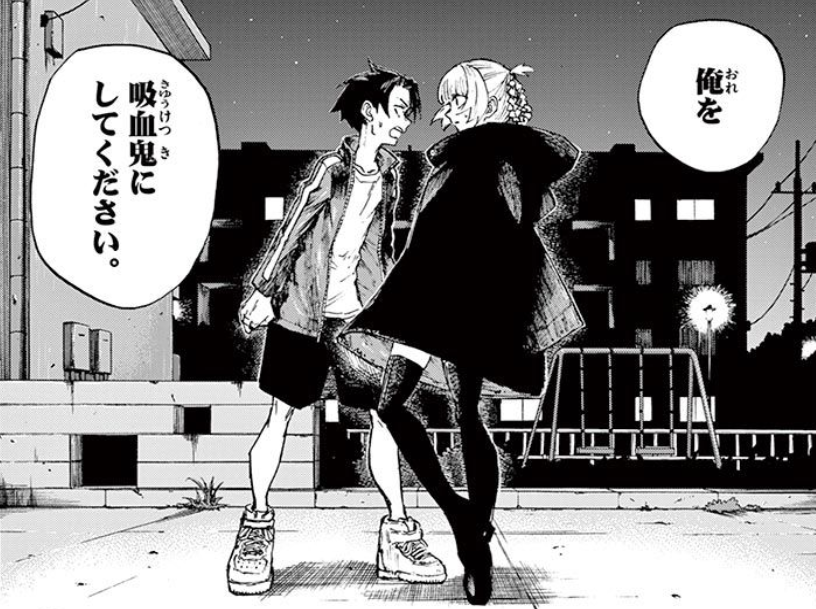 Kotoyama, the author of Japanese snack-themed manga Dagashi Kashi has a new manga: Yofukashi no Uta (“Song of Staying Up Late”), named after a song by the band Creepy Nuts. Eschewing a specific focus on a product or gimmick this time, Yofukashi no Uta maintains a similarly entertaining and humorous format of back-and-forth banter, a mysterious girl who seems out of this world, and a boy who feels stuck in place.

Yamori Kou has been having trouble sleeping lately, as if he’s missing something. His malaise causes him to inadvertently push friends away, and he wanders around at night aimlessly. He meets a girl, Nanakusa Nazuna, who seems to enjoy the evening hours with a cheerful and gregarious attitude, but who turns out to be a vampire. Nazuna gets a taste of Kou’s blood, which turns out to be unusually delicious, and after some conversation, Kou decides he wants to be a vampire himself. However, in order to be turned, he must fall in love with her.

The basic dynamic between Kou and Nazuna is that Kou is okay talking about romance but gets easily embarrassed when discussing raunchier topics, whereas Nazuna is the opposite. Their contrast is fairly similar Kokonotsu’s and Hotaru’s from Dagashi Kashi, but without the focal point provided by candy as a consistent topic. I admit that I do miss the dagashi talk, but I also understand that that can’t just retread old ground. And the way Kotoyama writes character interactions is still charming, so it’s in good hands.

One big difference between Yofukashi no Uta and Dagashi Kashi is chapter length. Whereas the latter tended to be only about eight pages or so, the former is more standard shounen manga size. It gives the manga more room to breathe, and I’m curious to see how Kotoyama does over time with more space.

I’m going to try and keep up with the series however I can. With Volume 1 on sale in Japan November 18 (along with a Dagashi Kashi collection of artwork), it’ll be a great opportunity.