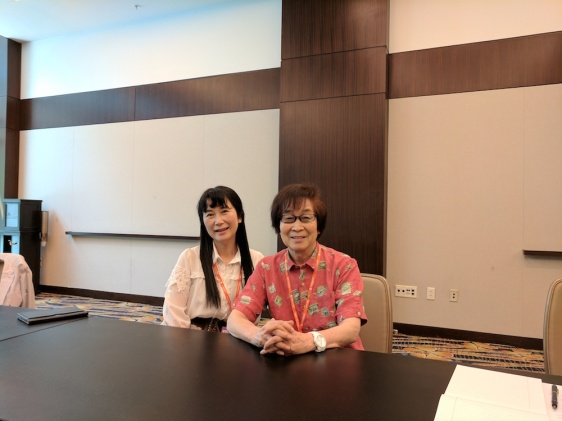 At Otakon 2017, I sat down with a husband-wife duo who are also two veteran voice actors of the anime industry. Furukawa Toshio is probably best known for playing Piccolo in Dragon Ball Z, while Kakinuma Shino was Naru in Sailor Moon (Molly to dub fans!).

I did not have enough time to ask any Piccolo questions, but if you love giant robots it’ll be worth your while.

Mr. Furukawa, Ms. Kakinuma, thank you for this interview.

My first question is to Mr. Furukawa. You played the role of Kenta in Mirai Robo Daltanias, so you had experiencing working with Nagahama Tadao. What was it like working with him?

Furukawa: I actually worked with Mr. Nagahama before Daltanias, on The Rose of Versailles. But the time of Daltanias was during the super robot era, with the iconic huge robots in Japanese culture. He brought me in saying, “You know, we have a role for a prince for you. He’s a really good-looking character. Why don’t you come in?” So that’s how I came on the boat.

I’d also like to ask you about a different, maybe very different, director: Tomino Yoshiyuki. What was it like working with him as Kai Shiden in Mobile Suit Gundam?

Furukawa: Mr. Tomino is on the opposite spectrum, I’d like to say. He is relatively the stricter type. He’d give long lectures when we were young and starting off with First Gundam. He was known as the scary kind of director.

My next question is directed to Ms. Kakinuma. When it comes to anime based on manga, oftentimes anime-original stories are considered to be not as important or significant. But the romance between Naru and Nephrite is considered a fan favorite. What was it like voicing Naru for that story?

Kakinuma: When we were voicing for Sailor Moon, unlike some of the works now where there’s a manga established, we were doing it at the same time that the manga was going on. Some of the people who worked on the anime didn’t even know that romance doesn’t happen in the manga. So when we voiced it, we were doing it as if it were canon.

You’ve both been in the voice acting industry in Japan for a long time. How do you feel it’s changed over the course of your careers?

Furukawa: When I began, “voice actors” not really a thing. We were a subgenre of the bigger category of actors, where there were actors, stage actors, etc., and voice actors were part of the mix. During that time, we were not well recognized. If you look now, though, you have voice actors appearing on TV. I’ve even appeared on TV myself. I’d like to say that we’ve gained a kind of citizenship. We’re now more recognized.

Kakinuma: Recording has changed from when I began until now. For example, when I first started, we were voicing things that were on film, projected. When a part was over, we would have to reel in the film to record again if we needed to. Now, you don’t have that “reeling in the film” time; you can just click and go back to your previous scene. It saves a lot of time.

It’s normal now to see a kind of timeline on the bottom of the screen showing where you are in that span. By going to that, you don’t need a sense of timing anymore. But back then, since there were no timelines whatsoever, we needed a kind of specialized skillset.

Furukawa: TV equipment also changed. For example, nowadays we have multidirectional digital surround sound, which gives you the ability to hear all around you from all sorts of different channels. But back then, we didn’t have any of that, so we expected everyone to hear from the two speakers. Everyone speaking at the same time would be the same as mixing everything together. Now, if you did that, you might not get the same experience, so you need to split the channels in recording. So technology has advanced, but this has gotten us to take additional time in the recording process.

My last question is about Muteki Robo Daiohja, another giant robot series. What was it like working on it compared to Daltanias?

Thank you again for the interview. I look forward to your continued successes in your careers.