1983’s Creamy Mami was the first idol anime, and it made an idol out of Mami’s voice actor as well. Watching her videos from back then, a 15-year-old Ohta Takako comes across as awkward and unaccustomed to the spotlight, even in “Love Sarigenaku” above, her most “grown-up” song. Compared to many of the slickly produced pop hits of later years, Ohta can come across as almost unprofessional, but that’s exactly where her appeal lies. When it comes to Japanese idols, there are two general directions: “unrefined and real” or “polished and perfect.”

When comparing the Japanese idol juggernaut AKB48 to the K-Pop sensation Girls’ Generation (who have been enormously popular in Japan), the latter visually comes across as a much more “professional-looking” group. While calling them idolsTheir dance and choreography are on point, and their music videos make them look like a million bucks. But while the girls of AKB48 have a kind of awkwardness about them, and many aren’t the greatest singers, there’s a sense of them “trying their best,” and this is exactly what the fans want. In other words, perfection isn’t necessarily desired. It can be, but that strain of inexperience and perseverance is just as strong. 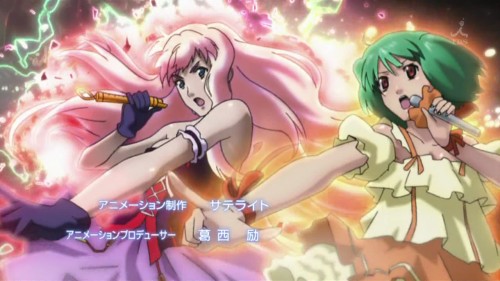 These dual forces can be seen in idol anime in spades. In Love Live! School Idol Project, the main characters are the ragtag group μ’s (pronounced “Muse”), and the defending champions are the practically-professional A-RISE, who come from the richest high school in Akihabara. In Aikatsu!, Hoshimiya Ichigo is shown as having some kind of natural spark of genuineness that contrasts her from the seemingly unassailable Kanzaki Mizuki. And in Macross Frontier, the main love triangle features, as seen above, the humble waitress Ranka Lee (right) vs. the sultry Sheryl Nome (left). In every case, what causes the “small fry” to ascend isn’t that they transform into polished and perfect idols, but that even as they improve, that unrefined and authentic quality shines through. Perhaps it says something that the main heroines of these shows tend to lean that way as well.

And yet, as touched on briefly in the beginning, voice actors who play idols in anime actually end up being idols themselves. When the girls of Love Live! hold live concerts their flaws come out, but that’s part of the appeal of seeing them in person. When watching the characters in the anime or in music videos, that imperfection doesn’t come across in the performances so much as in the dialogue and supporting materials. A similar phenomenon exists all the way back with Creamy Mami. She comes across as much more “polished” than Ohta Takako does, yet they share the same voice.

An interesting case of the strange interaction with the 2D vs. 3D and real vs. perfect contrasts are those that toe the line, like Hatsune Miku or virtual youtubers. With Miku, her limitations—the fact that her voice sounds robotic—is considered part of her appeal. With virtual youtubers, the fact that there’s a person performing behind the character is much more obvious, and the idea that they start to break down or break character is what lends a sense of “realness.”

In this regard, California-born Japanese idol Sally Amaki is especially interesting. A member of 22/7, an “anime-style characters” idol group in the vein of Love Live!, she plays the bilingual character Fujima Sakura while bringing along her own fans as Sally. Not only does she perform the virtual youtuber role as Sakura, but her native English fluency brings an interesting dynamic that highlights a sense of “realness,” especially for English-speaking fans. Not only is there often a contrast between Sally’s “cute, practiced idol” voice and her Californian mannerisms when switching between Japanese and English, but she’ll mention something that only someone growing up in the US would know off the cuff. This lets American fans connect with her sense of authenticity in ways that they might not have been able to in the past.

In the end, “real vs. perfect” is not a true dichotomy by any means, and every idol/idol group approaches that divide in different ways. Whether you’re an idol fan or not, which do you prefer?

One thought on “Real vs. Perfect: The Two Opposing Idol Values”