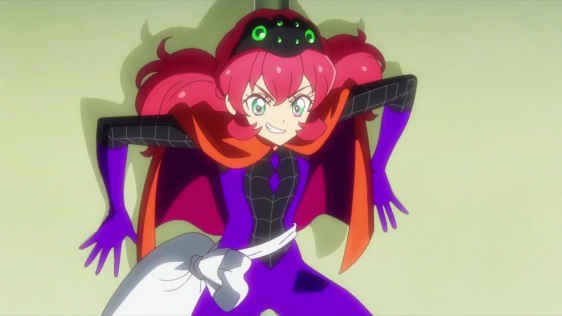 Though a little out of season, I’m going to be fulfilling a Patreon request and continuing the All Hallow’s Eve-themed anime posts from September. Here’s a look at Aikatsu on Parade! episode 5, “Lucky Halloween.”

Kiseki Raki and friends are in the original Aikatsu! universe, where they enter an idol costume contest that naturally includes singing and dancing. Highlights are both the show and the characters giving Akari some props, and Mirai Asuka’s off-brand Spider-Man costume.

I’m not deeply connected with Aikatsu! fandom, but I somehow get the sense that Akari isn’t considered as memorable as other protagonists. In a sense, she’s like the Pretty Cure Splash Star of Aikatsu!, with the unenviable task of following the influential original. In this episode, all the characters express a kind of wonder and amazement at her, and there’s the feeling that she’s made a lot of progress relative to where she began—perhaps more than any other heroine.

As for Asuka, given her love of Halloween it makes perfect sense to make her a big part of the episode. Her impish attitude is a perfect fit, though she doesn’t seem as keen on trying to prank people here. Her choice of costume is undoubtedly memorable, and it makes clear that Spider-Man is now considered recognizable in Japan. Yes, there’s the old live-action Toei series with the giant robot and all that, but I suspect this is more because of the Marvel cinematic universe. The not-quite-the-same finger-point web-slinging is a nice touch.

I hadn’t thought about it before, but this is the first Aikatsu! Halloween with a costume contest. Pretty much every other one has been about tricks or games, so having another variation on how to celebrate the Holidays is interesting. As for Raki’s costume, which is basically a giant composite lucky charm, it’s very on-brand for her. I feel like a joke could be made where Raki turns into a luck-obsessed lunatic with a mindset similar to Gudako from Fate/Grand Order. Knowing Aikatsu!, it could actually happen.

There’s one glaring omission in this episode: it takes place in the original series but there’s no Yurika in sight. The vampire goth is pretty much synonymous with Halloween, so I wonder if they’re saving her for Halloween 2020. After all, it’s not unusual for an Aikatsu! anime to run for two years.

And who knows? Maybe we’ll see an off-brand Thanos next year.

This post is sponsored by Johnny Trovato through Patreon. If you’d like to request a topic, consider becoming a patron!

2 thoughts on “Spider-Asuka and Her Amazing Friends: Aikatsu on Parade! Halloween”