A new character flips everything upside down in Chapter 24 of Hashikko Ensemble.

Shion has sprained her wrist, and the Chorus Appreciation Society is forced to do something about it. Given a few options, they ultimately land on getting an alternate pianist to accompany them, though Akira expresses that he doesn’t think anyone could really replace her. Shion pulls a favor with her mom, and gets an old acquaintance/friend to take her place: Mashino Shuusuke, a guy who carries around a sun umbrella and who just has an aura that screams “elite.”

However, after just one song, Shuusuke finds the Hashikko boys to be fundamentally inadequate. He critiques each of their weaknesses one by one—and actually declares Jin to be the most hopeless of all! While the rest of the group is eager to prove Shuusuke wrong, Jin seems uncharacteristically glum.

It’s interesting to see where each character’s singing flaws are, as pointed out by Shuusuke. It’s not easy to convey in comics, so the exposition is welcome. Also, it might be a hint at how the characters might develop over time.

Akira is trying too consciously to sing low, and his enunciation is suffering. He’s pushing his vowels out at the expense of his consonants.

Kousei doesn’t sing with purpose. According to Shuusuke, Kousei comes across as someone who thinks passion and feeling can make up for that, but it can’t.

Shinji is a total beginner, so there’s not much to be done there. Shuusuke says this as if there’s nothing specific he could say to help, which makes Shinji all the angrier

Jin knows how to “sing,” but what comes out of him isn’t “music.” In terms of criticisms, this one hits the hardest.

A Hurdle for Jin

I find the introduction of Shuusuke to be one of my favorite story developments so far because it’s the first time that Jin has been challenged as a character. Up to this point, Jin has always been the fount of knowledge who knows more about sound and music than anyone else. To have that called into question, to have someone say that Jin’s singing is merely technically proficient, is a major change-up. Adding to this is the fact that Shuusuke is clearly a legitimate talent at the piano.

The only times in the past that Jin has looked even remotely that taken aback is when he mentions his mom. We have the sense that there’s something messy underlying his interest in music, and I have to wonder if Shuusuke’s comments are related in any way.

Shuusuke and Shion (and Akira?) 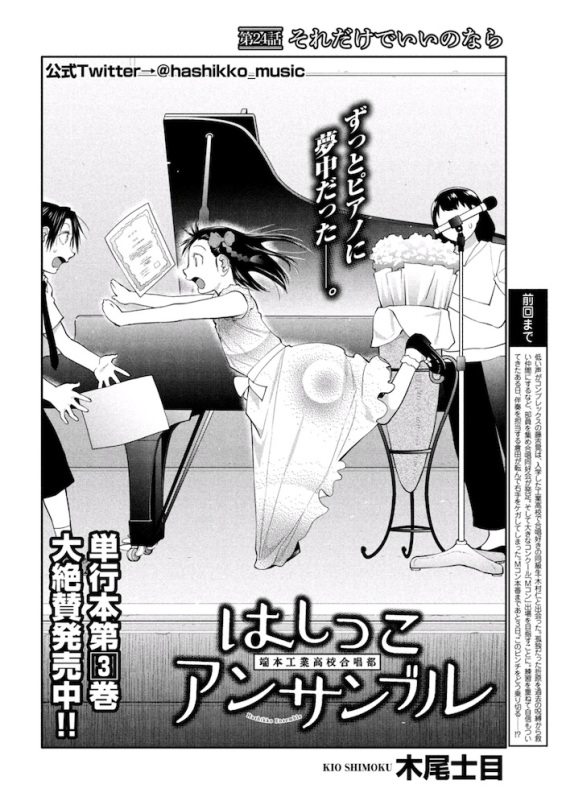 As implied by the chapter’s title page, there’s a history between Shuusuke and Shion dating back to their piano concert days (Shion, as we see, has always been herself). There’s a clear frustration he has over her choosing to go to a technical high school–my best guess is that he saw her as a rival, or at the very least, someone who’s wasting her talents. There might not necessarily be any romantic sparks (or at least not reciprocal ones), but the “childhood friend” history is a reliable, if not as common a trope as it used to be. Given Akira’s bit of blushing early in the chapter when he comments on Shion being irreplaceable, there might be some tension there.

In frustration, Shion says that it’s actually Shuusuke’s fault that things aren’t going well, and that they’re much better when she plays. It’s hard to tell if she’s just being stubborn or if there is some merit to her words, so I’m looking forward to seeing what the answer is in the end.

One thought on “You Are, All of a Sudden, a Mechanical Man: Hashikko Ensemble, Chapter 24”