I’ve come to realize that my favorite Halloween-themed episodes in anime come from the Precure franchise. This might be because it runs all year long (thus making holiday celebrations a common part of the shows), but I also think the mix of magic (in the form of magical girls) on a night associated with the occult works in its favor. Out of the many Halloween-themed instances of Precure, three stand out in particular: an episode of Suite Precure, another from Maho Girls Precure, and the movie Go! Princesss Precure: Go! Go!! Gorgeous Triple Feature

Before I proceed, here’s the requisite SPOILER WARNING.

One of my main criticisms of Suite Precure is that, once a major character development moment passes, the show acts as if the new status quo is the way it’s always been. The key example of this is when the character Siren goes from antagonistic cat character to fellow human Precure. All of her history as a villain is seemingly forgotten after a couple episodes. The one major exception comes in the Halloween episode, where the now-Kurokawa Ellen dresses up as a cat girl. When a classmate asks about her costume, Ellen (without missing a beat) casually begins to mention that she used to be a cat, which prompts the other Precures to jump in and brush it off as a joke. It’s a clever bit of continuity in a show which often put it on the back burner.

The character Atarashi Ako is herself dressed as a princess, which is also a joke based on her true identity. Amusement all around!

The Harry Potter-esque world of Maho Girls Precure lends itself perfectly to a Halloween episode. One of the running jokes of the series is the way that visitors from the Magical World will sometimes forget that they’re supposed to be hiding their identity and will just casually mention things that the Muggles (so to speak) shouldn’t know. Halloween is presented as a major exception, because in the festive, costumed environment, magicians can come as they are because people will think they’re dressed for the occasion. Even then, the Maho Girls find a way to push the limits. The star of the show in this instance is probably Haa-chan, the third Precure and by far the most powerful of the trio in terms of magic. She appears throughout the episode in bizarre costumes, like a mummy complete with sarcophagus, and an alien being taken away by Men in Black.

It’s just a fine episode of nudges and winks and fulfilling the expectations one might have for a Halloween episode in a show about wizarding magical girls.

Go! Princess Precure: Go! Go!! Gorgeous Triple Feature is actually an entire Halloween-themed movie, consisting of two shorts and one longer standard Precure movie. It was (appropriately) released on October 31, 2015. Go! Princess is already one of the strongest entries in the franchise, and many of its strengths—animation, charismatic characters, strong and positive themes—can be seen in the movie. Interestingly, the main thing the film seems to take from Halloween is the prominence of pumpkins. Whether they’re jack o’ lanterns or pumpkin desserts, the iconic Halloween vegetable seems to overshadow the costume and trick or treat aspects of the holiday. In a way, it’s probably the best of the three story-wise, but the weakest in terms of Halloween hijinks.

I do need to make a special mention in regards to the movie-exclusive transformation, though. The Cures here have a special Halloween-themed power-up that is appropriately flashy.

So those are some of my favorite Halloween anime. In the 90s, the holiday wasn’t a big deal in Japan, but has grown in prominence over the past couple of decades. If we were to move away from Halloween the holiday and more towards “monster”-themed anime, then Kore wa Zombie Desuka? would rank much higher. If you have your own special Halloween shows, feel free to leave a comment.

The Precure Pretty Store in Tokyo has a new batch of idol-style merchandise around the theme of “summer festival.” For it, each of the girls are wearing special outfits and have been separated into different groups around a common theme.

While that’s not unusual in itself, what I find fascinating is that the groups for the most part are not along traditional lines, like “show origin” or “color.” In fact, there doesn’t seem to be any real consistency from one theme to the next. Even so, I think it provides a new perspective on shared values between individual characters, so I’ve decided to lay out the categories below.

So what do you think of these categories? Do you like thinking of Precures along these lines? The one category that still perplexes me a bit is “Secret Hard Workers,” because Liko and Miki have very little in common. Is there something else they have in common that I’m missing?

And where would the a la Mode girls fit if they had to be divided into them? Would they all go into “chefs,” or would that only work for some of them? For example, would Aoi fit better in “Musicians?”

Witches were the original magical girls in anime, so it’s somewhat surprising that the now nearly-15-year mahou shoujo franchise Precure would take so long to make a series where magic in the conventional sense is front and center. That’s what Maho Girls Precure brings to the table, and the result is a series that, while not terribly ambitious, is a still a good deal of fun.

Maho Girls Precure follows Asahina Mirai, a normal Japanese girl who one day runs into a witch in training named Liko. Searching for a magical item called a Linkle Stone, the two run afoul of a villain searching for the same item. Despite the fact that Mirai knows nothing of magic and Liko’s own skills aren’t the best, they’re able to summon the legendary power of Precure, transforming into magical girls named Cure Miracle and Cure Magical, fighting off the enemy with their new-found abilities. From there, the two become fast friends, even traveling between the magical and non-magical worlds to attend school, have fun, and protect both from malevolent forces.

Given the presence of a magic school, comparisons with Harry Potter are practically invited. There’s even a wise old headmaster (though considerably younger-looking) and a stern female teacher. You might even call Mirai and Liko “chosen ones.” However, unlike J.K. Rowling’s famed series, Maho Girls Precure isn’t a detective story with the elaborate trappings of a magical world, and in terms of seriousness vs. levity remains roughly in the territory of the early, prepubescent Harry Potter stories. That being said, it’ll occasionally raise the stakes at climactic moments and pull it off well. When it comes time to finish, Maho Girls Precure pulls out all the stops in terms of dramatic flair and animation, which is customary for the franchise but always welcome nevertheless. By the end, it’s even the first to really acknowledge the world beyond junior high since my beloved Heartcatch Precure! 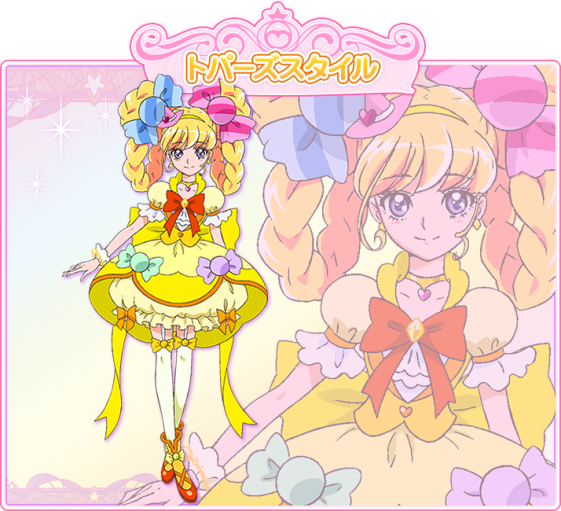 The series is not a terribly bold or daring work, but it also never promises more than it can live up to, which was the issue with the earlier HappinessCharge Precure!—a series that introduced the idea of Precures from all over the world, but never elaborated on it to a satisfying degree. Speaking of HappinessCharge, one aspect from that series utilized to greater effect here is the ability for the Precure to transform into different costumes with different abilities. While it’s not always clear why they use one over the other, they’re all stylish enough in appearance and unique enough in application to not wear out their welcome. My favorites are the topaz outfits, which carry dessert themes and also Green Lantern powers.

The aspects of the magical world I enjoyed most were the silly little quirks of a different society accustomed to spells and physics-defying elements. From the default incantation of “Cure-up! Rapapa!” to the bizarre shell-shaped sleeping bags found on the snail trains (sort of the Maho Girls equivalent of the Hogwarts Express) to the wizard versions of fairy tales (the fairy godmother is the main heroine!), I looked forward to seeing what simple yet amusing elements of magic would pop up next.

However, the most telling thing about how I view Maho Girls Precure is that my favorite part of the anime is not the heroines or their fight against the forces of chaos, but a side character, Katsuki Kana. A fan of the paranormal, Kana is quick to notice that some unusual things are going on in their town, except no one else seems to notice, and the Precures themselves actively deny it. When she first encounters Liko’s witch friends, they nonchalantly blurt out about how things are so different in “their world,” prompting a frantic expression from Kana in response. In addition to her panicked reactions towards any hint of magic, her ongoing desire to learn the truth, carry shades of one of my other favorite supporting characters in Precure, school newspaper journalist Masuko Mika of Yes! Pretty Cure 5.

Speaking of characters, I’d also like to mention that Liko is pretty much the anime version of Twilight Sparkle from My Little Pony: Friendship is Magic in both appearance and personality. Any fans of Twilight would probably enjoy her antics.

Maho Girls Precure only rarely ever had me dying to see what happens next, but its simple yet expansive relationship between its characters and their worlds made sure I never tired of it. It’s a series you can take your time with, and it’ll entertain and move, at least one step at a time.