This post was sponsored by Johnny Trovato. If you’re interested in submitting topics for the blog, or just like my writing and want to sponsor Ogiue Maniax, check out my Patreon.

There have been many attempts over the years to dethrone the Japanese children’s entertainment juggernaut that is Precure, but while Precure is squarely in the realm of the “fighting magical girl,” most of its challengers are themed around mahou shoujo’s sister genre: pop idols. This includes Pretty Rhythm, PriPara, Lil Pri, and the subject of today’s post, Aikatsu!

Aikatsu! began in 2012 as a multimedia franchise consisting of games, manga, and anime. The animated television series, created by Sunrise (of Gundam fame), follows Hoshimiya Ichigo, a girl who enters the idol training school Starlight Academy after being inspired by its top star, Kanzaki Mizuki. Together with her best friend and idol fan, Kiriya Aoi, and others she meets along the way, they engage in idol katsudou, or “idol activities.” 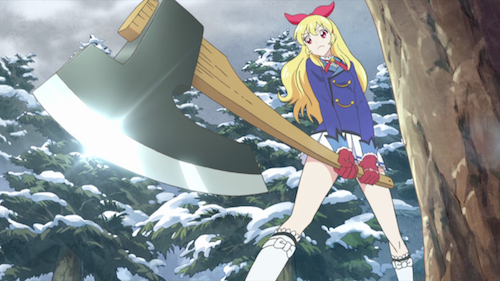 Sunrise at this point is well known for another popular idol anime, Love Live!, and despite the fact that they don’t share that much staff, the two shows are similar in feel. Both have an overall lighthearted sense of fun and engaging character interactions combined with learning and personal development. Both feature bizarrely comedic moments (the episode where Ichigo gets into an “Obari Pose” and chops down a christmas tree is famous). Both series are also so entertaining in these respects that the actual “idol performance” moments are comparatively less interesting.

However, one curious aspect of Aikatsu! that differentiates it from Love Live! (and many other anime) in terms of narrative is that Ichigo and the other idols don’t seem to have a concrete goal to aim for. The girls in Love Live! want to save their school and then win the Love Live. Naruto wants to become Hokage. Ichigo’s motivation is this vague sense of “becoming an idol,” but by the first few episodes she already is one more or less, and there just seems to be this general sense of forward progress. This is also what differentiates it from other more episodic works, or series such as Hidamari Sketch.

Aikatsu! has just enough on-going threads in the background and pays attention to its characters’ growth that the series carries a nice sense of continuity. Aoi becomes the mascot for a crepe company in an early episode, and after that you can always see a copy of the advertisement poster featuring her in Aoi and Ichigo’s room. The show also drops hints that Ichigo’s mom is a former idol, and as I continue to watch the series I’m just anticipating that moment where Ichigo discovers the truth. Every time her mom appears on screen, I think, “Will this be it?!” That desire to see Ichigo’s realization is actually one of my main motivations for continuing to watch. 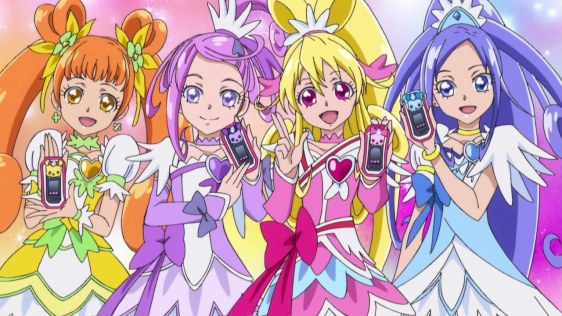 There’s one last element of Aikatsu! I want to discuss. More specifically, it’s a theory pertaining to Aikatsu!‘s relationship with Precure. When watching Aikatsu!‘s core cast, I could not help but be reminded of the cast of Doki Doki Precure!, which came out in 2013. While the characters are different enough to not feel like copies of each other, Mana’s blonde hair and pink color scheme in her transformed state resembles Ichigo’s, Rikka (blue) plays the role of the more level-headed and smarter best friend just like Aoi, Alice resembles Arisugawa Otome (orange) not only in name but also in appearance, and Makoto’s occupation as an idol (as well as her serious personality) feels akin to Mizuki. I suspect that Doki Doki Precure! may have taken some inspiration from Aikatsu! but I can’t be certain of this. That said, I recently checked out some of the character design notes for Doki Doki Precure! and noticed that Cure Sword (Makoto)’s design originally had longer hair, which would make her more stylistically similar to Mizuki from Aikatsu!

Aikatsu! has been a series on my radar for a while, that I had only briefly engaged with, but given just how entertained I’ve been by it I definitely want to watch more and talk more about it. Expect future posts, maybe?