Genshiken author Kio Shimoku has debuted a brand-new manga series this month, and it’s a bit of a departure from the otaku-centric tribulations of daily life that he’s known for. Fan that i am, I’ve decided to start doing monthly reviews for it, much like my previous Genshiken Nidaime posts.

Fujiyoshi Akira and Kimura Jin are new students at Hashimoto Technical High School. Akira sports an unusually deep voice that cracks when he tries to raise it, so he generally avoids speaking if he can help it. Jin is anything but quiet. Notorious throughout the school for his undaunting enthusiasm and his loud, boisterous tunes between classes, Jin wants to recruit fellow students to form a vocal ensemble.

When Jin notices Akira’s exceptional baritone, he sees Akira’s voice as the perfect complement to his own alto-soprano range, and becomes dead-set on having Akira join, all while unaware that Akira was actually a singer himself in middle school before his voice changed. While Akira is reluctant, he ends up having second thoughts for one major reason—Jin thinks he knows how to fix Akira’s voice.

Although Hashikko Ensemble has only just begun, the concept of a pair that’s greater than the sum of its parts has me intrigued. It’s not exactly new territory, with titles like Haikyu!! and Kuroko’s Basketball among the more famous, but I am curious to see how this turns out in a non-sports, non-shounen narrative.

Making Akira’s voice extremely deep is a simple yet unorthodox character choice. While I’m no expert on singing manga, my experience is that main characters in such series tend to stand out because they can sing extra high (such as in the manga Shounen Note) or powerfully. It’s also uncommon, despite the commonness of teenage settings in manga, for the voice-cracking that comes part and parcel with puberty to actually come up in series.

One aspect of Akira that isn’t entirely clear is whether his reticence over his voice is because of the attention he receives from the other students (who inevitably remark how “manly” it sounds), because it’s a painful reminder of when he could sing, or some combination of the two. Whatever the reason, it helps to give Akira a strong sense of character and presence, despite his fairly generic appearance and demeanor. 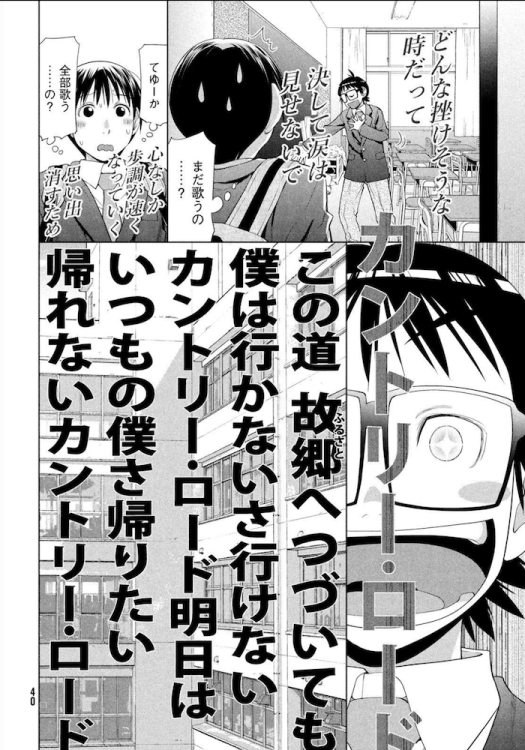 In contrast, Jin stands out tremendously. Because of the way he looks, comparisons with Onoda Sakamichi from Yowamushi Pedal feel inevitable, but two differ in two important ways: Jin seems immune to embarrassment, and he’s a “music otaku” rather than an “anime otaku.” There’s something about a guy who so overwhelmingly looks like a dork while being utterly fearless in the face of his peers that instantly appeals to me. It’s what I aspired to be in my teenage years, so I find Jin quite admirable. As for what being a music otaku means, Jin has a scientific understanding of sound and voices, speaking of vocal cord vibrations and decibels, which is why he believes he can help Akira.

While the main focus of this opening chapter is Akira and Jin, there are plenty of side characters with potential to enrich the story. As with Kio’s other series, realistic portrayals of human relationships look to be one of Hashikko Ensemble’s strengths, and I look forward to seeing how the cast at large develops. From the first chapter, the stand-out character has to be Hanzan, the wisecracking son of a Buddhist temple who actually wore a wig to school on day one just so he could reveal his bald head during class introductions.

One factoid about their high school is that boys outnumber girls by about 11 to 1. I have to wonder if this will play a major role in the story, or if it’s just for realistic flavor. I wouldn’t mind seeing some female characters join the cast (there’s already one who shows up briefly), but would also be fine if it remains guy-centric.

Originally, I was going to list every song that shows up in this chapter, only to realize that Jin sings so much that the number of tunes encroaches into the double digits, and I’ll leave it to someone who’s more of a music buff in general. Here’s a sample:

“Te no Hira o Taiyou ni” (Sun in the Palm of My Hand). A children’s song originally featured on the weekly television program Minna no Uta in 1962.

“HEIWA no Kane” (Bell of Peace) by Okinawa Yukihiro.

“Country Road” (Japanese version) by John Denver. This is the version from Whisper of the Heart.

“Country Road” is particularly significant to the story, as it’s the point where Akira is finally drawn in by Jin’s singing—particularly Jin’s ability to handle traditionally women’s roles.

This series definitely has potential, and I don’t mean that just because I’m a Kio Shinoku fan. It’s somehow both low-key and energetic at the same time, reflecting the different personalities of its two central characters.

There’s another manga that also runs in Monthly Afternoon titled Mou, Shimasen kara: Afternoon Gekiryuu-hen, which features interviews with other Afternoon manga creators. This month’s is Kio Shimoku, and in it he mentions being especially invested in Hashikko Ensemble because he doesn’t want to be a one-hit wonder after Genshiken. I hope Kio finds new success with this manga.

As for the rest of that interview, it’ll be the focus of my next blog post. SEE YOU NEXT POST.

Like this post? Feel free to check out my Patreon, or leave a tip at my Ko-fi.