Last chapter, a new girl showed up. I wondered if she was Akira’s sister, or maybe his very youthful-looking mother. Turns out the answer is “neither.”

After a bit of singing, a disheveled-looking girl has shown up at Akira’s door to tell the Chorus Club to pipe down. Akira explains that this is his next-door neighbor, Himari, who he’s known since childhood. Jin thinks she looks kind of familiar, and it turns out that she sits right behind Jin in homeroom—which means she’s been in Akira’s class all along without him even realizing it! Having not really spoken to her in a long time, Akira decides to see if she wants to walk to school with him, but when her dad answers the door instead (and tells him she’s still asleep), Akira walks away embarrassed.

At the Chorus Club “clubroom” (i.e. the corner of a stairwell), Jin teaches Akira about harmonizing, but only after a brief discussion about how the school’s been talking about Jin’s harmonizing push-ups from Chapter 5. During this time, they’re visited by two different classmates: Hasegawa, who walks away disappointed that Jin isn’t showing his muscles, and Orihara. The latter isn’t there to start trouble, but to tell Akira that he’ll be borrowing his earphones for a little while longer—noise-canceling earphones are expensive, and he needs to save up for it. Jin, however, has another idea: they’re at a school that specializing in engineering, so why not repair the things themselves? Orihara gives in, but then Akira says something that surprises everyone: “If we fix your earphones, you have to join the Chorus Club.

I’ve mentioned in previous reviews my interest in the combination of “art and science” in Hashikko Ensemble, and this chapter does a fantastic job of highlighting that aspect. It makes total sense that students of a school that specializes in engineering would try to repair earphones themselves! Combined with Jin’s generally scientific approach to singing, it means the two sides integrate more and more. His explanation of how many Western European churches are built to emphasize the “angel’s voice” phenomenon (as if Heaven itself is singing along) is fascinating.

Music and engineering are both a matter of physics, but that doesn’t take away from how impressive either one is.

It was one thing seeing Akira singing in his room with his friends last chapter, but it’s another to see him overcome enough of his self-consciousness to actually hit a note in the stairwell. The harmonizing, even if it’s mostly thanks to Jin, feels like a major accomplishment for Akira. To then see him be assertive enough to ask Orihara to join the club, it’s as if he’s grown up immensely in the span of two chapters.

There’s also the clear parallel between how Jin got Akira to join and how Akira is trying to get Orihara to join (“If we help you with this problem, become one of us”), but we’ll see if it pans out similarly.

This chapter gives a lot of info about Koizumi Himari: her history with Akira (they used to read picture books together!), her generally surly disposition, the fact that she hasn’t attended class in a while. Is she having some trouble in school—perhaps some form of anxiety? Moreover, Akira’s mom seems to think there’s always been some sparks between the two, which seems to be reinforced by Akira’s profuse blushing when he tries to ask Himari to walk with him to school. Or is it because Akira just gets embarrassed easily in general? And between Himari and Hasegawa, I have to wonder if the prospect of romance is starting to emerge. 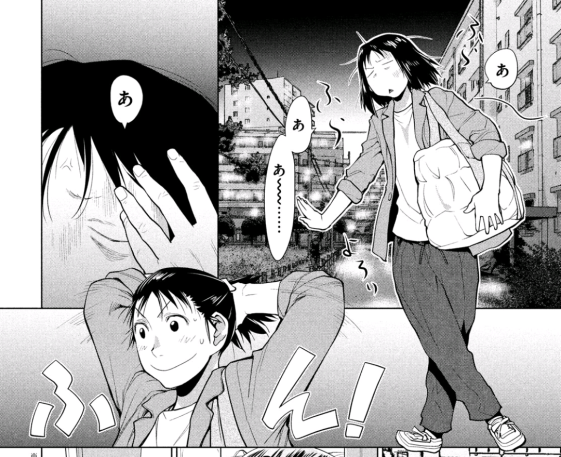 Speaking of Akira’s mom, she’s wonderful! Her first appearance in the manga is such a succinct yet effective introduction to her character. Previously established as a nurse and a single mother, she’s shown haggard from a tough day at work, but purposely puts on a more cheerful appearance for her son. That one moment says so much about her person and her way of being that I hope we see more of her in the future.

Chapter 7 is the first to have a full character introduction page at the beginning, no doubt because the first collected volume of Hashikko Ensemble just came out. The biggest reveal here is that Kurata (the super-intense, music-hating female student) is named Shion.

Actually, I call her “super-intense,” but all of the female students at Hashimoto Technical High School seem pretty powerful. I wonder what Kio’s thinking is, though it suits me just fine. It kind of feels like different degrees of Ogiue all in one series.

One thought on “Won’t You Be My Neighbor?: Hashikko Ensemble, Chapter 7”