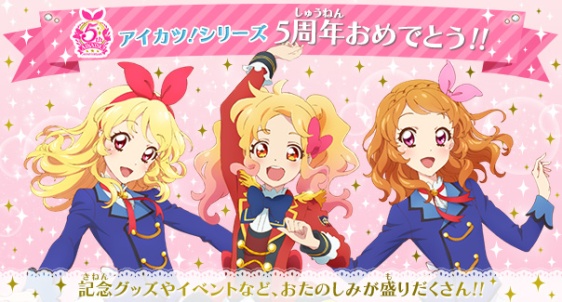 As Aikatsu Friends! inches ever closer, I find myself thinking about the longevity of Aikatsu! as a franchise. By this October, it’ll be a whopping six years old—a lifetime when it comes to children’s anime. Where other similar series have tried to compete, few have managed to hang on as Aikatsu! has. One of its closest competitors, Pretty Rhythm, eventually pivoted towards the male-idol-centric King of Prism series. Either by outlasting or outmaneuvering other idol series, Aikatsu! feels as if it’s conquered its own niche—though the exact nature of that niche is what I’m trying to figure out.

There are, of course, key differences between Aikatsu! and other idol character franchises. Series like King of Prism and Idolish 7 utilize male idols in a desire to capture a different market. Love Live! and The iDOLM@STER feel like they skew older. Macross Delta and Symphogear have idols as thematic flourishes as part of a greater science-fiction story. They cover various demographics, as well as various degrees of idol presence. Yet I feel there’s another element of difference that isn’t accounted for, as if Aikatsu! and Love Live! occupy different compartments of mental space, at least personally.

While this is only a tentative thought exercise for the sake of categorization, if I had to describe that difference it would be as the following: With Love Live! or The iDOLM@STER, I’m most interested in how the idols will react, but with Aikatsu! I’m most interested in the actions they’ll take. The way I phrased it makes it seem as if it’s a contrast between more passive characters and more active ones, but that’s not quite right. Instead, it’s more that the girls of Love Live! seem to draw their appeal from the way they behave and influence each other, while the girls in Aikatsu! feel as if they influence the environment around them.

Perhaps the reason I see Aikatsu! different is because of the fans and how they express their love for the series on social media compared to other idol anime lovers. Other series appear to celebrate cuteness and style. Fans of Aikatsu! revel in an aura of power and excitement. At the heart of this fan output remains the indelible images of Ichigo, that very first Aikatsu! heroine, as she climbs those cliffs and wields that axe. It’s as if Ichigo and her successors reshape and navigate the land while other idols move through it.

As September begins, I feel as if something is going to happening. I’ve been considering promoting the blog more than I have in the past, and really thinking about if I should make more efforts to have my posts reach people rather than writing them and waiting for readers to show up. I don’t want to push Ogiue Maniax at people who don’t care, but I do think that there are folks who might be interested in my blog, but who could very well know nothing about it. After all, I still get messages from people discovering Ogiue Maniax, albeit at a slower pace than what used to happen when anime blogging was a bigger thing in general.

This month’s special Patreon sponsors are:

I had one other new sponsor who just barely missed the cut-off point for this month, but don’t worry (and you know who you are!). You’ll see your name next month.

This month’s sponsored posts covered food anime (though it turned more into a post about the Food Network’s anime-like qualities), and Senki Zesshou Symphogear. I had a lot of fun writing both, and I’m grateful that my sponsors enjoy the fact that I will sometimes twist their topics to suit my own particular interests and way of thinking. I feel appreciated, and I’m always happy to see others interested in my thoughts on anime, manga, and other topics.

I had a kind of crazy idea for the Patreon just the other day, and I don’t know how to properly reward people if they do this, but I wanted to make it possible to pledge certain amounts that also indicate your favorite Genshiken characters, based on Japanese wordplay. It would go something like this:

What do you think of this idea? Would you be interested in pledging based on your favorite Genshiken character? Is this just another nefarious way for me to add more bad puns to the world?

When first approaching the anime Senki Zesshou Symphogear, my view of the show was colored by one experience in particular. A few years ago, I was on the Veef Show to discuss AKB0048, another show from Studio Satelight that also involved singing, battling idols in a science fiction setting (no surprise coming from the studio founded by the creator of Macross). There, Veef informed me that Symphogear was essentially a show made by a relatively inexperienced staff, and it showed. So, I went in with the impression that it’d probably look nice but be fairly discombobulated, lacking the veteran knowledge of Kawamori Shouji or others. While after watching four episodes I certainly can’t say how the series concludes or holds together, what I can say is that Symphogear is very good at conveying passion.

I’m aware that this kind of sounds like a cop-out response. How can any anime, created by teams of people, and often tied in along with a desire to sell and succeed, be any more or less passionate than others? For that matter, how can a series that combines mild yuri, skintight space battle uniforms, idols, mecha, and general fanservice be anything more than a cynical marketing ploy? However, when watching Symphogear, I can’t help but feel that all of those elements are less calculated ploys and more actually the things that the creators themselves wanted to see. I haven’t read any interviews, and I haven’t researched this show heavily, so none of what I say is backed up by hard facts. It’s mainly my impression, and that feeling says to me that there’s something beyond appealing to the lowest common denominator as an external factor in Symphogear.

Being calculated doesn’t make a bad series, and neither does being true to one’s passions result in a good series. I think Love Live! School Idol Project, for example, is a fantastic series, entertaining through and through, with lots of great characters with well-rendered personalities, but it feels on a very basic level to be a product of marketing knowledge. All of the characters, even my favorites such as Hanayo and Nico, are carefully crafted to have just the right balance of traits. It’s just that this has worked out in its favor, and the series is genuinely well-written. Conversely, a series that is genuinely the product of its creator’s vision and interests but might carry an unfortunate message or soapbox situation can also be an issue. Symphogear seems as if it on some level has to go cheesy and get overloaded with all of those otaku interests, because that’s just what the creators think would be enjoyable.

I think the best example might just come from the main character Hibiki herself. Within the first four episodes, she’s shown to be this quiet girl with large, gentle eyes and a petite yet shapely figure who gains a mysterious power almost equivalent to that of a berserker. She’s shown to have a strong sense of justice, a willingness to get her hands dirty fighting, and a childhood friend who seems to be on a Daidouji Tomoyo level of “friendship.”At a distance, she can come across as this amalgam of desirable traits, and even upon looking more closely they still maintain that impression, but through the efforts of the animators and artists, the writers, and her voice actress Yuuki Aoi, her sense of being shines through. All of the elements that might be viewed as schlock when viewed with a cold, critical eye gain an air of warmth, and it feels possible to connect with Symphogear on a deeper level as a result. Perhaps it’s because Symphogear, more than even Kawamori’s own series, is the pinnacle of combining singing idols with space fighting faction, because the girls’ suits are literally powered by their voices.

With three seasons of Symphogear now in existence, I might assume that the series gets better as it goes along, but of course that’s never a guarantee. One thing I’ll be looking out for is, simply, what this inexperienced team ends up doing with the experiences they gather.